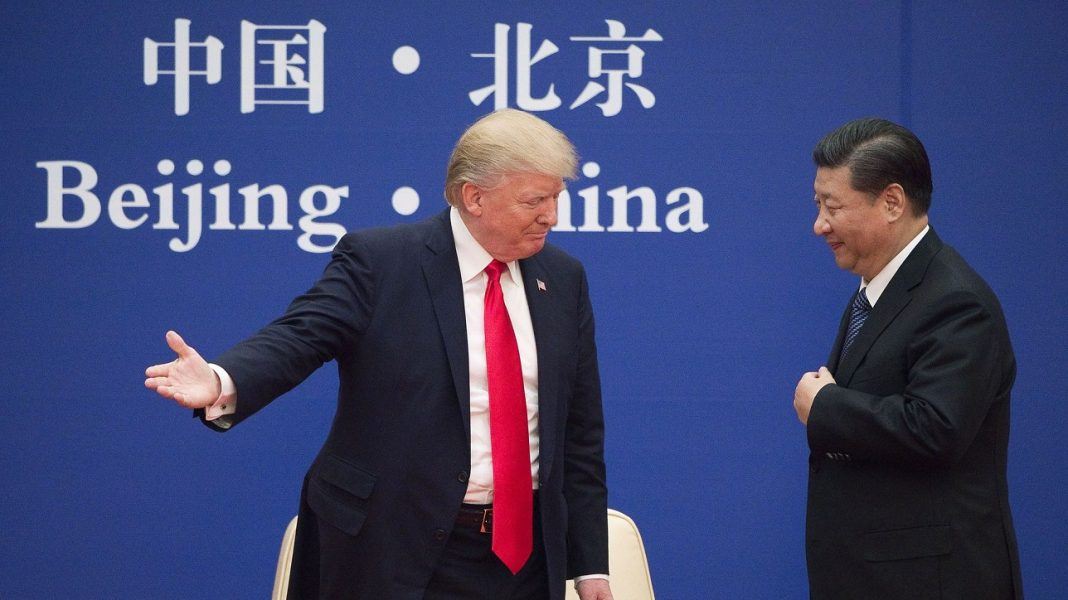 Even the most fervent of Donald Trump supporters will begin noticing the rising costs at their local Walmart or Target as his latest rounds of tariffs on China kicked on Friday. They will soon realize just how many products from China they rely on as food, shampoo, soap, electronics prices rise noticeably. While Trump continues saying that tariffs are good for America, here is the real breakdown on how they affect everyone, including you.

President Trump let loose with a morning round of tweets that sugar-coat the consequences of his trade war with China.

Trump minimized the worth of China’s purchases of U.S. goods and services, which support nearly 1 million jobs in the U.S., misstated the trade deficit and ignored the inevitable rise in many costs to consumers when imports are heavily taxed.

This, as his tariffs kicked in Friday on $200 billion worth of Chinese goods, with another round of tariffs in the offing, and as U.S. and Chinese officials negotiated in Washington. With trade relations between the economic giants seemingly rupturing and the stock market sinking, Trump called the talks “congenial.”

A look at some of his statements:

TRUMP: “Your all time favorite President got tired of waiting for China to help out and start buying from our FARMERS, the greatest anywhere in the World!”

THE FACTS: The notion that China doesn’t buy from U.S. farmers is false. China is the fourth largest export market for U.S. agriculture. It bought $9.3 billion in U.S. agricultural products last year.

As for calling himself “your” favorite president, he is addressing only his supporters, not the country. Polls find Trump’s approval rating to be high among Republicans but it generally ranges between about 35% and 45% among Americans overall.

TRUMP: “We have lost 500 Billion Dollars a year, for many years, on Crazy Trade with China. NO MORE!”

THE FACTS: That’s wrong. When sizing up the trade deficit, Trump always ignores trade in services — where the U.S. runs a surplus with China — and speaks only of goods. Even in that context, he misstated the imbalance.

Trump is also misleading when he puts the deficit in that ballpark for many years. It’s true the imbalance has long been lopsided. But the U.S. Trade Representative’s Office notes that exports of goods to China have increased by nearly 73% since 2008 and U.S. exports to China overall are up 527% since 2001.

Nor is the trade gap a “loss” in a pure sense. U.S. consumers and businesses get electronics, furniture, clothing and other goods in return for their money. They are buying things, not losing cash.

TRUMP: “Tariffs are NOW being paid to the United States by China of 25% on 250 Billion Dollars worth of goods & products. These massive payments go directly to the Treasury of the U.S.”

THE FACTS:  This is not how tariffs work. China is not writing a check to the U.S. Treasury. The tariffs are paid by American companies, which usually pass the cost on to consumers through higher prices. One of the theories is that the higher prices will encourage consumers to buy goods made in the U.S. or elsewhere instead. But the risk is that consumers could simply respond by spending less than they otherwise would, which would hurt growth.

The burden of Trump’s tariffs on imports from China and other countries falls entirely on U.S. consumers and businesses that buy imports, said a study in March by economists from the Federal Reserve Bank of New York, Columbia University and Princeton University. By the end of last year, the study found, the public and U.S. companies were paying $3 billion a month in higher taxes and absorbing $1.4 billion a month in lost efficiency.

A coalition of U.S. trade organizations representing retail businesses, tech, manufacturing and agriculture said this week: “For 10 months, Americans have been paying the full cost of the trade war, not China.” It said: “To be clear, tariffs are taxes that Americans pay, and this sudden increase with little notice will only punish U.S farmers, businesses and consumers.”

TRUMP: “Tariffs will bring in FAR MORE wealth to our Country than even a phenomenal deal of the traditional kind. Also, much easier & quicker to do. Our Farmers will do better, faster, and starving nations can now be helped. Waivers on some products will be granted, or go to new source!”

THE FACTS: In addition to repeating the canard that China pays the tariffs, he’s failing to account for the damage that tariffs can do.

By most private estimates, a trade war leads to slower growth rather than the prosperity that Trump is promising. The president’s tweet also goes beyond past claims that tariffs are simply a negotiating tactic to force better terms with China. Trump appears to be suggesting that a tariff increase would generate revenues that could then be spent on farm products and infrastructure, something that might in theory require support from Congress.

But on their own, tariffs are a clear drag on growth.

Analysts at the consultancy Oxford Economics estimate that implementing and maintaining the latest increase would trim U.S. gross domestic product by 0.3%, or $62 billion, in 2020. This would be equal to a loss of about $490 per household.

Economists at Nomura note that gross domestic product this year could take a hit of as much as 0.4% if Trump expands the taxes to all Chinese imports as business confidence slumped and financial conditions tightened.

Tariffs cover roughly half of Chinese exports to the U.S.

Trump has sought to pressure China to strike a deal by imposing tariffs on almost half of those imports. The U.S. has increased import taxes and broadened their scope since levying a 25 percent tariff in July on $50 billion of Chinese goods, mainly industrial parts, tools and electrical products.

The next move by the Trump administration, in September, consisted of a 10 percent tariff on another $200 billion in Chinese exports. Those tariffs jumped to 25 percent on Friday morning, for a wide array of food products, chemicals, clothing, accessories, toiletries and basic consumer goods.

Trump has threatened to impose a 25 percent tariff on the roughly $335 billion in Chinese products not yet taxed by the U.S. Such a move would affect almost every aspect of the economy and provoke a harsh response from Beijing in struggling U.S. sectors.

Farmers are in Beijing’s crosshairs

China imports much less from the United States than it exports, purchasing just $120.3 billion in American products last year. But the country’s tight grip on the U.S. agricultural economy is a key source of leverage in trade talks, and a likely target for another round of retaliatory tariffs.

China has responded to Trump’s tariffs by targeting major U.S. crops and agricultural products like soybeans, pork, corn, wheat and beef. The tariffs from China have put an enormous economic burden on farmers and ranchers already struggling to overcome plunging commodity prices and severe weather.

The administration has sought to limit that damage by sending $12 billion in aid to those harmed by tariffs, and may soon offer more. But agriculture advocates say tariffs from China and other nations in trade conflicts with the U.s. could cost farms crucial foreign contracts for years to come.

Expanding and increasing tariffs on Chinese goods would raise costs in almost every sector of the U.S. economy, particularly since import taxes are paid by U.S. purchasers of foreign products, not the country of origin.

Higher taxes on a broader group of goods would likely raises prices on basic food products, household goods and apparel. American manufacturers, meanwhile, would find themselves in a position where they have to pay more for certain parts from China, adding to pressure for them to counter those costs by boosting prices for their products.

Fitch Ratings warned Thursday that higher tariffs on Chinese goods could lead to lower revenue for U.S. companies, though low inflation and a strong domestic economy could help cushion the blow.

Economists with Japanese bank Nomura projected Friday that U.S. tariffs on all Chinese goods could trim 0.4 percentage point from GDP this year.

The trade war is only one source of major tension between the U.S. and China.

The U.S. and China have also battled over the treatment of major Chinese tech companies Huawei and ZTE, which Washington suspects of aiding Beijing’s intelligence operations.

There’s also growing anger among U.S. lawmakers who have blasted China’s detention of millions of Uyghurs, a Musilm minority group, in internment camps.

White House officials have sought to isolate trade talks from the administration’s various other disagreements with China. But lawmakers in both parties have called for a harsher crackdown on China for those problematic behaviors.

“I don’t think the Trump administration is putting enough pressure on China,” said Rep. Andy Barr (R-Ky.) on Thursday. “What I’d like to see the administration do is sanction Chinese banks that are circumventing North Korean sanctions.”

The president’s trade policy makes him an outlier among Republicans, who are typically averse to tariffs and in favor of free trade. While many members of his party share Trump’s concerns with China, Republicans say they are deeply worried about the domestic impact of tariffs.

Adding to the pressure is the mounting cost of Trump’s tariffs on steel and aluminum and retaliatory tariffs from allies like Canada, Mexico and the European Union.

GOP lawmakers from agricultural states have warned Trump about the heavy toll of his trade policy on farmers. Some senators are proposing limits on his tariff power, while others have implored him to quickly cement a deal with China.

“The way you deal with that is not using a tit-for-tat tariff war,” said Rep. Will Hurd (R-Texas) on CNN’s “New Day.”

“It’s going to be more expensive for Americans to buy products,” he said.