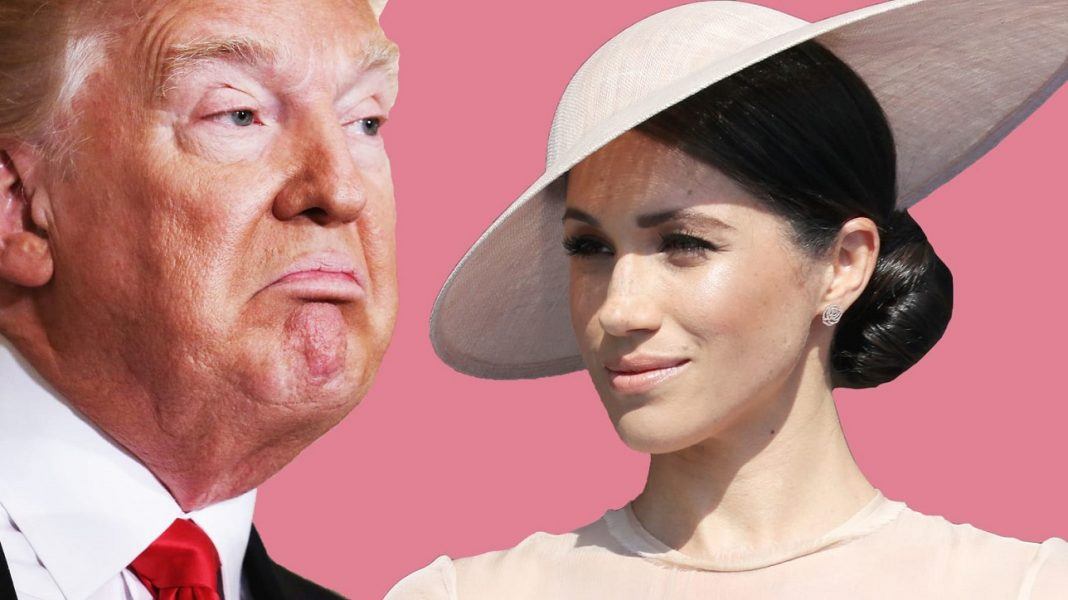 Donald Trump couldn’t resist making himself the center of media attention before his state visit to London by calling the Mayor of the city Sadiq Khan a “stone cold loser” after trying to revert on his Meghan Markle ‘nasty’ comment. President Trump insisted Sunday that he never called Meghan, the Duchess of Sussex and the wife of Britain’s Prince Harry, “nasty.”

The president used the adjective while discussing Meghan in a recent interview with Britain’s The Sun newspaper in the run-up to his state visit to the U.K. on Monday. But debate on social media since then has raged over whether his use of “nasty” referred to the duchess herself or the negative things she said about him in 2016.

Trump and his defenders have accused the news media of spreading a deliberately false narrative about him.

TRUMP: “I never called Meghan Markle ‘nasty.’ Made up by the Fake News Media, and they got caught cold!” — tweet Sunday.

TRUMP: “I made no bad comment” — he told reporters Sunday when asked about the comment as he left the White House for the trip to London.

THE FACTS: Trump, in fact, did use the word “nasty” to describe Meghan when asked about her comments about him during the 2016 campaign.

In audio of the interview posted on the newspaper’s website, Trump discusses the upcoming state visit, his second meeting with Queen Elizabeth II and the Trump family members who are tagging along on the trip. The reporter then asks about Meghan, who isn’t joining other royals to meet Trump and his wife, Melania, due to the recent birth of her first child, Archie, in May.

Asked if he was sorry to miss out on meeting the American-born Meghan and told that she “wasn’t so nice about you” during the campaign, Trump says: “I didn’t know that. No, I hope she’s OK. I did not know that.”

When told that Meghan once said she might move to Canada if Trump was elected, Trump responds: “No, I didn’t know that she was nasty.”

The former Meghan Markle supported Hillary Clinton, the Democratic presidential candidate in 2016, calling Trump “divisive” and “misogynistic.” The former actress also said she might move to Canada. “Suits,” the cable TV legal drama she starred in at the time, was filming in Toronto.

She ultimately married Prince Harry in 2018 and moved to Britain.

After the interview was released, reporters at some news organizations tweeted that Trump called Meghan “nasty,” sparking debate.

The case isn’t as clear as Trump portrays it to be, said Kathleen Hall Jamieson, director of the University of Pennsylvania’s Annenberg Public Policy Center.

Jamieson said in an email that since Trump’s interviewer is informing him about a statement that Trump says he was unaware of “one would ordinarily assume that his answer refers to that statement.” But she says the answer — “was nasty” — could refer to a person or to what the person said.

Complicating matters, Jamieson said, is Trump’s history of verbal attacks on people he views as antagonists and his sensitivity to negative statements about his election.

“As a result, difficult to know what he meant,” she said.

In the Sun interview, Trump also spoke positively about Meghan when asked whether it was good for an American to be a member of the British royal family.

President Donald Trump is making up facts about a veterans’ health care program in his latest dig at late Sen. John McCain.

He says he’s no fan of McCain, a Vietnam War veteran and tortured prisoner of war, faulting him for failing to pass a program that gave veterans the option to see a private doctor at public expense.

“He was never able to get Choice. I got Choice,” Trump said Thursday to reporters. His jab at the late senator came as he defended a Trump administration order to keep a Navy ship named for McCain hidden from view during his recent trip to Japan as likely “well-meaning,” though Trump said he knew nothing about the request.

But McCain did get it done on vets’ care.

Trump routinely takes full credit for enacting the Veterans Choice program, ignoring the fact that it was signed into law by President Barack Obama in 2014. McCain was a co-sponsor of the legislation to overhaul the Department of Veterans Affairs. What Trump did was expand eligibility for the program.

Meanwhile, Trump is also claiming exoneration and a possible case against him “closed” in the Russia investigation. But special counsel Robert Mueller, who announced this past week the end to his work, specifically declined to vindicate Trump on obstruction charges. Mueller indicated it was up to Congress to decide whether to take up continued investigations and bring charges of wrongdoing against a sitting president.

TRUMP: “I disagree with John McCain on the way he handled the vets, because I said you got get to Choice. He was never able to get Choice. I got Choice.” — remarks Thursday to reporters, according to a transcript released bythe White House .

TRUMP: “We passed VA Choice and VA Accountability to give our veterans the care that they deserve and they have been trying to pass these things for 45 years.” — Montoursville, Pennsylvania, rally on May 20.

TRUMP: “Another one they said could never get passed, they have been trying to do it for 40 years, we passed VA Choice. Veterans Choice.” — El Paso rally on Feb. 11.

THE FACTS: Trump was not the first president in four decades to pass the Veterans Choice program. What Trump got done was an expansion of the Choice program achieved by McCain and Sen. Bernie Sanders, the main lawmakers who advanced the legislation signed by Obama.

McCain, an Arizona Republican, co-sponsored the legislation following a 2014 scandal at VA’s medical center in Phoenix, where some veterans died while waiting months for medical appointments. Sanders was then chairman of the Senate Veterans Affairs Committee.

After helping pass the program, McCain also fought to expand it in his last months before dying of brain cancer last August. Trump signed the legislation last June, which is named after three veterans. The legislation’s full name is the John S. McCain III, Daniel K. Akaka, and Samuel R. Johnson VA Maintaining Internal Systems and Strengthening Integrated Outside Networks Act of 2018, or MISSION Act.

The Choice program currently allows veterans to see doctors outside the VA system if they must wait more than 30 days for an appointment or drive more than 40 miles (65 kilometers) to a VA facility. Under the expansion, starting Thursday, veterans are to have that option for a private doctor if their VA wait is only 20 days (28 for specialty care) or their drive is only 30 minutes.

Still, the VA says it does not expect a major increase in veterans seeking care outside the VA under Trump’s expanded program, partly because wait times in the private sector are typically longer than at VA. “The care in the private sector, nine times out of 10, is probably not as good as care in VA,” VA Secretary Robert Wilkie told Congress in March.