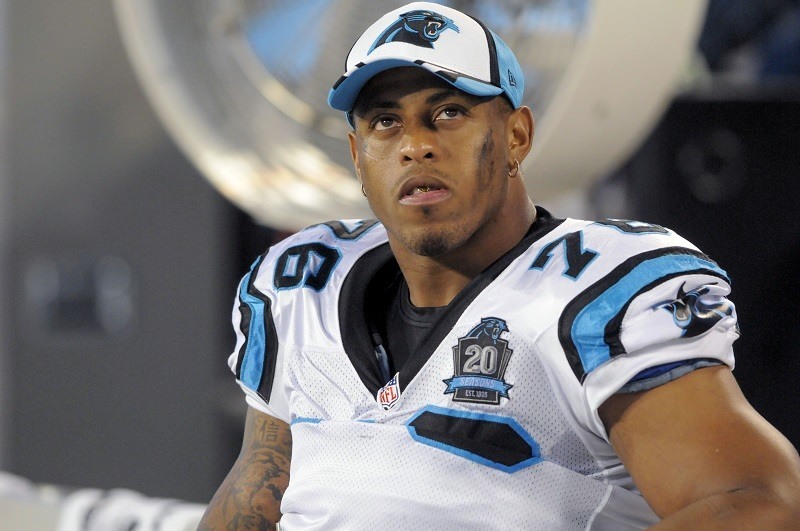 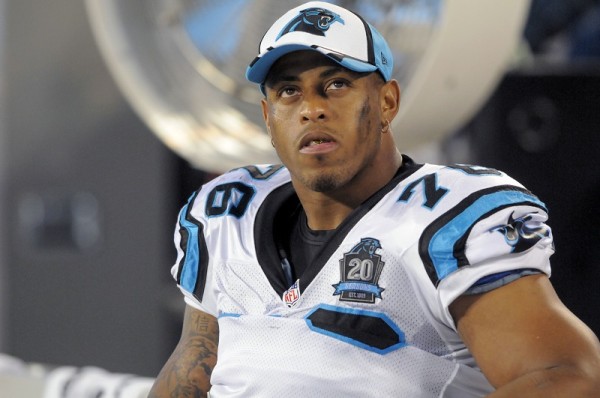 One would think that the Dallas Cowboys Greg Hardy is actively trying to end his own career. He seemingly cannot get out of his own way. After missing all but one game last year due to his domestic violence charge, he found a way onto the Cowboys roster with a nice new contract. A fresh start for a guy that would have been out of the league had he not been such a force on the defensive line.

However, that fresh start isn’t going so smoothly. He has already had an altercation with a teammate during practice and been called a woman beater by said teammate. Now Hardy has done some more damage to his already stained reputation via Twitter. This genius decided it was a good idea to tweet the following in response to a tweet about Carolina’s “twin towers” combo at wide out:  “didn’t the twin towers get blown up lol.” Just let that soak in for a moment. The guy had to think the thought, make the conscious decision that others would find it just as humorous as he himself, then take the time to tap it out on his phone and hit send.

I don’t know how else to say it, Greg Hardy is a simpleton. He gets suspended for allegedly beating his girlfriend, is fortunate enough to have a contending team like Dallas pick him up with all his baggage, then decides to share his comedy routine involving the 9/11 attacks with the Twitterverse. Jameis Winston thinks Hardy needs to get his act together. Dallas’ newest defensive star is the perfect example of a high profile athlete living in his own bubble and not having a clue about the real world around him.

Since hardy is off to such a poor start in Dallas, clearly the team needs some guidelines to keep him on the straight and narrow. The only news Hardy needs to make is quarterback sack headlines. So I have ten tips for the Cowboys that may help keep their high profile free agent in check.

10. It would be best to ban Hardy from the Dallas Zoo. A guy like this could find it entertaining to club some baby seals to death in front of onlookers. Sound crazy? In his mind it’s OK to “LOL” at his own twin towers joke. Attacking small cuddly animals at a zoo is probably not out of bounds either.

9. Dallas should try and get a league exemption for some medical marijuana for Mr. Hardy. I know the NFL doesn’t want its players on the hippie lettuce and altering their state of mind. But Greg Hardy’s normal state of mind isn’t good for anyone. Some mary jane might actually heal this confused fellow and allow him to blend in with normal human beings.

8. Hardy will need a full time babysitter to keep him out of trouble and “fix” things when he screws up. Former Cowboy Charles Haley would be the perfect Winston Wolf to keep Hardy between the lines.

7. The Cowboys would be wise to find some semi-pro football league for Hardy to play in until his suspension is over. That will keep him busy and hopefully out of trouble. They could tell him these are real games that count toward the regular season and I doubt this guy will know the difference.

6. Idle hands are the devil’s workshop so Hardy needs to be kept busy. Perhaps Dallas can get him hooked on the hottest new video game, something violent of course. Or maybe set him up with the best of Netflix and HBOGO on a nonstop binge watch of some shows in his down time. Watching “House of Cards” will be a safer use of Greg Hardy’s time.

5. It’s probably best if Jerry Jones and Hardy don’t hang out together. Jones isn’t known as the best decision maker himself and any time spent in the company of Hardy just ups the chances of lawsuits for both guys.

4. A filter on Hardy’s internet is a must. Dallas could set up a gadget to make his tweets, Instagrams, and Facebook posts go nowhere near the real internet. Or they could hire a couple of overseas freelancers to monitor his activity 24/7 to head off any stupidity that he sends out to the public.

3. Charity events are nice things for pro athletes to participate in normally. However I can see Greg Hardy saying something harmful to a sick kid at a hospital visit or ruining a “Make a Wish” opportunity for a fan. Nice things are not his cup of tea I’m afraid.

2. A service dog could be the answer for a guy who can’t stop derailing his own career. They have dogs that help the blind of course and even canines that help people with emotional troubles. Hardy could use such a dog to alert him when he is about to get himself in trouble. A bark as a warning and a bite when he is almost over the edge of stupidity could save his career over time.

1. No media contact at all. Who knows what this imbecile will say when he is asked a tough question. The twin towers remark was offered up all on his own. Jerry Jones will be better off paying the fines for Hardy’s media silence than the owner will be if Hardy is available to share his brilliant thoughts on a daily basis with the media.

It does appear that Hardy has decided to take a long break from Twitter as the above Tweet response puts it pretty bluntly.