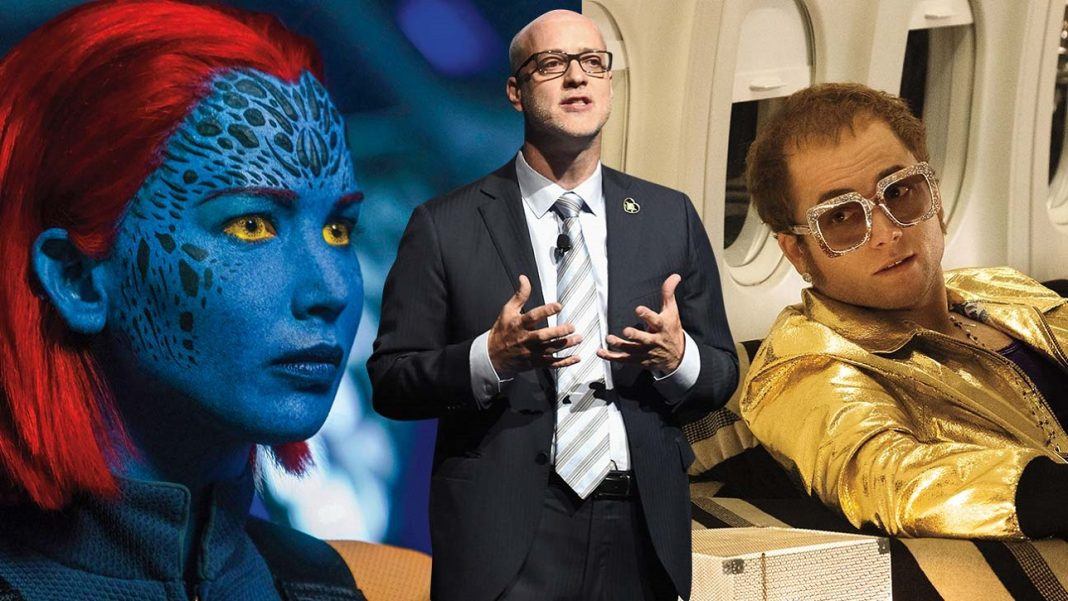 Kevin Hart has already been crowned Star of the Year at this year’s CinemaCon, but the big elephant in the room will be Netflix. After Steven Spielberg had his say on the streaming network’s award chances, the spotlight will be on streaming services.

The schedule looks to be much lighter this year with Fox being pulled into the Disney Family, Sony‘s noticeable absence and Amazon skipping it’s annual luncheon. That doesn’t make the event less noteworthy as more eyes will be focused on the studios and theater owners.

The movie industry — everyone from the Hollywood studios that produce the films to the companies that make the screens, speakers, and seats in theaters — are descending on Las Vegas this week for CinemaCon. The future of film going will be in the spotlight as the annual trade show kicks off Monday at Caesar’s Palace.

There will surely be much celebration and self-congratulation for the record 2018 box office year, which exceeded $11.8 billion in ticket sales in North America, and recent successes like “Us” and “Captain Marvel.” Yet this year’s CinemaCon is coming at a time of great change in Hollywood. Streaming and how long movies play in theaters have been a conversation staple at CinemaCon in recent years, but Walt Disney Co.’s just-completed acquisition of 20th Century Fox will be the elephant in the room.

“People are really wondering what this consolidation is going to look like for the entire business,” said Kevin Grayson, the president of domestic distribution for STX Films.

On a practical level, it means there won’t be a separate presentation from Fox, which always staged an elaborate production, usually involving its former distribution chief in some kind of costume.

“We will absolutely miss the Fox presence, but we also need to support and embrace Disney for what they bring to our industry and what they’re going to look to do to further bolster the distribution line of great product,” said Mitch Neuhauser, the managing director of CinemaCon. “It’s going to be a very bittersweet convention. But we will change with the times and move forward in a productive way.”

In other words, the show must go on. Disney, which has been the market-leader for three years running, along with three of the other major studios, Universal, Warner Bros. and Paramount (Sony is sitting this year out), will come armed with splashy new footage, trailers and some of their biggest stars to hype their slates for the summer movie season and beyond to an audience of theater owners, from the biggest chains to the smallest mom and pop shops.

It’s not just the biggest studios: Lionsgate, Amazon, Neon and STX Entertainment will also be present, with some showing sneak peeks of upcoming films like “Wild Rose,” ″Late Night” and “Long Shot.”

STX will kick off the main studio presentations Tuesday morning after a few remarks on the state of the industry.

“It really gives us that opportunity to shine a light on STX and show that we are not here for the short term, we are here for the long term,” said STX’s Grayson.

STX specializes in mid-range and mid-budgeted commercial films like “The Upside” and “Second Act,” and CinemaCon is an essential space to interact with not only the big players in exhibition but the people who own “twins and triples” in the middle of the country that are just as essential to their business.

“We’re releasing 10 to 12 films this year and 12 to 15 next year, “Grayson said. “So when the other studios are making the tentpoles, it allows us to fill that gap. ”

Outside of the main theater, there will also be a whole world on the trade exhibition floor showing the latest and greatest in everything from theater technologies to concession snacks.

“There has been a non-stop momentum of new technology that is driving the industry,” said Neuhauser.

Ray Nutt, the CEO of Fathom Events, which specializes in event cinema, from classic movies to the Metropolitan Opera and even sporting events, agrees.

“That box office record doesn’t just happen because there’s good content out there,” Nutt said. “It happens because the amenities in the theaters are awesome these days, whether it’s luxury seating or enhanced food and beverage. These are all things that make going to the movie theater special and one of a kind.”

Julien Marcel, the CEO of Webedia Movies Pro, a tech and data company for the theatrical industry, predicts that there will also be much discussion over the “second digital revolution” in movie going.

Marcel’s company recently published a study that said there was 18.7 percent growth in online ticket sales in 2018. Movie tickets purchased online currently make up about a quarter of all ticket sales.

He also expects there to be a lot of focus on the “subscription economy.” MoviePass might be struggling, but AMC and Cinemark have found successes with their own models and more companies are gearing up to do the same.

And even with all the changes afoot, the mood as ever going into CinemaCon is optimism.

“I’ve been around this business for 30 years now and it was always something that was coming along whether it was cable television or the VCR that was going to kill the industry,” said Nutt. “But people in this industry keep innovating in different ways to keep people coming back out to the theater to have that communal experience. It’s pretty gratifying to see the resiliency of the industry.”

Studios say yes, theater owners say no way. The issue of windowing, the amount of time that major releases remain exclusively in theaters, is a prickly one. But it will likely be raised in some way at CinemaCon, particularly with Comcast (corporate parent of Universal), WarnerMedia (corporate parent of Warner Bros.), and Disney all poised to launch streaming services in the coming months. As these players invest in premium content the lines between theatrical movies and streaming shows will continue to blur. In order to justify the tens of millions they spend distributing movies and advertising them, studios argue that they need to be able to release them on home entertainment platforms earlier. Theaters counter that doing so would cannibalize their revenues and would encourage consumers to just skip the multiplexes in favor of streaming a hot new release when it lands on the on-demand platform of their choice within a matter of weeks. This debate isn’t going away any time soon.

Most theater owners would say the latter, but the situation is becoming more complicated. After being dismissive of cinemas as anachronisms, the streaming leviathan is making more of an effort to play nice. Initially, Netflix insisted that all of its movies debut on its streaming service at the same time they premiered in theaters. But that’s changing. “Roma,” for instance, was in theaters for three weeks before it started streaming, and Martin Scorsese’s upcoming Netflix release “The Irishman” is expected to have some sort of exclusive theatrical run. Most major chains refuse to show these movies however, because they debut on Netflix within weeks of their opening. They want the streaming service to adhere to the roughly 90-day exclusive theatrical window that other studios honor. Can these two sides find some common ground?

With Sony sitting out CinemaCon and Amazon opting to just screen “Late Night,” this year’s gathering looks a little light on the presentations. Plus, Hollywood is down a studio. Twentieth Century Fox could reliably be counted on to put on one of the biggest shows of any CinemaCon, replete with dancing showgirls, full size orchestras, and, in one instance, Vanilla Ice. However, there will be no Fox presentation this year as Fox, at least in its standalone incarnation, is no more. It has been purchased by Disney as part of a $71.3 billion, industry-shaking, mega-merger.

Plus, the absence of Sony, which apparently thought it wasn’t worth it to spend $2 million-plus hawking the next “Spider-Man” to exhibitors, means that theater owners won’t get a look at the studio’s upcoming releases. That means no sneak peek at Quentin Tarantino’s “Once Upon a Time in Hollywood,” “Men in Black: International, ” or “Spider-Man: Far From Home.”

The loss of Fox points to another troubling problem. Theater owners will have one fewer studio providing product for their screens. That means that their customers will have fewer choices on any given weekend. And that’s not good for business.

4.) What Will be the Sleeper Hits?

Everyone knows that “Avengers: Endgame” and “The Lion King” will be box office winners. You don’t have to sit through Disney’s CinemaCon presentation to make that kind of prediction. Where CinemaCon is most valuable is in giving theater owners a sense of what lower profile releases have the potential to break out in a big way. Ang Lee’s “Life of Pi,” Matthew Vaughn’s ‘Kingsmen,” and Bradley Cooper’s “A Star is Born” are just a few of the films that got a big boost from strong showings at CinemaCon. This year upcoming releases such as “Gemini Man,” a trippy thriller that unites Lee and Will Smith, “Motherless Brooklyn,” a murder mystery directed by and starring Edward Norton, and “The Woman in the Window,” an adaptation of A.J. Finn’s best-selling novel, could all see their fortunes rise if they nail the landing at CinemaCon.

Of course, CinemaCon cuts both ways. It can also give reporters who attend and theater owners a pretty good sense of what films are likely to be turkeys. One look at “Geostorm” or “Mortal Engines” was all most people needed to predict they had a date with flophood.

5.) Are Subscription Services Here to Stay?

MoviePass was all the rage at last year’s CinemaCon. Twelve months ago, the company had disrupted the exhibition space with its low-cost subscription model and its ambitions to be the Netflix of moviegoing. However, the company has suffered a steep fall in recent months and is currently teetering on the brink of insolvency. MoviePass, it seems, could not make the math work. It was losing money nearly every time on of its subscribers bought a ticket.

But are subscription services here to stay? AMC and Cinemark have introduced their own MoviePass-like services. Moreover, before MoviePass began suffering financial problems, millions of people signed up for the service, which would indicate that audiences like the idea of a subscription service. Now comes the difficult task of finding a sustainable business model.