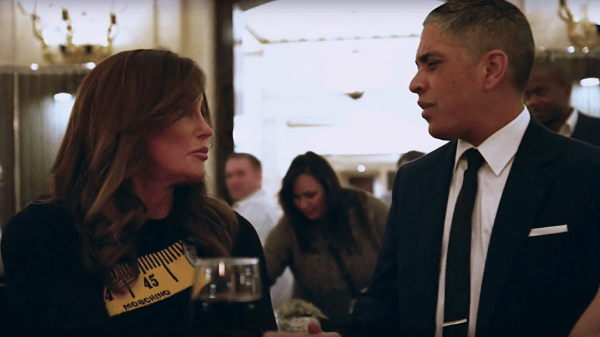 This week an all-new episode of I Am Cait’s 2nd season aired, titled “Partner Up.” On it, the ladies part ways for most of the show, as Caitlyn Jenner goes off to New York to accept her “Woman of the Year” award from Glamour magazine.

Before the group split up they are seen going out for the evening while they were still stopped in New Mexico. Here Candis reveals that she has been talking to a guy through an online dating site and he said he would meet her at the hotel bar where they were all hanging out. Unfortunately Candis winds up getting stood up, which prompts Caitlyn to confess that she is scared to get back into dating because she has never dealt with the “rejection” that many of her transgender friends encounter regularly.

Shortly after, Caitlyn is seen showing off her brand new driver’s license, which is completely updated with her new female identity. While the ladies congratulate her, Caitlyn gets emotional as she explains that it feels like she is saying goodbye to Bruce once and for all. Throughout the series, Caitlyn has talked about how she has been ready to be a woman for her whole life. Therefore, it was interesting to hear another side of her story. Caitlyn got teary, as she said, “Bruce was a good person…and sometimes it feels like he [doesn’t] deserve to be gone.” Nonetheless, she acknowledged that it was time to move on with her life, which entails embracing herself as Caitlyn.

The next day the group heads to a salsa class, where Candis hopes that she can get Caitlyn to embrace more of her femininity. When they get there, things don’t go as Candis had planned, as Caitlyn refuses to dance with the male participants. She ends up getting Candis to dance with her and explains that she doesn’t yet feel comfortable getting close to men like that – especially strangers.

Soon after Caitlyn is seen arriving in New York and preparing for her big night at Glamour’s event. Unfortunately Caitlyn’s date, her daughter Kylie, ends up being very late as she has a last minute wardrobe malfunction. In confessional Caitlyn admits that she was disappointed that she couldn’t share the experience with Kylie. After the event, Caitlyn confronts Kylie about being a no-show for the red carpet portion of the night. However, Kylie adamantly defends herself, stating that her dress completely ripped and the cameras would have captured much more of her than she would have liked.

Meanwhile, the other ladies continue the road trip sans Caitlyn. They end up stopping at a restaurant right outside of Texas to get a bite to eat. Minutes later they are seen walking out as apparently the owner did not want them eating there after he found out what show was being filmed. It is a shame that Caitlyn wasn’t there to experience this firsthand, as so far it seems like she hasn’t had to face the discrimination that the other ladies, and much of the transgender community, have.

Fortunately, the crew keeps their heads held high and continues on route. They end up stopping at a rock climbing facility, where they meet up with two transgender men (one of which is model Arin Andrews, who posed for a Barney’s campaign). The ladies have a good time flirting and socializing with the two men. Eventually, they wind up inviting them out for a fun-filled night at a local bar. Here Candace continues to hit it off with Arin’s friend and has a revelation that perhaps she needs to consider dating transgender men, as she hasn’t had the best of luck with dating straight men. 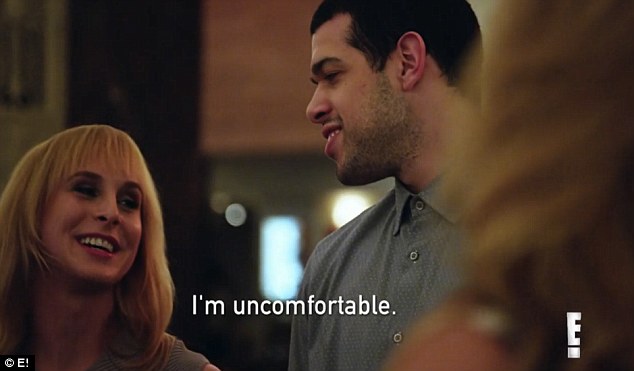 Towards the end of the episode, Caitlyn Jenner flies back out to meet up with the other ladies in Chicago. While at their hotel lounge the girls try to get Caitlyn a bit more comfortable with flirting with men. However Candis quickly points out that Caitlyn “doesn’t really know how to talk to guys at all…so she doesn’t know how to follow. She wants to lead.” This is fairly evident, as clearly Caitlyn continues to exhibit some of the habits she surely picked up from when she was living as Bruce.

After Caitlyn winds up leaving the lounge, Candis proceeds to confront her back in their hotel room. Candis tries to make it clear that while she isn’t trying to push Caitlyn into anything but she also believes that she needs to make more of an effort to embrace her femininity. Caitlyn acknowledges this but explains that she is scared of dating as a trans woman. She candidly states, “Guys might want to have sex with you, but then they don’t want to be seen with you. I’d have a hard time with that.” Caitlyn then goes to tell Candis that she is also scared what her daughters will think if she dates a guy. She explained, “I think it might be a little bit tougher on the girls if [I dated] a guy. If I was dating some guy they would go, “Wow!’” In confessional she went on to admit that she felt her daughter’ would be even more confused if she began dating men. Candis tries to comfort her and tell her that she is allowed to have fun and experiment, as no one – even her daughter’s – are judging her.

While Caitlyn and Candis are trying to talk through Caitlyn’s problems, Jenny and Zackary are also deep in conversation. Jenny is explaining her point-of-view, as she doesn’t feel as connected to drag as the other ladies (specifically Chandi) want her to. Jenny explains that she feels that a lot of people view drag as men “pretending to be women,” however she is not pretending to be anything. Zackary acknowledges her feelings and explains that the trans community is diverse, and everyone within it has a different story. In the end, Jenny decides to attend the drag event in which Candis and Chandi are performing at, as she wants to show her support for her “sisters” even if she doesn’t necessarily connect with drag personally.

The episode concludes with Chandi reprising her stage persona “Chandelier” and joining Candis for a lively dance performance while the other ladies cheered on in the crowd.

You can catch more from Caitlyn and her crew when it returns next Sunday, March 27 on E!

Caitlyn receives backlash from members of the trans community who feel she is misrepresenting them. The group heads to a Democratic debate, where Caitlyn comes face-to-face with presidential candidate Hillary Clinton.