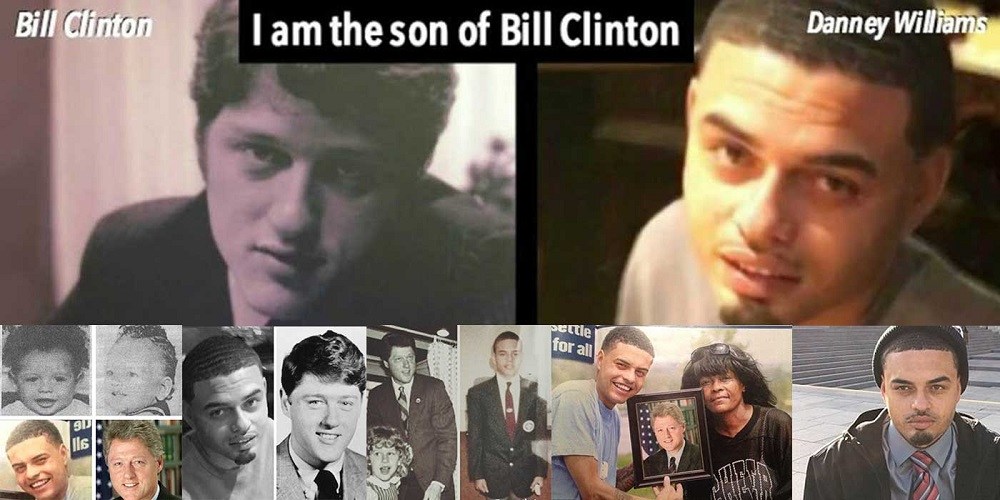 We are literally 26 days away from electing a new president, and the candidates are not holding back in their quest to further tarnish their opponent’s name. Just as we deal with the undeniable truth of Trump’s diabolical view of women, a story about Bill Clinton’s alleged illegitimate son that has been a long time in the making gains traction amongst Trump supporters and certain media outlets. Notice I said certain. Reputable outlets aren’t really touching it. With Fox News’ reputation, if this were a legit story, they would have been all over it as they are not ones to waste a chance to bash the Democrats. That fact, as well as other aspects of the situation that don’t add up, is the reason why I’m giving this story the side eye.

Here’s the thing, it’s no secret that Bill Clinton likes the ladies. Hell, I was a young girl when the whole Monica Lewinsky scandal happened, and even as a child I knew that wasn’t a good look. But Danney Williams, the black man claiming to be Bill’s 30-year-old abandoned son, is going about this the wrong way and because of that, he lacks credibility. I mean the guy has a Facebook page with an about section that reads, “My name is Danney Lee Williams, I’m the son of the 42nd President of the United States Bill Clinton.” If that isn’t opportunism then I don’t know what is.

I have heard this story in the past and I would be lying if I said that Williams doesn’t resemble Clinton. In fact, when I first caught wind of it and saw the pictures, my initial reaction was, “Dayum, that’s his daddy.”

To say that it is convenient timing for a story like this to blow up is an understatement. A bombshell of a video in which Donald Trump is heard and seen showing his true colors has sent his campaign and the GOP into a whirl. With that, I don’t put infidelity or the existence of a love child past any man with power, but there are some things that just aren’t adding up for me.

First of all, Williams is doing too much. He has a video on his FACEBOOK FAN PAGE (yea you read it right) that was just posted two days ago. In it, he tells the heartbreaking story about how he was “banished” by the Clintons, even though everyone in Arkansas knew that Bill is his father. “I see him in me, you can see a black Bill Clinton. When I brush my hair, I can see Bill Clinton with waves in his hair,” Williams says in the video. His mother is also seen on the tape telling the story about how she went to the Clinton’s house after having Danney and getting the door slammed in her face by Hillary. Um, I would slam the door in your face too if you came to my house claiming to by my husband’s mistress. I would do a lot more than that, but I won’t get into specifics.

The way the story is being told only serves to put the Clinton’s in a better light in my view. Or rather, have no weight on public opinion about them. They are no angels, we all know that, but Williams’ narrative is all over the place. At one point, he says the Clintons never helped and then he turns around and says that his mother regularly got $700 placed in her mailbox. They also received Christmas presents according to Williams. 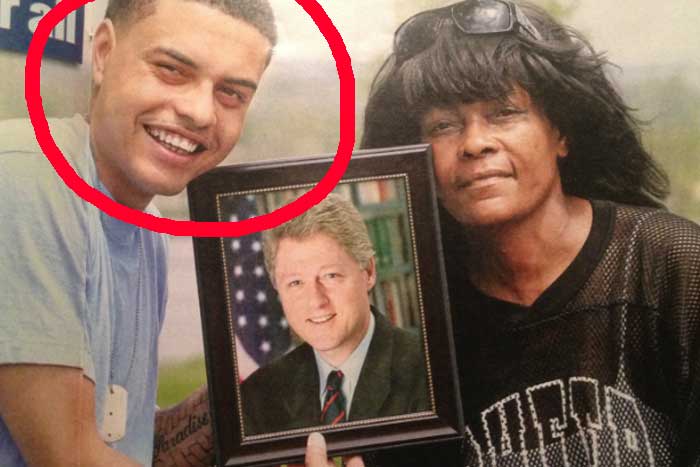 Now, if Trump supporters really wanted to make an impact with this story, they would have gone about it in a different way. You know, with undeniable facts. But they didn’t and that’s more than likely because there aren’t any. And since it is clear the GOP is in major disarray thanks to their candidate’s crumbling public image, they want to get the attention off of them. Well, news flash folks, this is not the way to do it. It just makes the ones pushing it look bad. Furthermore, the Clinton’s remaining silent about it is a smart move. Acknowledging it in any way will definitely put them in the spotlight for a story that will have little to no affect on public perception of Hillary. That is if it continues as is. If somehow, someway it is found that Clinton is indeed Williams’ father, well then that is a different story.

Trump and his people are scrambling right now and honestly, you can tell. They are desperate. They are rushing, and they are being sloppy. This campaign is about Hillary. To put things in perspective, I don’t know very many women who would put up with a love child. Even if Clinton’s have secretly acknowledged Williams, I wouldn’t fault Hillary for not wanting to have anything to do with him. But that’s just me.

The thing that makes me most suspicious of this story is that it’s coming more from the conspiracy people, and Alex Jones has been proclaiming Williams to be “very, very credible.” Jones went on to say about the alleged ‘love child,’ “You yourself got three children. No record. Hard working guy.” 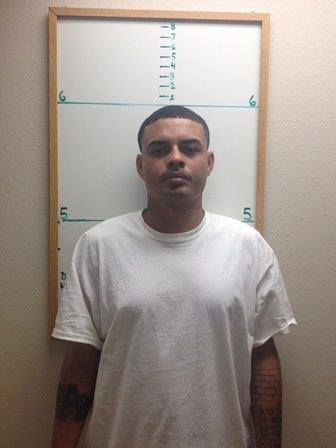 It turns out that Danney Williams is a convicted felon and ex-con who fathered five children by the time he was 21. He has been sued by state officials for not paying child support, and he was just released from state prison last year. This is timed rather conveniently to when he began that famous Facebook page claiming Bill Clinton as his father.

Alex Jones has tried to make it look like Williams is a victim who is not looking for a payday, but the way that he’s working every angle of his story to get press coverage says otherwise. If this was the real deal wouldn’t Fox News be all over this kid? You would think that someone like Alex Jones, who’s been ‘uncovering’ things for decades now would have done a simple background search on the kid before placing those angelic wings on him.

Above is a Circuit Court filing, and in none of this kid’s legal documents is there ever a mention of Bill Clinton as his father. Danny Williams Sr is listed as his father.

As detailed in Circuit Court filings, Williams pleaded guilty in 2005 to stealing a Cadillac that was parked in front of the owner’s Little Rock residence (the keys to the vehicle had been swiped during a burglary the prior day). While boosting the Cadillac, Williams somehow set off the vehicle’s alarm, prompting the owner to dial 911.

During a subsequent police chase, Williams crashed the car and fled from the Cadillac. He was apprehended by cops after a short foot chase.

Williams pleaded guilty to a pair of felony charges and was sentenced to five years probation and 50 hours of community service. He was also ordered to pay $4500 restitution, a $500 fine, and court costs.

During the following years, Williams’s probation was revoked three separate times (in 2006, 2007, and 2009). In each instance, he pleaded guilty to violating terms of his release. Williams, court records show, repeatedly failed to report to his probation officer, did not pay restitution, and failed to complete his community service obligation. Additionally, he did not complete a drug treatment program, which was ordered after his first probation revocation.

After being given multiple second chances, Williams was incarcerated for more than six months (he was released from state prison in late-February 2010).

A 2007 report prepared by a probation officer noted that Williams “stated that he began using marijuana at age nine” and currently “uses three times a week.” In the report’s family history section–which was “taken primarily from the statements of the defendant”–Williams is identified as “the son of Danny Williams Sr, age 54, and Bobbie Ann Williams, age 45.” 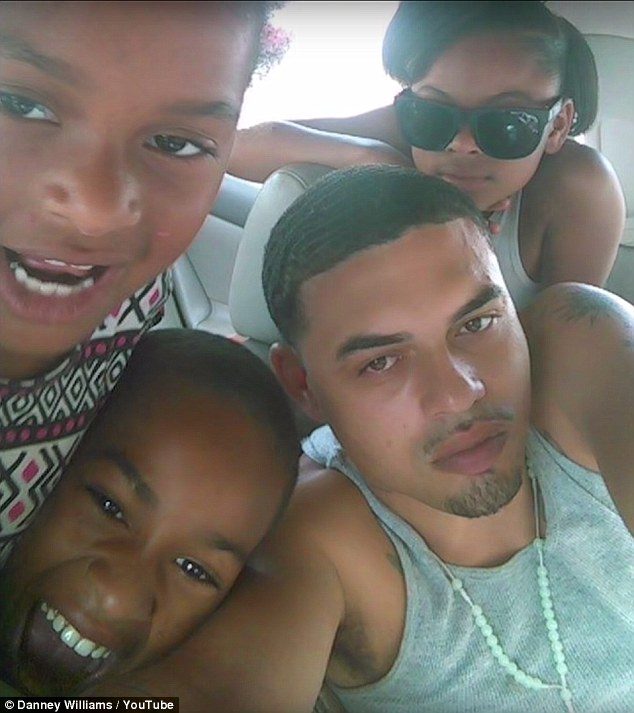 The probation report also noted that the unemployed Williams was the unmarried father of five children, including a one-year-old, an eight-month-old girl, and a six-week-old girl.

Williams, whose rap sheet includes several vehicular arrests, was busted in 2011 on a misdemeanor hot check charge (for which he pleaded guilty and was ordered to pay restitution.)

After failing to make good on the bad check, Williams was arrested in September 2014 on a contempt charge. He subsequently pleaded guilty and was sentenced for the misdemeanor count and a parole violation rap. Williams served more than seven months in custody, time split between a county jail and the Arkansas state prison system. He was freed from custody in late-May 2015.

Within a few months of his release, Williams aggressively began marketing himself as Bill Clinton’s illegitimate offspring. He opened a Twitter account that declared, “I’m the son of the 42nd President of the United States- Bill Clinton.” Tweets to his 13,200 followers include the hashtags #ClintonKid or #BillClintonSon. Williams also started a Facebook page, which lists his name as “Danney Williams-Clinton” and contains photo comparisons of him and Clinton.

I know our editor has known Jones for years, but even he knows that InfoWars isn’t the most reliable of sources all the time too. He’s just very open to people from all walks of life and politics and why our site isn’t strictly liberal, conservative or moderate. As our readers know our writers cover the entire political spectrum.

Could Danney Williams be Bill Clinton’s son? Sure. The more relevant question that needs to be asked is, do we really care?