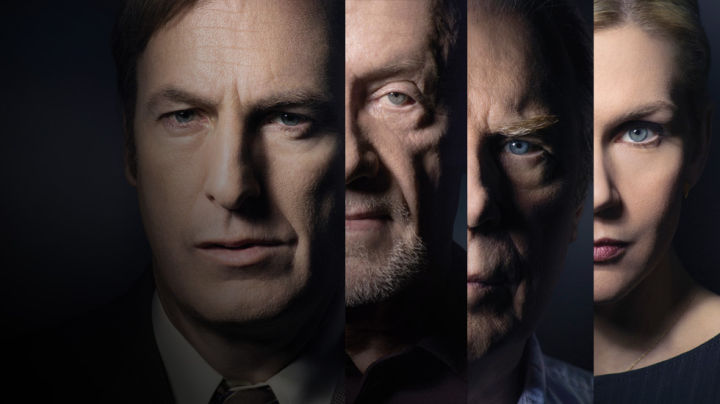 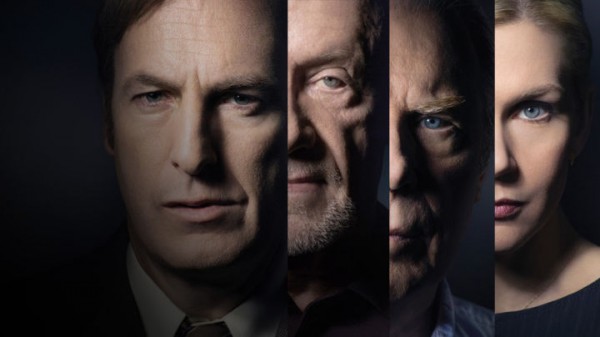 AMC played it smart in using “The Walking Dead” to lure viewers over to “Better Call Saul” and they put a second episode on the next night giving us a mini-binge of the “Breaking Bad” prequel. It’s worked for the massive ratings it’s drawing, but even better, it’s a worthy follow-up to it’s predecessor.

The second episode got off quickly with Tuco telling his grandma that she should just watch her stories while he deals with the two hustling skaters. Tuco knows how to get rid of a senior citizen in order to lay down a beating to those in need. The two skaters have no idea who they are messing with still, as they insult Tuco’s granny and show no respect whatsoever to Tuco. The two skinny boys should learn to read people a bit better if they are gonna be in the con game. When Tuco cracks the guys with granny’s walking cane, they must have realized at that moment that they were in over their nappy heads. Lesson to all you would be scammers, don’t threaten someone unless you are 100 percent sure they will not attack you physically.

While Tuco is handling his business downstairs, ‘grandma hit and run’ is enjoying a snack on her Hyman Roth lunch tray while watching her stories. She can’t ignore all the thumping and banging going on below her, so she checks it out only to be assured by Tuco that everything is fine and he is taking care of the matter. What grandma is going to doubt her grandchild, especially after the two skaters have acted a fool at her home.

Our boy Saul, better known as Jimmy McGill at this point, makes the mistake of being the one who knocks on the door of Tuco. Claiming to be an “officer of the law” was not the right move either. Tuco puts the biggest pistol known to man in McGill’s face and brings him inside. McGill is nervous enough without seeing the blood stain on the rug, which granny is plenty concerned about as well. She just cares about the rug though.

Jimmy uses his bronze tongue to wade into the issue of whether his clients are still alive. Crazy Tuco seems to halfway believe the story that they just got the wrong house in a zany mix up. Jimmy wants to just leave as if none of this lunacy ever even happened. It turns out that both clients are still alive and tied up in the garage. That’s good news, but the bad news is that the skaters are still really dumb. The second the duct tape is off one of the guy’s mouth he starts to blame Jimmy for this entire mess. If I’m laying on the floor tied up with tape over my mouth, I would take a few seconds before saying anything. The skaters were not doing too well before Jimmy arrived on the scene so they should have given him at least a minute to see where it went. All three were on their way out of danger, but the loud mouth put them back in mortal danger. 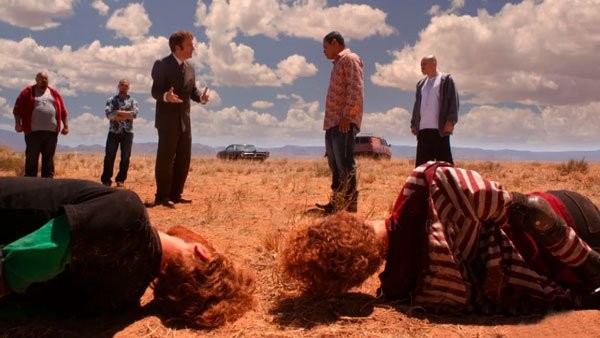 Out of the frying pan and into the fire of the desert went the three scammers. Tied up in the desert is about 10 times worse than tied up in a residential garage. Neither situation is great, but the former is just more convenient to bury a victim. Jimmy McGill tries something that Saul would not use as much in the future, the truth. He tells Tuco all about who the scam was intended for and that they just got unlucky by getting hit by his granny. The truth didn’t work very well and Tuco went on the offensive with a toolbox full of torture. He was convinced that these guys were some kind of undercover police force, so Jimmy told the nut job just that. A man will say anything if he is about to have his fingers disconnected with a pair of pruners. Lies were about as helpful as the truth since Tuco ordered them killed after Jimmy claimed to be with the FBI. Lucky for Jimmy, Tuco’s partner Nacho Varga didn’t believe the story and convinced the maniac that they didn’t have to whack the lawyer. Tuco agreed but still felt the need to defend his granny’s honor by wasting the skaters. 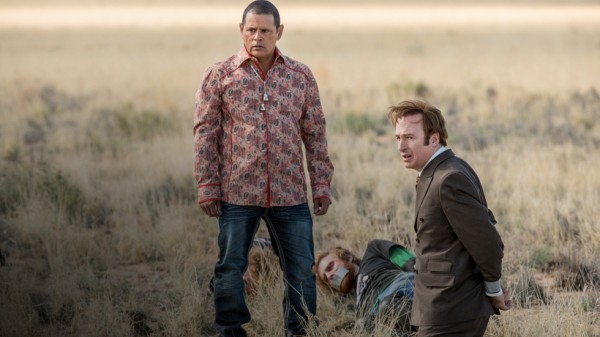 If I’m Jimmy, I just walk away from this mess and get back to another money making idea. And that’s just what happened, except Jimmy felt the tinge of guilt since he was the one who enlisted the skate bros after all. I was a little surprised at his change of mind, but he is not an evil guy of course. It would have been a bad look for the hero to let these two get killed because of his plan. To be fair, they were the ones who screwed up and followed the lady and went in her house. I will likely be justifying Jimmy McGill’s actions just as I did with Walter White, all the way to the end.

Jimmy spent the next few minutes trying to convince a neanderthal not to kill his guys. Tuco is not very reasonable of course, so Jimmy put on quite a show. He puffs up the drug dealer’s ego by making it out like Tuco is the judge in this case….which he is in fact. Judge Tuco finally agrees to simply break a leg on each of the skaters after McGill’s impassioned lie about how their moms would be hurt if they were killed off. Knowing a broken leg is coming isn’t easy on one’s mind and these two weaklings freaked right out. Jimmy carried them to the ER once they were free to go and was insulted by skater #1 saying McGill was the worst lawyer in the world. Jimmy replied, “Hey, I talked you down from a death sentence to six months’ probation. I’m the best lawyer ever.” He had a solid point.

Jimmy has a hard time with what went on in the desert, nearly getting dead and seeing two men’s legs snapped. He ends up getting drunk and goes to his brother Chuck’s home. He doesn’t go through the normal process of grounding himself or ditching his cell phone. Seeing how Chuck is mentally ill, that doesn’t sit well and he tosses the phone out in the yard. The next morning Chuck is wrapped in a space blanket which upsets Jimmy. I can see why. Chuck is only going to get worse. Folks don’t usually just get better on their own when they have these phobias. 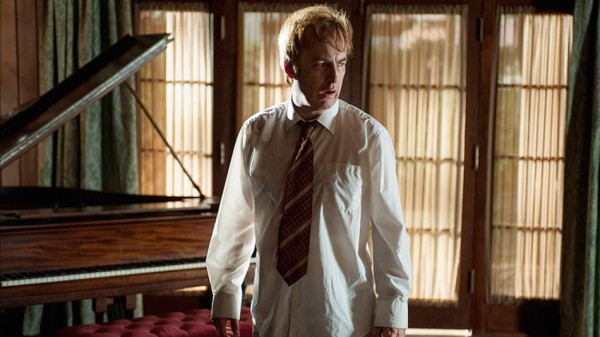 Since Jimmy’s last attempt at a money grab ended up costing him money with medical bills to fix snapped legs, he begs for more public defender work. Hustling hard in the courtroom defending all kinds of weirdos may suck, but the man is desperate for cash. The more cases he litigates, the better he will get though. That means he will be closer to the silver tongued Saul. His “Showtime” antics in the mens’ room give a nod to him becoming a different person just before strolling into court. He is a long way from having his head above water though and Mike keeps giving him hell at the parking gate.

The show wraps up with Tuco’s buddy from the desert, Nacho Varga, paying a visit to Jimmy’s office slash closet at the nail salon. Mr. Varga wants to rip off the county treasurer who stole that million plus. The criminal makes great point about stealing stolen money. Thieves can’t report theft of their ill gotten cash. Varga also reminds Jimmy that he played a role in convincing Tuco to let the lawyer live and he tells him that no one will get hurt. That may be his intention, but we’ve seen how these non violent criminal plans play out. McGill is offered 100K to help Varga out just a little, but he turns it down for now. Clearly the slick lawyer needs that money so I see this as the first big con that Jimmy gets involved in. Hopefully it doesn’t go to far off the tracks with the lovely embezzling couple being killed in a cartel type execution. Or hopefully it does. Either will be compelling.

I give AMC a lot of credit for the way the show has been premiered. They went on right after ‘The Walking Dead‘ on the first night and to make sure no one lost interest, they ran episode two the very next night. They also made the show available on the website with no logging in at all. There are a ton of options on TV, so if new shows are to have a chance, they have to make it easy as possible to actually get on board.