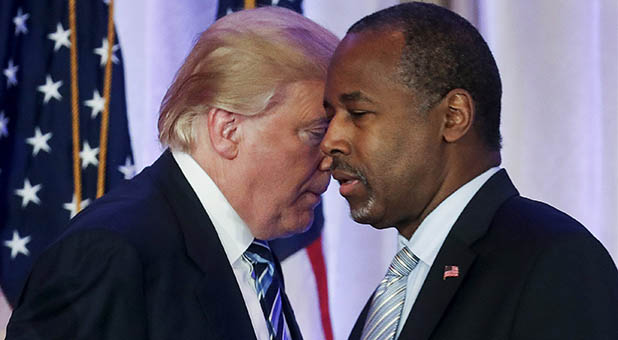 Can we talk about Ben Carson for a minute? I call him “The Great Opportunist.” After recently aligning himself with the modern day Hitler, there is nothing this man will not do to sit at the cool kids table.

We all knew he was not going to get the Republication nomination. In fact, I would bet that his campaign was merely a bid to be a part of Trump’s fuck boy crew from the get go. When considering everything from that perspective, it is scary how strategic Donald Trump and his minions truly are.

My main question for Ben Carson is this: At what point do you become so enamored with fame that you sell your soul to the devil? If he believed in “making America great” there is no way in hell he would have endorsed Trump. Which leads to the only logical reason for giving his support to that man- a position in Trump’s administration.

The thing is, we don’t have to speculate or assume that he was offered a place in Trump’s kingdom because Carson admitted that he was. Yes, Carson endorsed the most openly hateful man that has run for the presidency in the last 30 years. But this isn’t the kicker.

“I didn’t see a path for Kasich, who I like, or for Rubio, who I like. As far as Cruz is concerned, I don’t think he’s gonna be able to draw independents and Democrats unless he has some kind of miraculous change… Is there another scenario that I would have preferred? Yes. But that scenario isn’t available.”

What scenario wasn’t available you ask? Carson goes on to say that he would have liked to endorse another candidate, but none of them have Trump’s showmanship. While he tries to put his reasoning in fluffy terms, he pretty much says that Trump has the popularity and visibility, so he threw his support to the reality TV star.

This is what American politics have come down to, going with the one most likely to get the nomination based on the need to feel included and not on the need for strong leadership. That is opportunism at it’s finest. It didn’t take the good doctor long to learn how to be a politician. He even says that all the nasty things Trump said about him were just politics. Ben fucking Carson! He called you a child molester my man. How can you get past that? People of America, can you not see that Trump’s people have been coaching this guy?

Now, if his endorsement and subsequent proclamation that Donald Trump wants to serve the people of America, isn’t enough proof of Carson’s instability, then maybe this will. The Daily Beast recently proved that Trump plagiarized Ben Carson in an op-ed piece published by Guam’s Pacific Daily News. And Carson is okay with it. I mean, plagiarized word for word and he said, “It does not bother me at all” according to Yahoo News. Here is an excerpt from both documents.

From Carson’s Feb. 26 column, “Restoring equality and fairness to our fellow Americans in the territories and commonwealths”:

“I am saddened to hear that every day, more and more of you in the territories and commonwealths are leaving your families and homes because the healthcare and educational systems are inadequate.”

“I am saddened to hear that, every day, more and more citizens in the territories and commonwealths are leaving their families and homes because the health care and educational systems are inadequate.”

I imagine that had it been another candidate or a Democrat who took his words and made them their own he would have something to say about it.

What more proof do we need that Trump’s presidency is a shame? Carson is bending over backwards to be a part of his race to the White House, and it is shameful. Especially since he told NewsMax TV that the agitators/protesters at Trump’s rallies are the ones to blame for the violence that happens. The level of coonery with this man in unprecedented.

Ben Carson the Presidential hopeful unraveled quickly, which only lends to the notion that he was never in the race to make a difference or even win. It was all a ploy for this moment and many more moments to come. This man will tell you the earth is the center of the universe if that meant getting ahead.

Let us take a lesson from the foolery we are seeing with this presidential election. Things are out of control. As I’ve said before, we have the power to prevent men like Trump and cabinet members like Carson from ruining this country. Men like this serve no other purpose than to increase their visibility, further their personal agendas and elevate their lot in life by stepping on the rest of us.