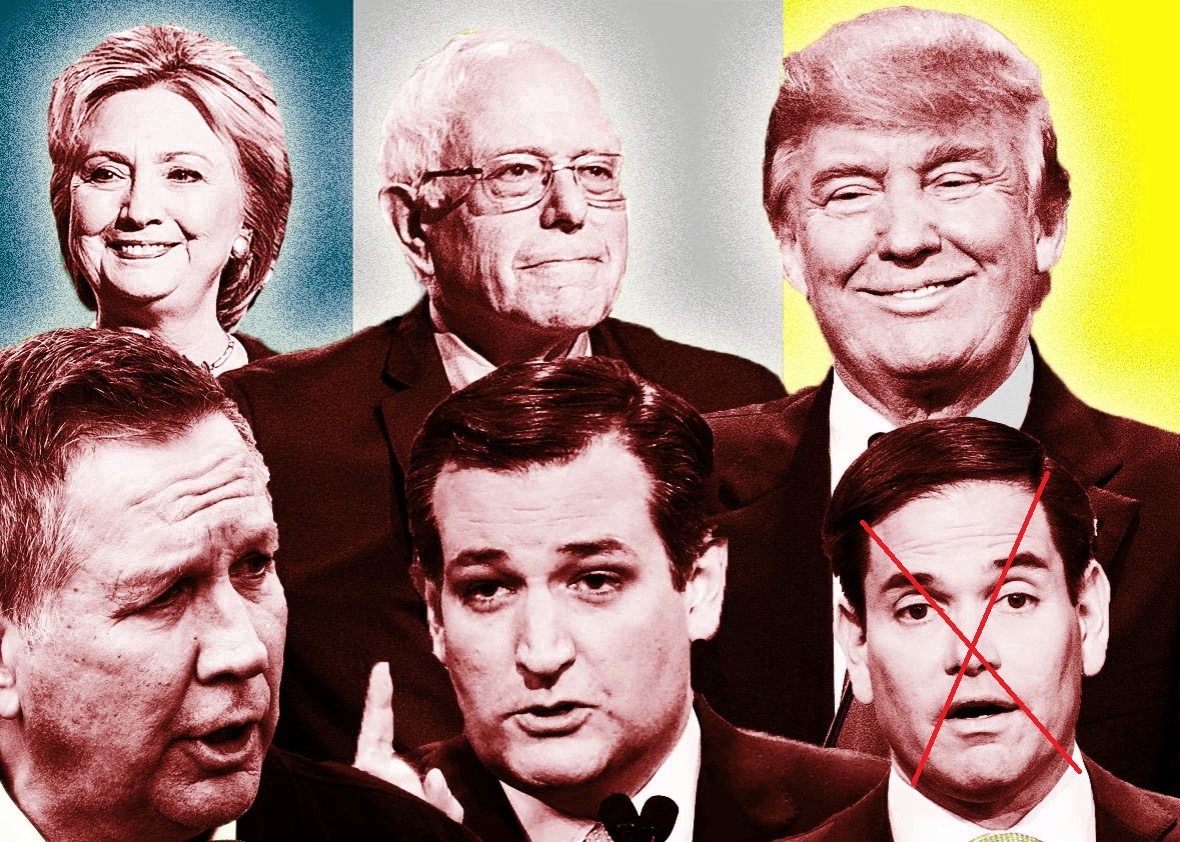 We’ve now gone beyond Super Tuesday 3 and there’ll be another Town Hall talk for the remaining candidates running in the 2016 Presidential Election, and for some, election fatigue has already set in. Especially for people betting on the outcome. It’s easily one of the biggest spectacles on a global scale, but after last Tuesday, things are pretty much laid out for November…no matter what the Republican party continues saying.

After the March 15 primary results rolled in, Fox News declared that “Donald Trump revved his already surging momentum” in the GOP race. On the Democratic side, Politico noted former Secretary of State Hillary Clinton’s “big win in Ohio Tuesday night likely catapulted her into history as the first female nominee of a major party.” The Washington Post called Clinton’s night “stunning.”

By the way the media told it, you’d think it was the most consequential night of the campaign. But the prediction markets — which track thousands of bets to determine each candidate’s chances — barely budged. While the networks’ jaws dropped, the bettors merely yawned.

Our friends at the political data site Inside Gov turned to Predict Wise to visualize how the prediction markets reacted to the latest round of primaries. PredictWise combines several betting markets and a bit of polling to track each candidate’s chances over time. We’ll start with the GOP.

The press might say the GOP primaries remain frenetic and unpredictable, but the markets believe the race has held fairly steady since late February. Donald Trump continues to lead, with a good-but-not-great chance of capturing a majority of delegates. Should he fail to do so, both Texas Sen. Ted Cruz and Kasich have a small chance of capturing the nomination at a contested convention.

Bettors likely see this as the consistent, underwhelming reality of the race. As a result, they peg Trump’s chances between 75 and 80 percent, while they see Cruz and Kasich’s odds at about 10 percent each. In the eyes of political predictors, the March 15 primaries did little to change that calculus.

On the Democratic side, the difference between media drama and market pragmatism is even more stark. The media might point to Vermont Sen. Bernie Sanders’ 32-point New Hampshire win or “stunning Michigan upset” as a sign the Democratic race is a real battle. But in the markets? It’s a Clinton victory lap.

The markets have seen Clinton as the heavy favorite to win the Democratic nomination for months, and they’ve only gotten more confident in recent weeks. The delegate math for Sanders simply doesn’t work. He’d have to win every remaining state by about 16 points to squeak past the former secretary of state, and for most of those states, he’s already behind in the polls.

So why do the markets give Sanders even a 5 percent chance of winning? It’s possible bettors give a big, new Clinton scandal about a one in 20 chance — likely the only thing that would derail the Democratic front-runner.

The prediction markets tend to look steadier than the press because bettors are incentivized to be right, not to earn ratings. For an online publisher, a clicky story drives traffic, but in the world of political betting, a crazy prediction is simply a waste of money.

That said, the markets aren’t flawless. While bettors have remained mostly consistent, they were briefly taken in by so-called Marco-mentum, not once, but twice. Following Florida Sen. Marco Rubio’s now famous “third-place win” in Iowa, just about everyone — from the media to the markets to the polls — assumed Rubio had stolen Trump’s front-runner mantle.

Note, however, how quickly the markets found their footing. The day after the Feb. 9 New Hampshire primary, the markets reinstated Trump as the modest favorite (44 percent) and downgraded Rubio to his lowest odds yet for the year (23 percent). Meanwhile, the media continued to focus on Rubio’s robotic debate performance, unsure whether the Florida senator’s poor results were merely a one-day blip. It often takes the media weeks to get over a sensational story. The prediction markets — if they even fall victim to the hype in the first place — tend to move on in just one or two days.

The markets gave Rubio one last look after his second-place finish in South Carolina on Feb. 20, but have been down on him ever since, in a slow-but-steady trudge toward his eventual exit from the race.

Although the market odds for the GOP and Democratic nominations have held steady for the last several weeks, the odds have been moving significantly in one key area: the general election. In late February, the markets gave Democrats a modest, 60-40 edge. Bettors now see Democrats as more than a 2-to-1 favorite come November, with Republican chances falling around 30 percent.

It’s likely that Rubio’s rapid fall has contributed to this change. Rubio has often fared well in hypothetical general election match-ups against Clinton while Trump performs noticeably worse. The closer the GOP gets to nominating its current front-runner, the more favorably the markets will view a Clinton presidency.

For now, bettors probably see Kasich as the best shot to beat the Democrats in November, should he somehow secure the nomination. But if you believe the prediction markets, don’t bet on it.