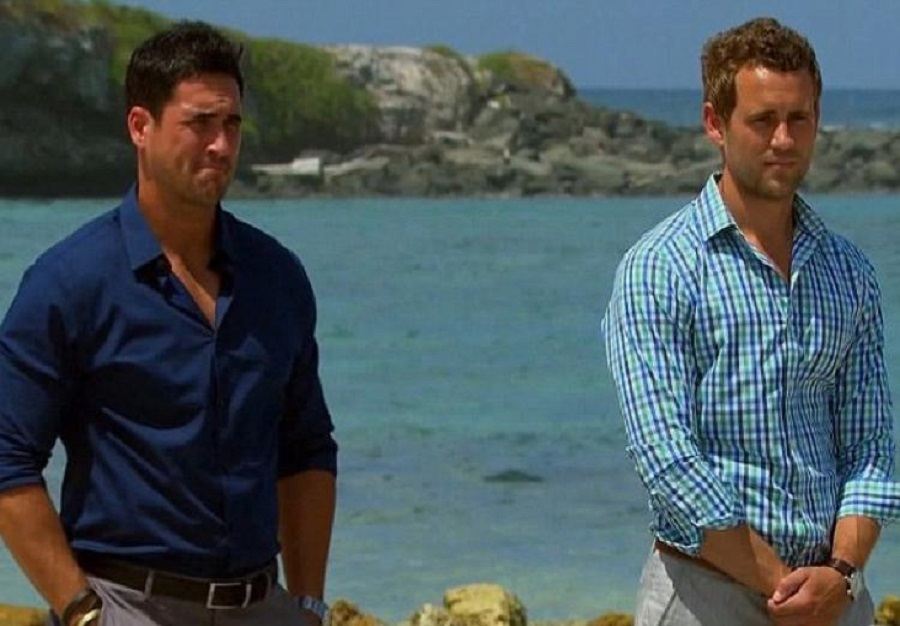 In the second installment of this week’s Bachelor in Paradise, one of the bachelors finds out that the woman he has his eyes on doesn’t feel the same way. In addition, the twins Haley and Emily have some fun by playing a prank on a new cast member.

The episode opens up with a kissing fest between Amanda and Josh. Nick tells Daniel that he “doesn’t care” about Josh stealing Amanda away, however, his continuous spying on them seems to say otherwise. In confessional Daniel explains that while Nick is “playing it cool” right now, there is likely going to be some confrontation and drama in the near future (which he is more than happy to watch).

Not long into the episode, Christian from Jojo’s season shows up. All of the girls right away start gushing about how “cute” he is. Christian rallies the men together and gets the low-down on what’s been happening in paradise before asking one of the girls out with his date card.  Josh tells him straight up that he won’t get far with Amanda, seeing as he has established a strong connection with her already. Daniel also mentions his fling with Sarah and in confessional he confidently states that Sarah would not go on a date with Christian. At this point, Daniel is certain that he has Sarah wrapped around his finger and intrigued by his maple syrup-loving, Canadian allure. Contrary to Daniel’s prediction, Christian winds up pulling Sarah aside, and she happily agrees to join him on a date.

The next day, Carly is seen having a private chat with some of the girls. She is heard complaining about her date with Evan, going as far as to call it a “nightmare.” Meanwhile, Evan is busy gushing to Vinny about the “butterflies” he felt when he was on the date with Carly. Later on, Carly pulls Evan to the side to “break it off” with him. As politely as possible, she confesses to him, “I would like to be your friend…I’m not romantically interested in dating you…I’m sorry.” Evan admits that it “hurts for sure” and then scurries away to cry in his room.

On their date, Sarah and Christian go zip lining and repelling down a waterfall. Sarah says in confessional that she is having a “really great” time on the date. Her and Christian share a romantic kiss underneath the waterfall (of course).

Back at the main camp, Brandon Andresen from Desiree’s season of The Bachelorette arrives. Brandon admits that he wasn’t very “memorable” when he was on the show, and this is further proven by the fact that host Chris Harrison barely recognizes him. Carly is pretty thrilled to see another contender (who she actually thinks is attractive) step into the mix. Brandon proceeds to scope out the women in an attempt to determine whom to bring with him on his date. It is clear that Carly is praying that he chooses her, but unfortunately, she is let down as he asks out Haley (one of the twins).

Later, Daniel decides to take “matters into [his] own hands” and decorates one of the seaside beds. He then sneaks Sarah away for an impromptu date – which includes chocolate-dipped strawberries and plenty of champagne. Surprisingly, Daniel actually opens up to Sarah and talks about his feelings towards her. He confesses that while she was on the date with Christian, he realized that she is “hands-down the best girl [in paradise].” In response, Sarah tells Daniel that she found herself, on several occasions, wishing that he were with her on the zip-lining/repelling date instead of Christian.

Haley and Brandon head off on a late-night dinner date. In an attempt to see how much Brandon is really paying attention to her, Haley decides to pull a “switch-er-roo” with her twin Emily in the middle of their meal. This comes minutes after Brandon assures her that he can tell the difference between her and Emily. Haley sneaks off to the bathroom and changes clothes with Emily. Unfortunately, Brandon wasn’t able to live up to his word and differentiate Emily from Haley. He wound up going on a romantic walk with Emily -completely oblivious to the fact that is was no longer Haley enjoying the date with him. Sadly enough, Brandon states in confessional that he hasn’t had “this kind of chemistry in a very long time.”

At the very end of the episode, a heartbroken Evan gives himself a pep talk and comes to the conclusion that he does deserve love. Next, he makes a fake date card and puts together an intimate tree house date, which he plans to sneak Amanda off to (despite the fact that she has been making out with Josh for the whole episode). After getting everything set up, Evan walks down to the beach and approaches Amanda, who is lying beside Josh.

You can catch what happens next on Bachelor in Paradise next Monday, August 15 on ABC.

Josh finds out that Evan is spilling secrets about his past to Amanda. Meanwhile, Caila arrives in paradise and shakes things up once again.