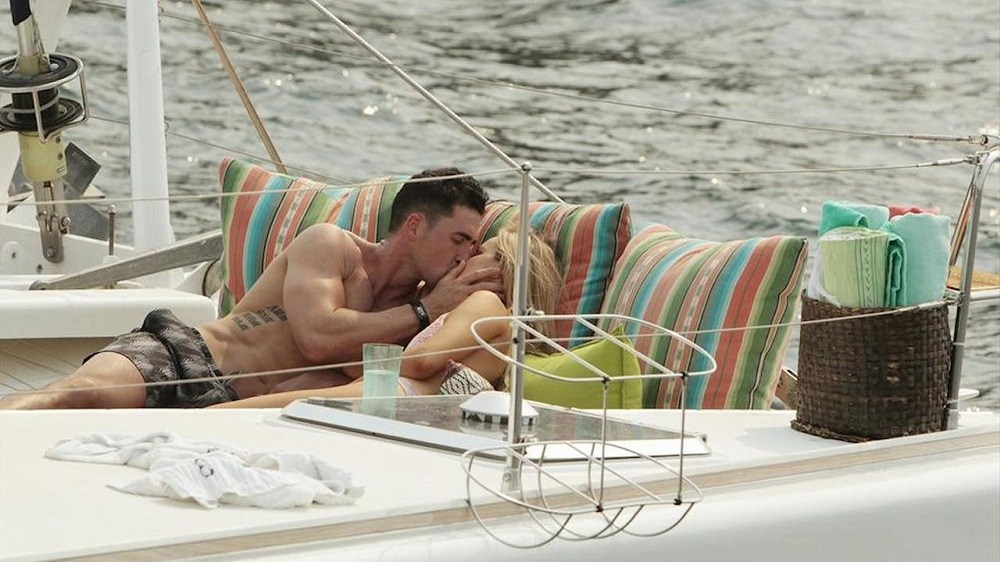 After its Tuesday premiere last week, season 3 of Bachelor in Paradise settled in to its regular Monday (as well as Tuesday) slots. On this week’s first episode, the cast settles in to a Chad-free paradise. In addition, some stronger bonds begin to form between the Bachelor and Bachelorette alumni.

With Chad gone, some of the other girls are stressing over the fact there is one less rose to be handed out. This added pressure gets just that much more intense when Leah Block from Ben Higgins’ season arrives in paradise.

Leah comes in with a one-on-one date card and right away announces that she is hoping to invite Chad on it. The other castaways are quick to inform her that he has been kicked off due to his extremely aggressive and threatening behavior. While she is initially disappointed, she ends up inviting Nick to join her – much to Amanda’s dismay.

Meanwhile, the other castaways are busy pointing out just how big Leah’s lips are all of sudden. Clearly, she visited the plastic surgeon before joining the crew in paradise.

Following the whole Chad debacle, Lace expresses concern about her inability to connect with any of the other guys – specifically Grant. Fortunately, Grant ends up assuring her that there is still potential for something to blossom between them.

On their date, Nick and Leah explore a Mexican market and indulge in some crickets (seriously!) They end up kissing in front of the ocean and a beautiful sunset, however, it is definitely evident that Leah is much more into it than Nick.

After returning back to the main camp, Nick is the next person to get presented a date card. Leah’s face goes utterly blank when Nick asks Amanda to join him on the date. On the other hand, Amanda’s face instantly lights up. 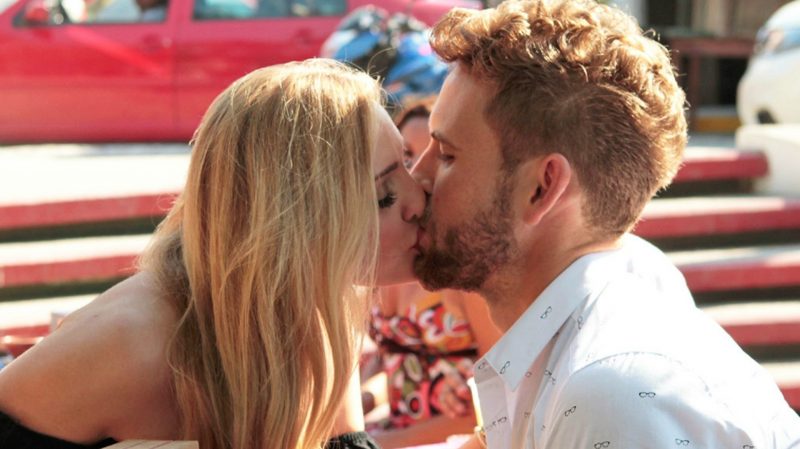 On their date, Amanda and Nick completely connect. Unlike on his date with Leah, Nick actually gets into (relatively) deep conversation with Amanda. By the end of the night, they really end up establishing a solid connection [in front of a romantic beach bonfire]. Simultaneously, Leah is having a full-on sob fest, seeing as Nick didn’t share the same feelings she did towards him.

Some other small romances begin to develop, as Sarah attempts to pry herself between Vinny and Izzy. In addition, Carly and Evan spend some quality together – although she is definitely not head-over-heels for him at this point. Grant and Lace continue to heat up and appear to have taken their relationship to the next level.

Next, the first rose ceremony commences and host Chris Harrison rallies the troops. Grant, of course, gives his rose to Lace. Nick hands his to Amanda; Evan gifts Carly with his rose; Jared surprisingly gives his rose to Emily (which means that her twin Haley gets to stick around), Vinny hands his to Izzy, and lastly, Daniel chooses Sarah to be the recipient of his rose.

Thus, after the first week in paradise, both Leah and Jubilee are sent home. 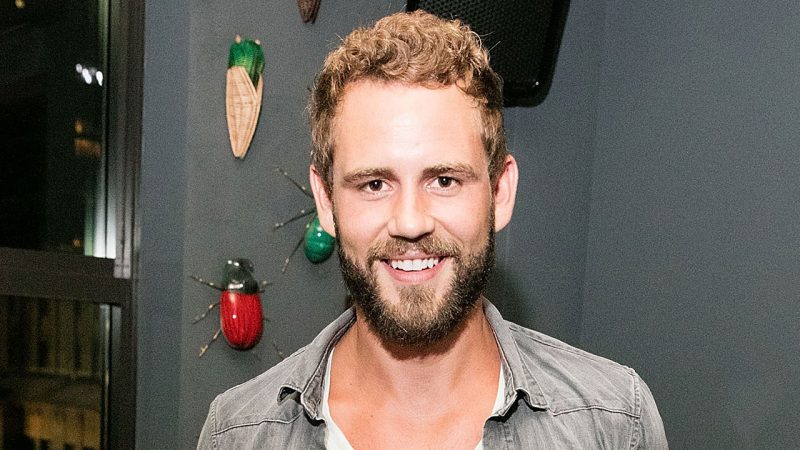 About three-quarters through the episode, paradise is completely shaken up as Josh Murray shows up. If you are a member of Bachelor Nation, you are well aware that Josh Murray was the winner of Andi Dorfmann’s season, beating out fellow paradise-dweller Nick Viall (evidently, Josh and Andi didn’t make it for the long haul). Conveniently, Josh walks in with his date card and asks Amanda to join him – which she graciously accepts.

On their date, Josh and Amanda end up discussing Amanda’s developing connection with Nick. Josh makes it perfectly clear that he is not worried about Nick getting in the way of the potential relationship he hopes to develop with her. Back at camp, Nick is busy sulking while he complains about not wanting to get to know any of the other women currently in paradise [except Amanda].

The next day, Carly is busy trying to avoid Evan as she realizes she felt absolutely no spark when she kissed him the other night. Unfortunately, things do not go as planned, as Evan turns up with his very own date card. Inevitably, he asks Carly to join him, and she half-heartedly accepts. In confessional she admits, “I’ve never wanted to not go on a date more in my life.” They wind up trying to beat a world record: the longest habanero pepper kiss. They proceed to eat the world’s hottest pepper and then kiss for 90 seconds straight. Despite beating the record, Carly runs off to the bathroom and pukes after. Needless to say, Carly’s lack of romantic feelings for Evan didn’t change after their undeniably strange date.

To end the episode, Jared is seen lying on the beach with Emily. Unfortunately, Jared is not very skilled when it comes to flirting, and Emily winds up taking the reigns. Eventually, after a bunch of Emily’s tactics (excessive complimenting, forcing physical contact, etc.) Jared finally plants one on her.

Josh returns to the paradise main camp with Amanda, who seems to have completely jumped from Team Nick to Team Josh. Nick confronts Josh about swooping Amanda right from under him. However, Josh makes it very clear that he is more than ready to battle it out. In fact, the last few minutes of the episode are dedicated to Nick lurking while Josh and Amanda are seen passionately kissing one another.

You can catch more Bachelor in Paradise on Tuesday, August 9th on ABC. 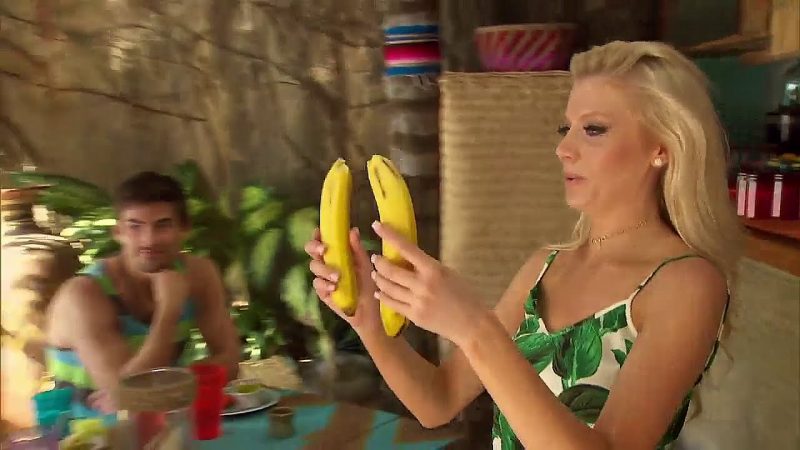 Up Next on Bachelor in Paradise:

The twins, Emily and Haley, play a prank on a new arrival to paradise. Meanwhile, a bachelor finds out that the girl he likes doesn’t feel the same way.