The NFL protests continue to be a storyline as Antonio Cromartie believes he was cut for going against team owner Jim Irsay’s wishes. It was a matter of time before a player’s freedoms collided with the freedom of his boss to hire and fire anyone he chooses.

Cromartie has kneeled during the National Anthem the past two games. And after being released by the Colts, his wife had this to say on Instagram.

“You are nothing more than an entertainer. Just shut up and do what we say… One things for sure I know my husband was told Not to take a Knee and he went with his heart, and he took one. And that cost him his Job.. and clearly, this Statement backs that up… Just Paid to put on a show.”

While the Colts’ head coach said that releasing the 32-year-old Cromartie was a football decision, going against the orders of the team owner didn’t help matters. Personally, I think protests should happen anywhere that is public property. It’s not much of a protest if protestors have to make sure the protest is OK with everyone who might see it unfold. 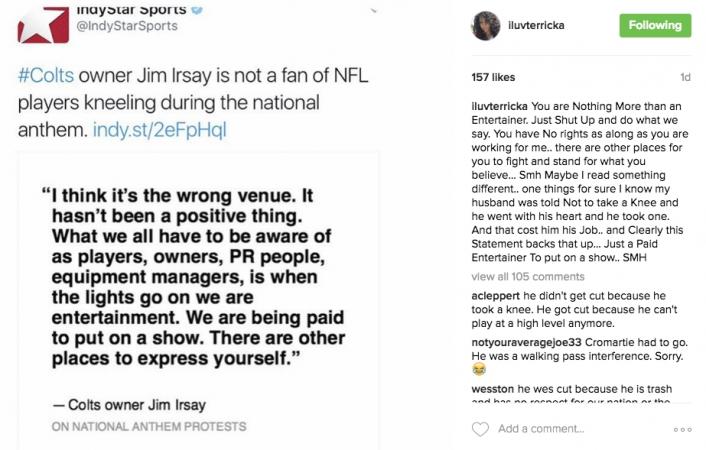 At the same time,  NFL players are just workers. They have bosses and can be fired at any time. Irsay has said he believes the protests have hurt the NFL product and that TV ratings are down because of all the talk being about social issues instead of actual games.

“What we all have to be aware of as players, owners, PR people, equipment managers, is when the lights go on we are entertainment. We are being paid to put on a show. There are other places to express yourself,” Irsay told USA Today Sports. 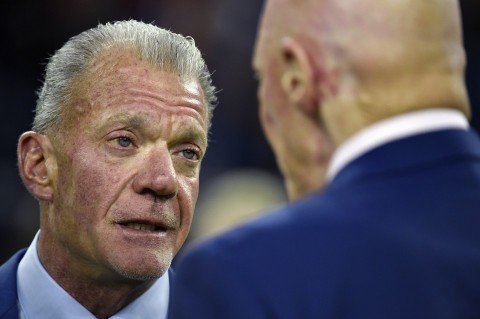 The owner of a football team has just as much right to fire a worker as one of the workers has to take a knee during the National Anthem. If Colts fans are offended by the firing of the player, then they have the freedom to show their displeasure in any peaceful way they see fit.

It would be my bet though that most Colts fans would applaud the move by their usually unpopular owner. Despite what the mainstream media shows on the nightly news, most people are sick of these protests. Rational people know there are a few idiot cops who have screwed up royally in dealing with black people during confrontations. These same rational people also know that the vast majority of cops are decent people.

If you don’t believe there is more support for police officers than there is hate, just ask a cop how many meals he has bought since these NFL protests started. I’ve been told by a couple of LEOs that 80 percent of their meals have been paid for by regular citizens to show support for officers.

These supporters may not be in the streets with picket signs, but they are making their opinions known in other ways.

It’s no secret that Antonio Cromartie was on the backside of his NFL career. Not being very good at his job anymore was, in fact, the main reason he was cut. If Andrew Luck mooned the fans during the National Anthem, he would have no problem entering the Colts facility on Monday morning. Same goes for T.Y. Hilton.

Guys that are valuable can make waves. Guys that have less to offer their teams need to watch their step if they want to keep that high paying job.

As for Cromartie’s statements since being released, the guy sounds completely rational. He makes good points about hateful messages being sent his way by people who don’t even notice how our veterans are treated once they return from war. 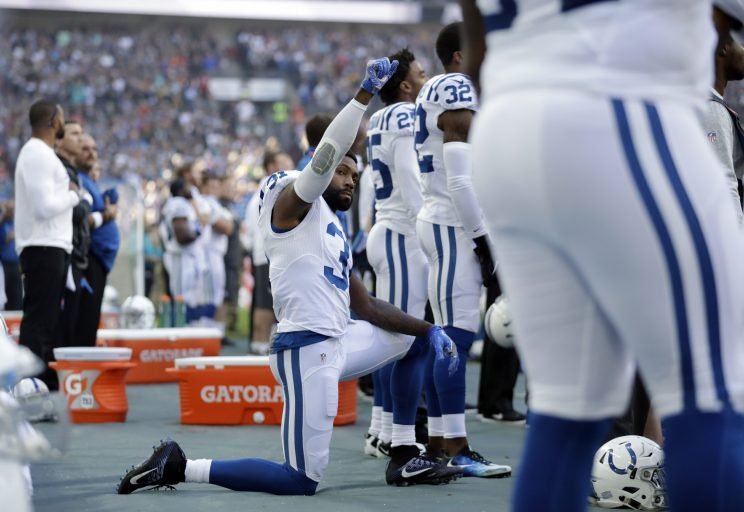 In the end, though, he is just a worker, an entertainer like his wife stated. His contract is not guaranteed. And even if you don’t agree with his protest, he showed no fear of possibly losing his job.

Players who continue to protest are putting their jobs on the line if they are not superstars. The freedom of the team owners to operate their business how they see fit is just as important as the freedom of the players to protest.

America’s freedom of speech laws protect citizens from government punishment. No protection is guaranteed in the private sector. The government should not tell anyone how to peacefully protest. Nor should the government force any business owner to keep someone employed who has rocked the boat.