Home All News Movie News From Anti-Diversity to Anti-Semitism, Marvel Comics Has its Hands Full 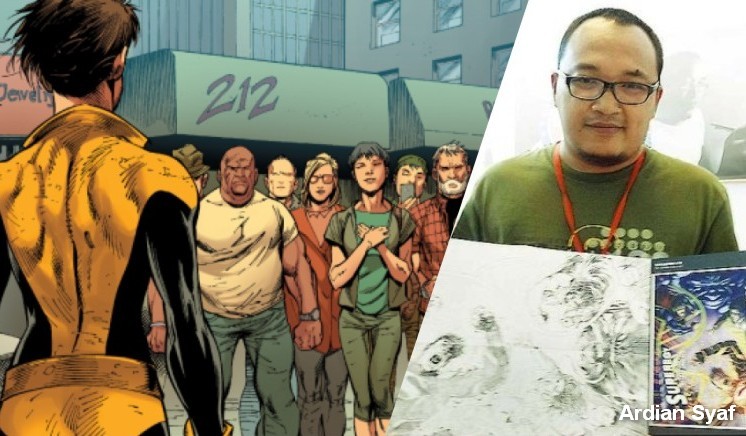 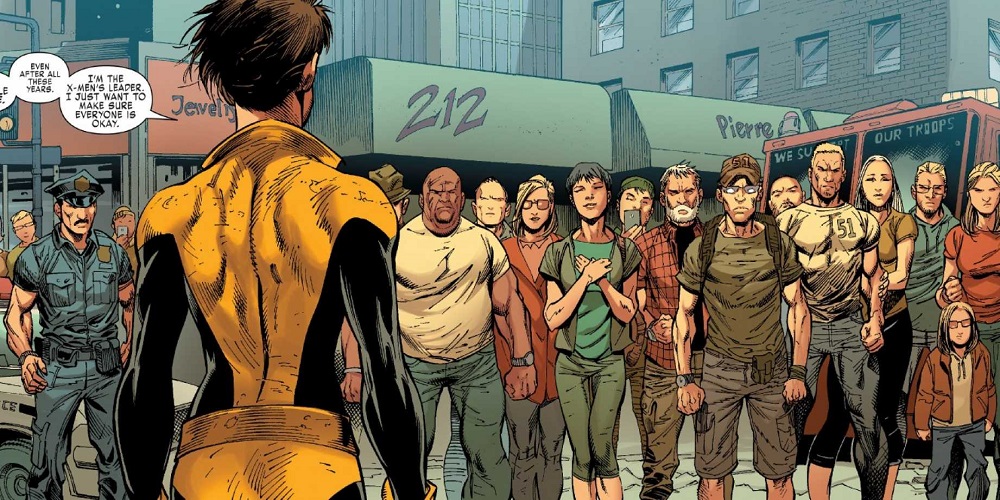 We love Marvel comics. Most of the time they churn out some amazing comics, amazing stories and great characters. Most of the time—but in this long running business, especially one related to print media, controversies can arise. Just last week, Marvel got such flak when the company announced, or rather its vice president of print media and marketing David Gabriel said that customers no longer want diversity in their comics. Well, he’s partly correct after listening to the percentage that didn’t want too much diversity but not accounting for those who actually like the direction the company has been going. The company again is making headlines due to anti-Judeo-Christian messages sneaked into the art of the newly-released X-Men Gold comic.

‘What now?’ is probably a question going through the halls of the Marvel bullpen. First, it was HYDRA Captain America, then it was HYDRA Magneto, and recently it was too much diversity killing their sales. Now, Marvel Comics is in the middle of an inadvertent controversy involving anti-Semitism in a comic book that has always preached tolerance for people who are different—the X-Men. This was due to Indonesian comic artist Ardian Syaf, responsible with penciling X-Men Gold #1. Syaf is guilty of sneaking in anti-Semitic messages in several frames of the X-Men comic. He could have gotten away with these messages and might have done more if not for the watchful eyes of fellow Indonesian Muslim comic book readers. Syaf is a talented artist with credits including DCs Batgirl and Superman/Batman. These messages include the numbers 551 drawn on Colossus’ shirt. 551 refers to the Quran verse QS 5:51 which reads:

“O you who have believed, do not take the Jews and the Christians as allies. They are [in fact] allies of one another. And whoever is an ally to them among you – then indeed, he is [one] of them. Indeed, Allah guides not the wrongdoing people.”

(translation from Quran.com. May not be fully accurate)

However it’s interpreted, it does not sound pleasant for those concerned. This verse is relevant to an ongoing issue in Indonesia involving Jakarta’s Christian Chinese governor Basuki Tjahaja Purnama, also known as Ahok, who like David Gabriel committed a slip of the tongue and is accused of insulting the Quran September last year. A protest rally was held against Ahok last December 2 which brings us to another hidden message drawn by Syaf. He drew the numbers 212 in a frame as a political message against Ahok. An Indonesian reader quickly put two and two together and expressed his distaste that a comic book such as the X-Men was used as a vehicle for a personal political and religious statement. 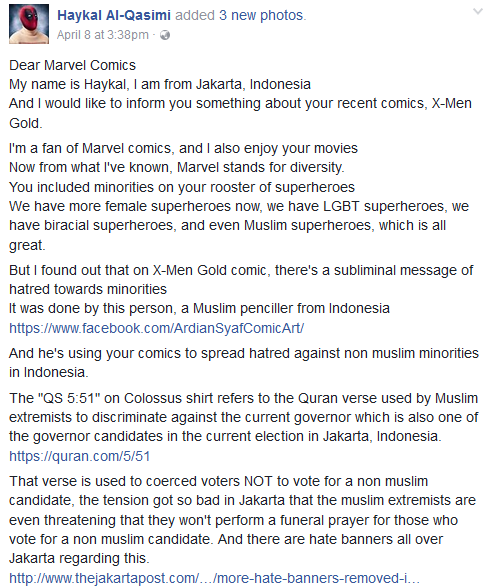 The frame in question was anti-Semitic since Kitty Pryde is Jewish and was drawn with her back to the reader with the word Jew drawn on the side of her head disguised as a Jewelry Store sign.

Marvel made a statement that it does not share Syaf’s views and that Syaf will face repercussions. More recently, the company stated has terminated its contract with Syaf.

“The mentioned artwork in X-Men Gold #1 was inserted without knowledge behind its reported meanings. These implied references do not reflect the views of the writer, editors or anyone else at Marvel and are in direct opposition of the inclusiveness of Marvel Comics and what the X-Men have stood for since their creation. This artwork will be removed from subsequent printings, digital versions, and trade paperbacks and disciplinary action is being taken.”

“Marvel has terminated Ardian Syaf’s contract effective immediately. ‘X-Men Gold’ #2 and #3 featuring his work have already been sent to the printer and will continue to ship bi-weekly. Issues #4, #5, and #6 will be drawn by R. B. Silva, and issues #7, #8, and #9 will be drawn by Ken Lashley. A permanent replacement artist will be assigned to ‘X-Men Gold’ in the coming weeks.” 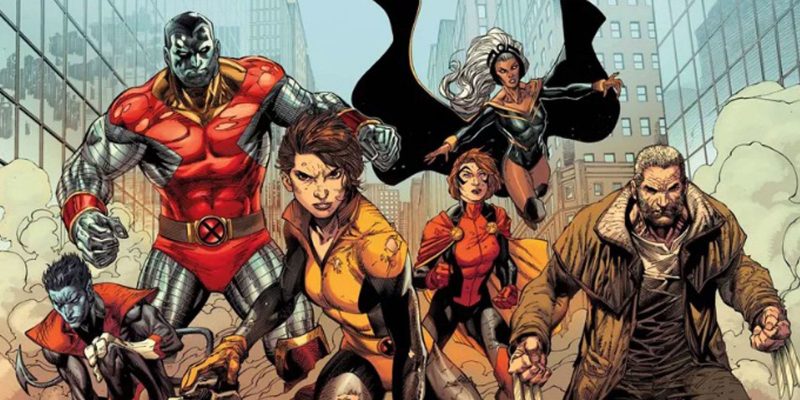 Syaf himself has released a statement apologizing for what he did.

“My career is over now… It’s the consequence what I did, and I take it. Please no more mockery, debate, no more hate. I hope all in peace. In this last chance, I want to tell you the true meaning of the numbers, 212 and QS 5:51. It is number of JUSTICE. It is number of LOVE. My love to Holy Qur’an … my love to the last prophet, the Messenger … my love to ALLAH, The One God… My apologize [sic] for all the noise. Good bye, May God bless you all. I love all of you.”

It’s not new for comic artists to touch on sensitive topics and even include Easter eggs within their pages for those clever enough to find them. Syaf, however, didn’t count on how these things can virally spread through social media when posted by someone who could relate but do not agree with his views. Unlike the other recent controversies Marvel Comics faced, the editorial team was actually oblivious to this one. This new controversy was completely unintentional but negative nonetheless. It’s a blow not just for the company but for the X-Men comics franchise which is currently trying to reinvigorate itself after a long slump. Fortunately for them, many fans were sympathetic.

As Marvel has stated, Syaf’s art will continue to be featured for two more issues and there might be more Easter eggs to be found there. This will serve as a lesson to Marvel to perhaps look a little bit closer on the art of their comics which is also blow unto itself. This takes away from artistic freedom and self-expression of artists who might want to put in some less harmful messages in depending on their mood. Plus, this is the X-Men we’re talking about. A title that describes the effects of racism and intolerance. It will definitely be a big task for editors to police against personal political subterfuge yet remain flexible to bring the title’s message home to readers. But then again that’s what editors are for. Good luck Marvel.