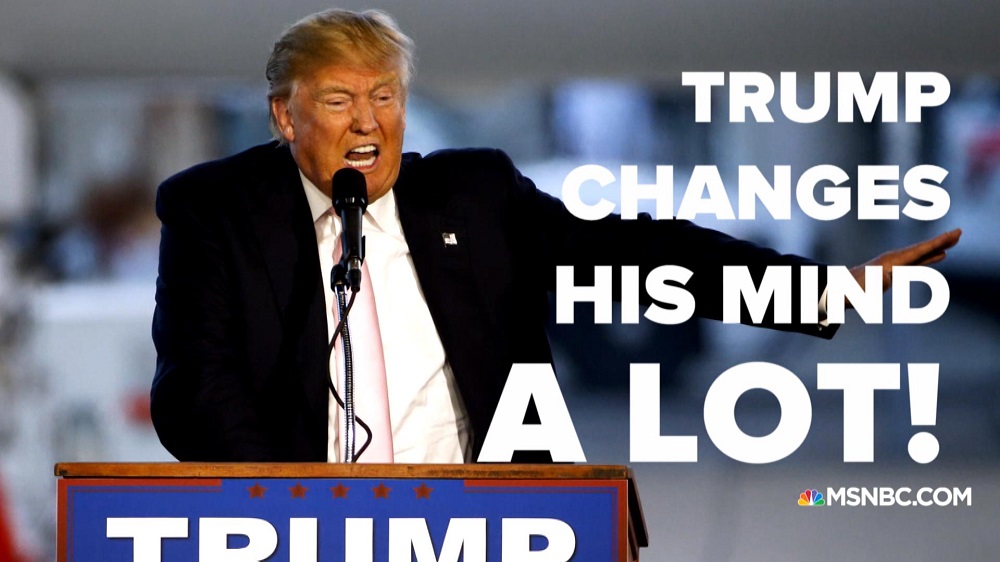 One thing you can say about Donald Trump is that by the time you’ve fact checked his latest policy idea, he’s already moved on to another one that stands in stark contrast to the original one. It makes it harder for him to get caught holding the bag when something goes wrong as he can just say that he held both views at some point and was moved by either pictures, “babies,” or a whisper in his ear from daughter Ivanka.

President Donald Trump is abruptly reversing himself on key issues. And for all his usual bluster, he’s startlingly candid about the reason: He’s just now really learning about some of them.

“After listening for 10 minutes, I realized it’s not so easy,” the president said after a discussion with Chinese President Xi Jinping that included his hopes that China’s pressure could steer North Korea away from its nuclear efforts.

“I felt pretty strongly that they had a tremendous power” over North Korea, he said in an interview with The Wall Street Journal. “But it’s not what you would think.”

That’s just one of several recent comments offering insight into what looks like a moderate makeover for an immoderate president. As he approaches 100 days in office Trump appears to be increasingly embracing what he describes as his “flexibility” – acknowledging he may not have thought deeply about some of the issues he shouted about throughout his political campaign.

Over the past 48 hours, the outsider politician who pledged to upend Washington has:

– Abandoned his vow to label China a currency manipulator.

– Rethought his hands-off assessment of the Syrian conflict – and ordered a missile attack.

– Turned his warm approach toward Vladimir Putin decidedly chilly and declared U.S.-Russia relations “may be at an all-time low.”

– Decided NATO isn’t actually obsolete, as he had claimed.

– Realized the U.S. Export-Import Bank is worth keeping around.

“Instinctively, you would say, ‘Isn’t that a ridiculous thing,'” he said of the bank he once panned as “featherbedding” and pledged to eliminate. He now says of the bank, which supports U.S. exports, “Actually, it’s a very good thing. And it actually makes money.”

Allies describe Trump as merely growing in the job, taking what he’s learning and adapting. The White House, however, is struggling to explain some of the changes.

Asked about the growing list of reversals on Wednesday, spokesman Sean Spicer argued that NATO actually is “evolving toward the president’s position,” not the other way around, by focusing more on terrorism and encouraging nations to pay more toward defense.

What about flipflops besides NATO? Spicer was asked.

NATO is actually moving toward Trump, he responded again. Next question.

Trump, who seemed to remain in campaign mode for months after the election, appears to be listening to different advisers now. His onetime campaign guru, Steve Bannon, has been somewhat marginalized while moderate voices grow louder.

It may also be that Trump is merely looking for a way to improve his low approval rating, acknowledging his best tactic could be switching to a less dogmatic, more pragmatic approach.

“Candidates are always bombastic on the campaign trail – and Trump especially. But there is some growing into the office and dealing with the real effects of some of the policies,” said Stephen Moore, a conservative economist who helped craft Trump’s economic plans.

On the other hand, he warned, “if he starts just abandoning his promises, then I think it’s going to exact a political toll.”

In many cases, Trump’s campaign talk appeared born from instinct and little else. He was known as a candidate who rarely dug deep, and he employed few policy experts to inform his views. He’s also long boasted of his flexibility, describing his positions as starting points for negotiation – though many of his core ideas, including frustrations over the U.S. trade imbalance, have held steady for years.

Trump, for instance, vowed to label China a currency manipulator,

“They’re not currency manipulators,” he conceded in the Wall Street Journal interview, adding that he was concerned that officially branding them as such could jeopardize his talks with Beijing on confronting North Korea.

Trump’s evolution also reflects changing power dynamics within the White House, including the rise of Gary Cohn, his economics chief and the former president of Goldman Sachs, and other more moderate business leaders. Cohn has been looking for ways to fulfill Trump’s campaign promises in ways that are practical and achievable – as opposed to doing things precisely the way the candidate outlined.

That’s an attractive prospect for a president eager for the wins he promised – after a difficult first few months that saw much of his agenda, including his signature travel ban and high-profile attempt at overhauling health care, blocked by Congress and the courts.

Trump has also been turning to outside business leaders, including many he’s known for years, for guidance. They include billionaire real estate developers Richard LeFrak and Steven Roth, who are informally advising him on infrastructure, and billionaire investor Stephen Schwartzman, the chairman and CEO of the Blackstone Group, who helped organize two major business panels this month to weigh in on possible regulatory and tax changes.

Trump has also won praise for his decision to bomb an air base in Syria, despite his campaign promise to stay out of conflicts in the Middle East. While many in his conservative base were furious about the move, the bombing after a Syrian chemical weapons attack was widely applauded on the cable networks Trump voraciously consumes.

And it changed the subject from the investigations into Russian interference – and possible collaboration with his campaign – in the U.S. election.

Some things don’t change. Bruce LeVell, a Georgia congressional candidate and Trump campaign backer who met with him several times this week, said, “We don’t want his Twitter to go away. That’s his pipeline to supporters, and he still has it.”