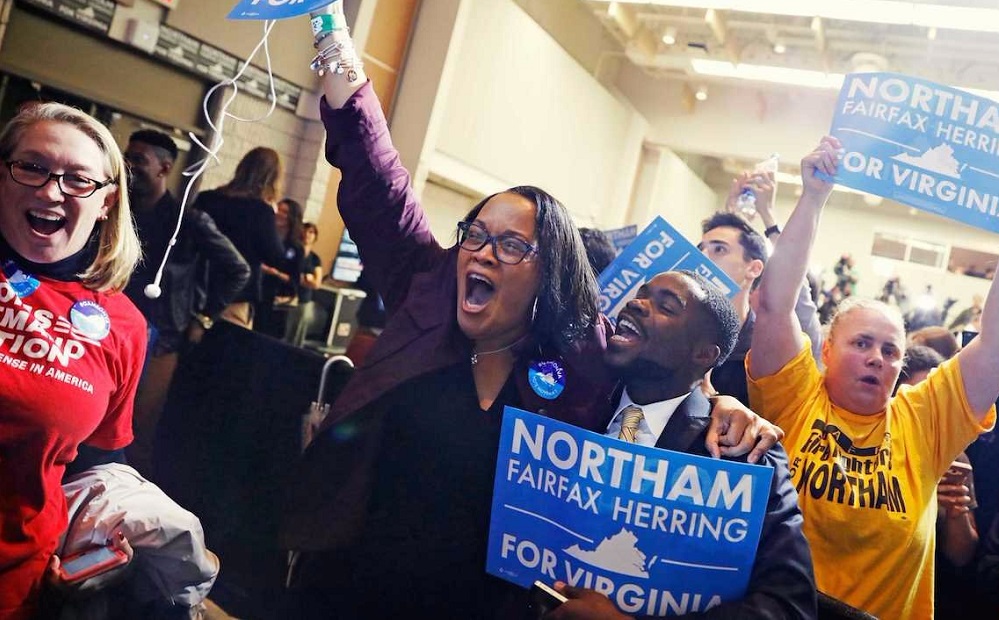 Americans who have been frustrated, angry and feeling helpless got a sign of hope last night when Democrats won elections that sent a strong sign to Washington that Donald Trump‘s actions had worn thin.

Seats that had been held by Republicans were won by Democrats, and in Virginia, a 13-term incumbent who called himself a ‘chief homophobe’ was beaten by Danica Roem, the nation’s first openly transgender elected official. Roem, a former journalist, won by sticking to what her local constituents wanted rather than allowing Robert Marshall to turn her into a wedge issue.

“Virginia has told us to end the divisiveness, that we do not condone hatred and bigotry,” Northam said.

“The days of division are over. We will move forward,” Murphy said in his own victory speech, invoking Trump by name as he looked headed to a double-digit win. Murphy, who earned a fortune at Goldman Sachs before serving as Barack Obama’s ambassador to Germany, delivered his address in the same spot as Christie in his 2013 re-election— after Christie won big over his Democratic rival.

The wins in both states are a morale boost to Democrats who had so far been unable to channel anti-Trump energy into success at the ballot box in a major election this year.

“The people are gonna rise up. They’re not gonna take what he says and this is not fake news,” said Leanna Barnes, a 76-year-old from East Orange, New Jersey, who voted for Murphy and called his victory a message to the president.

Virginia college student Tamia Mallory said she began paying attention to her state’s gubernatorial race when she saw tweets from Trump endorsing Gillespie. That motivated her to examine the race and find out who was running against Gillespie, she said.

“It was kind of an anti-Trump vote,” Mallory said.

Northam, the state’s lieutenant governor, repeatedly sought during long months of divisive campaigning to tie Gillespie to the president. His victory was in large part due to the surge in anti-Trump sentiment since the president took office. Democrats said they had record levels of enthusiasm heading into the race in Virginia, a swing-state and the only Southern state Trump lost last year.

Gillespie, meanwhile, sought to keep Trump at a distance throughout the campaign but tried to rally the president’s supporters with hard-edge attack ads focused on illegal immigration and preserving Confederate statues. The strategy was criticized by Democrats and some Republicans as race baiting, but drew praise from former Trump strategist Steve Bannon and others as a canny approach in a state that voted for Hillary Clinton last year.

In one call, Trump said Gillespie shared his views on immigration and crime and would help “Make America Great Again.” Trump also said Northam would be a “total disaster” for Virginia.

But after Tuesday’s loss, Trump suggested that Gillespie hurt himself by not more closely aligning himself with the president.

“Ed Gillespie worked hard but did not embrace me or what I stand for,” Trump said in a tweet after Northam won. He also pointed out that Republicans have won every special election to the U.S. House since he was elected.

Northam’s victory is a blow to Republicans, who were hoping that Gillespie could provide a possible roadmap for moderate Republicans to follow in next year’s midterm elections. Several Republicans have announced plans to retire next year instead of seeking re-election, and Gillespie loss may prompt more such announcements.

A former White House aide to President George W. Bush and a Washington lobbyist, Gillespie struck a humble tone in his concession speech as he offered support to Northam. Gillespie wiped tears from his eyes while thanking his wife and said the million people who voted for him love Virginia, and so do those who disagree with them.

“And I know they too are rooting for our new governor to succeed because we all love the Commonwealth of Virginia,” Gillespie said.

The mood was subdued at Gillespie’s gathering at a Richmond-area hotel, with supporters not shocked at the outcome but surprised at how poorly Republicans did. Democrats swept all three of Virginia’s statewide races and nearly wiped out Republicans’ overwhelming majority in the Virginia House of Delegates on Tuesday. A handful of races that will decide control of the body remaining too close to call.

Gillespie supporter Elsa Smith said Republicans needed to do a better job of appealing to minorities if they want to win future races.

“We are not taking care of the demographics the way we should,” said Smith, an owner of a Spanish translation business.

“This is a comprehensive victory from the statehouse to the courthouse. Thank you, President Trump,” Connolly said.

The Democratic victories are another sign of Virginia’s shift toward a more liberal electorate. Democrats have won every statewide election since 2009 and now have won four out of the last five gubernatorial contests. Northam, pediatric neurologist, and Army doctor banked heavily during the campaign on his near-perfect political resume and tried to cast himself as the low-key doctor with a strong Southern drawl as the healer to Trump’s divisiveness. 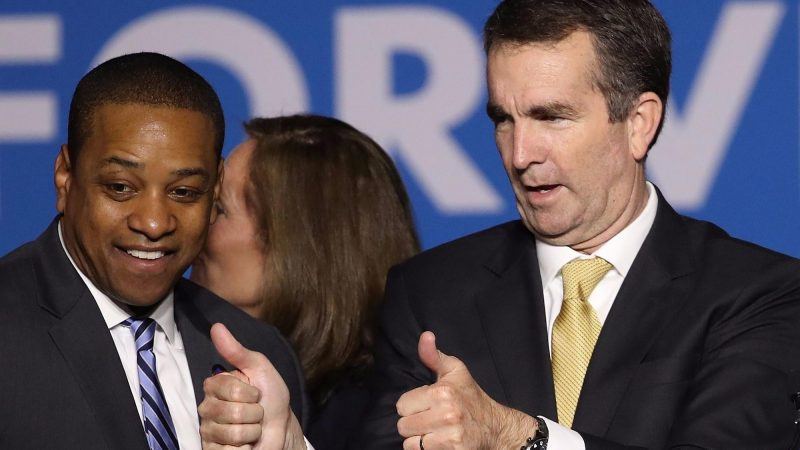 Seizing his party’s first major Trump-era victory, Democrat Ralph Northam beat back a charge from Republican Ed Gillespie in the race for Virginia governor, a bruising election that tested the power of President Donald Trump’s fiery nationalism against the energy of the Trump resistance.

In Virginia, as in several contests across America on Tuesday, the Trump resistance won. And it wasn’t close.

Northam, a pediatric neurologist and Army veteran, defeated longtime Republican operative Gillespie in the hard-fought contest. “I’m here to let you know that the doctor is in,” a smiling Northam told supporters gathered in suburban Washington, D.C., for his victory speech. “As long as I’m governor, I will work hard to make sure we’re inclusive.”

He added, “Virginia has told us to end the divisiveness, that we do not condone hatred and bigotry and to end the politics that have torn this country apart.”

Northam’s victory set off overnight recriminations and finger-pointing among Trump’s hardcore supporters. The pro-Trump website Breitbart News, which had earlier praised Gillespie as a “culture warrior,” derided him as a “Republican swamp thing.” Jerry Falwell Jr., president of Liberty University, said Northern Virginia’s voter-rich liberal suburbs should be annexed by the District of Columbia, “to return the governance of (Virginia) to Virginians.”

The resounding victories marked the GOP’s most significant day of defeat in the young Trump presidency and a rebuke to the president himself as his party eyes a suddenly more threatening midterm election season next year.

The Democratic gubernatorial victories in Virginia and New Jersey prompted congratulations from Obama, who tweeted Wednesday morning, “This is what happens when the people vote.” Obama also congratulated “all the victors in state legislative, county and mayors’ races.”

Perez said the key to his party’s success in Tuesday’s elections was fielding good candidates and thorough organizing efforts.

“Organizing matters,” Perez told MSNBC’s “Morning Joe.” ″This was the most extensive, coordinated ground game in Virginia history, more extensive than any presidential … Terry McAuliffe did a spectacular job four years ago, and they did that much more.”

Trump immediately tried to distance himself from the loss.

“Ed Gillespie worked hard but did not embrace me or what I stand for,” Trump tweeted Tuesday night as he toured Asia, noting that the GOP won a handful of special elections earlier in the year. “With the economy doing record numbers, we will continue to win, even bigger than before!”

Despite the criticism, Gillespie did, in more ways than one, embrace what Trump stands for, even if he didn’t welcome Trump into the state to rally voters on his behalf.

The Republican president played a marginal role in Virginia, largely because Republicans on the ground did not want him there, a state he lost last fall, as his approval ratings hover near record lows. The White House instead dispatched Vice President Mike Pence to help Gillespie, although Trump promised Gillespie would “make America great again” in a recorded phone message that went to voters on the election’s final day.

Gillespie, a former aide to President George W. Bush and GOP presidential nominee Mitt Romney, largely reinvented himself as Election Day neared by adopting many of Trump’s racially-tinged nationalist positions. Gillespie warned of the dangers of the Hispanic street gang, MS-13, and highlighted its motto, “Kill, Rape, Control” in a television ad. The New Jersey native vowed to protect Confederate monuments. And he condemned the national anthem protests by NFL players, the vast majority of them black.

Liberal activists cheered their successes as evidence of the anti-Trump energy on the ground nationwide they have long insisted was real, despite poor results in special elections in deep-red Montana, Georgia and South Carolina.

“This is the first fair fight we’ve had. The special elections that we’ve had so far have been incredibly slanted to the conservative side,” said Ezra Levin, co-founder of the liberal group Indivisible, which had hundreds of volunteers and a handful of paid staff on the ground in Virginia. “There is a wave building. And 2018 is just around the corner.”

“We will not succumb to the politics of fear,” Booker declared.