Home All News Opinion Adele, Beyonce show how women should support each other 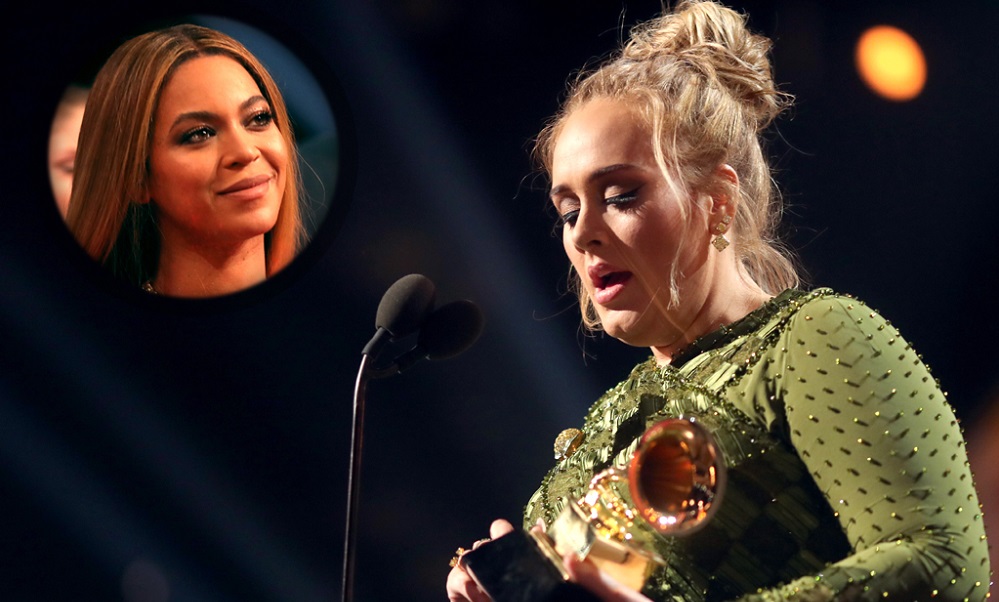 We live in a world that is not nice to women. We saw this fact play out during the 2016 presidential election when Hillary Clinton went head to head with number 45, Donald Trump. He was mean to her, to say the least, and sadly women were too. I cannot tell you how many times I personally heard women express their thoughts on Clinton’s inability to run the country simply because she is a woman. If it is not a man coming down on us, telling us we aren’t good enough, creating horrible standards for us to uphold, orchestrating a patriarchy that still, to this day, makes it incredibly hard for most women to break through that “glass ceiling, it’s our sistren showing no faith in what we do. Women have a bad track record with not being “nice” to other women. That’s why Adele showing her support of Beyoncé’s work at this year’s Grammys is a lesson that every woman who calls herself a feminist should learn. The first thing she said when she accepted the award for Album of the Year was,

“I can’t possibly accept this award … I’m very humbled, and I’m very grateful … but my artist of my life is Beyoncé. And this album to me, the Lemonade album, is just so monumental.”

Adele exhibited great solidarity when she addressed the fact that Beyoncé, whose Lemonade album was one of the highlights of 2016, deserved the recognition of winning Album of the Year. I could get into the many argued reasons why Beyoncé did not win one of the most coveted Grammy categories, but that’s a whole other article. This is about women and the need for us to genuinely support each other. It is also about intersectional feminism. Now, I have heard some women of color say that what she did wasn’t enough, or it was empty or “no thank you, we don’t need your charity,” and those that have that mindset are missing the big picture. Similarly, white women who think that Adele did too much, was out of line or was “riding Beyoncé” also need to take a step back and take a cue from her book of feminism. Intersectionality within the movement is paramount. It starts with gestures like Adele’s because feminism must become more encompassing. As many feel today, the movement, largely led by white women, marginalizes women of color and doesn’t give us an outlet to talk about the connection between racial inequality and gender inequality. In short, it minimizes the fact that the two are related. Nonetheless, when those with the power use it to speak up, it brings us all closer to true equality.

This is how it starts. It happens when those who have the privilege take the reigns of bringing attention to the things that are wrong in the world. Now, Beyoncé is a powerhouse, and that’s not just me speaking from the perspective of a BeyHive fan girl. So, she really doesn’t need anyone to tell her that she is a significant part of pop culture or to take up for her for that matter. I am convinced that Adele knows that. But that didn’t stop her from drawing attention to the fact that the work Beyoncé did, the whole visual aspect of the work that she did (Lemonade was nominated for four Emmys) deserved the recognition. It deserved to win. The critically acclaimed album didn’t just have fans reeling; it garnered the praise of those within the industry as well. Which brings into question what exactly do the voting members of The Recording Academy look for when considering a nominee’s worthiness? Is it the mass appeal of the work or the message, which many white people would argue, in the case of Lemonade, is offensive. And for those who don’t understand the true definition of racism, they’d even say it is racist.

I am in such awe of the respect that Beyoncé and Adele have for each other not just as singers, but also as women. It is a model that all women should employ. Is it about competition? For sure. I mean, if you don’t have anyone to challenge you then how can you really go from level to level? Competition is healthy. However, I have seen it tear too many women down. I have seen it tear too many women apart. Competition for the purposes of pushing one another to be their best selves is important, but the kind that blinds us to the issues is debilitating.

It is going to take more than a superstar like Adele openly admitting that someone like Beyoncé was gypped to change things in an institution like the Grammys. Nonetheless, this is an instance of solidarity that stands as a powerful moment for women and an important one for 2017.