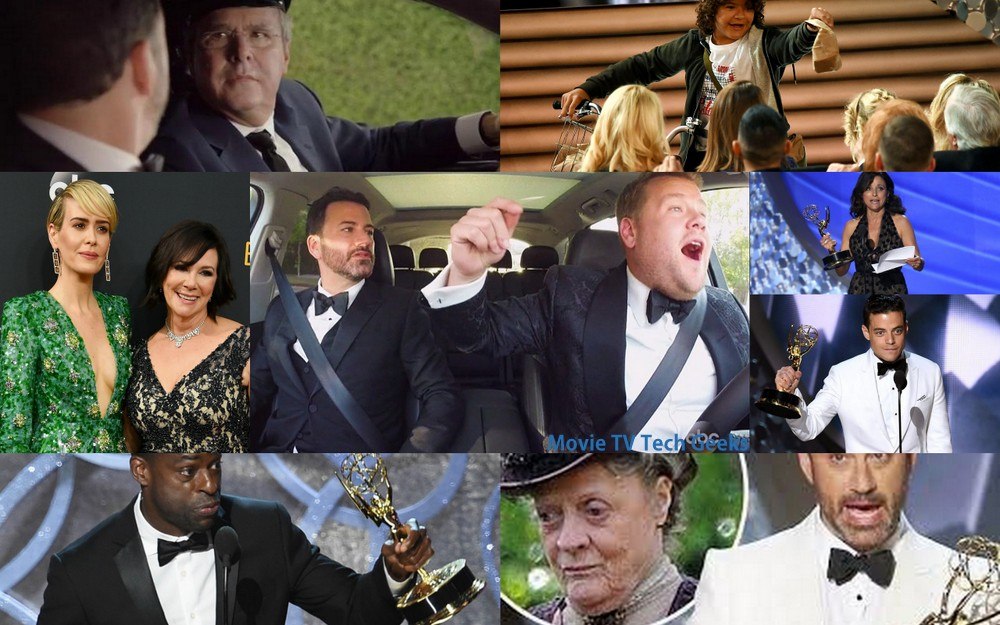 Jimmy Kimmel proves that not all award shows are boring, and he definitely brought his A-game to the 68th Primetime Emmy Awards. The night’s success can’t all be attributed to him as it also relies on winners, speeches and unexpected things that happen. Kimmel made it all look very simple as he nimbly moved through the night obviously enjoying himself.

So, here’s a look at the best moments of the Emmys Sunday night.

Jimmy Kimmel, who first hosted a pedestrian Emmys in 2012, came back and did much better – relaxed, sarcastic without being mean, and quick on his feet. His opening skit included jokes with former GOP presidential candidate Jeb Bush (“Did you know you can make $12 an hour driving for Uber?”) and his opening monologue tweaked Donald Trump by goofing on Mark Burnett, who created “The Apprentice.” He also made fun of the smugness of his audience: “In Hollywood, the only thing we value more than diversity is congratulating ourselves on how diverse we are,” he said. The only truly odd note was a poor attempt at a Bill Cosby joke. But his banter with Matt Damon and his goofing on Maggie Smith made up for it.

The new way to say I love you, Emmy-style, is “you rock my chain,” which is a lyric reference from Jay-Z to, naturally, Beyonce. Actor Sterling K. Brown, who won for his role in “The People v. OJ Simpson: America Crime Story,” started it off by thanking his wife: “I got the hottest chick in the game rocking my chain.” A few awards later, Brown co-star Courtney B. Vance kept the riff going by thanking his wife, Angela Bassett, with obvious adoration: “To the woman that rocks my chain,” he said. But things got odder when British writer Steven Moffat, who won for “Sherlock: The Abominable Bride,” tried to get into the act. To his spouse, he said: “Not only does she rock whatever that was but she actually produces the show.” British-born comedian Jon Oliver couldn’t quite swing it either: “On a personal level I’ve got to thank my wife, the hottest chain – I don’t know either.”

COUNT ON THE DOWAGER COUNTESS

Maggie Smith, who had won three Emmys for playing the snarky and witty Dowager Countess on “Downton Abbey” – and been nominated for six more – won again in absentia for the final season of the PBS series. But Kimmel chastised her at the top of the show for her consistent no-shows with a new law, the Maggie Smith Rule – winners had to be present to accept the award or it would go to the next person on the list. So when Smith won for best-supporting actress, Kimmel pulled a Kanye West and, unscripted and hilariously, returned to the stage to snag the trophy himself. “No, no, no, no, no,” Kimmel said. “We’re not mailing this to her. Maggie, if you want this, it’ll be in the lost and found.”

Sarah Paulson, who played former O.J. Simpson prosecutor Marcia Clark, brought Clark to the Emmys and apologized to her in front of millions for not being kind in the past. “The more I learned about the real Marcia Clark, not the two-dimensional cardboard cutout that I saw on the news, but the complicated, whip-smart, giant-hearted, mother of two who woke up every day, put both feet on the floor, and dedicated herself to righting an unconscionable wrong,” Paulson said, “the more I had to recognize that I, along with the rest of the world, had been superficial and careless in my judgment, and I am glad to be able to stand here today in front of everyone and tell you I’m sorry.”

First-time Emmy winners Tatiana Maslany, who plays multiple characters on “Orphan Black,” and Rami Malek, who plays a hacker on “Mr. Robot,” were gracious and touching in their acceptance speeches. “Please tell me you’re seeing this too,” Malek said when he got onstage. “I play a young man who is, I think, like so many of us, profoundly alienated,” he told the crowd. For her part, Maslany also seemed dazed when her name was called: “I should have had this written down,” she said. Later she had the audience eating out of her hand when she said: “I feel so lucky to be on a show that puts women at the center.”

During one pause in the trophy conveyor belt, Kimmel managed to make a bizarre moment of things rarely combined – peanut-butter-and-jelly sandwiches, the TV show “Stranger Things” and O.J. Simpson. The pause was for the now-required feed-the-guests bit, and the host brought out – on bikes, of course – the young cast from the Netflix sci-fi thriller to deliver what he said were 7,000 sandwiches his mother had made. As if that wasn’t enough, Kimmel then joked about the meal’s “juice” boxes – a reference to Simpson’s football nickname – and wondered if Simpson was watching the show from prison and rooting for “The People v. O.J. Simpson: American Crime Story.” Kimmel even managed to mock people who shy away from gluten and take a jab at the makers of the EpiPen.

Julia Louis-Dreyfus, who won her fifth consecutive trophy as leading actress in a comedy series for “Veep,” revealed that her heart was aching after the death of her father two days before. “I’d like to dedicate this to my father, William Louis-Dreyfus, who passed away on Friday,” she said. “And I’m so glad that he liked ‘Veep’ because his opinion was the one that really mattered. Thank you.” The former “Seinfeld” star later saw her show win its second consecutive comedy series trophy. Showrunner David Mandel honored her in his acceptance speech: “I know it sounds like we work a lot of hours, but this should be an easy job because I get to work with Julie Louis-Dreyfus, who just makes it easy.”