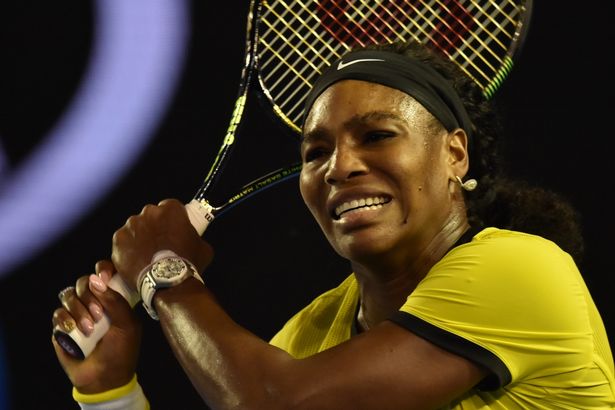 Serena Williams was shocked by Germany’s Angelique Kerber in today’s Australian Open final, losing 6-4, 3-6, 6-4. Williams, the world number one and tournament’s top seed, was chasing her 22nd Grand Slam title. Below is a visualization of the current all-time leaderboard for women’s singles Grand Slam titles, with Williams sitting in third behind Margaret Court and Steffi Graf.

It was a performance for the ages from Kerber, ranked No. 6 in the world.

Williams, winner of three majors last year and eight of the last 14, lost Saturday on the cusp of tying Steffi Graf’s Open era count of 22 Grand Slams for the second straight major. At the U.S. Open, the American was stopped in the semifinals by world No. 43 Roberta Vinci.

“You did so well, let me be the first to congratulate you,” a teary-eyed Williams said on court. “You truly played so well in the moment.”

Kerber also fought off tears as she addressed the crowd, but ones of joy.

“I was with one leg in the plane for Germany,” she said of nearly going out in the first round. “I take my chance to be here in the final and play against Serena. My dream come true tonight, on this night. My whole life I was working so hard and now I can say that I’m a Grand Slam champion… it sounds so crazy.

“I’m really enjoying this moment right now. This is the best two weeks of my life, my career. I had goosebumps when I was playing on the court,” said Kerber, playing in her first major final.

She was undaunted by Williams’ 21-4 title tilt record coming in. The 34-year-old owned a 5-1 head-to-head advantage, as well, including four in a row in straight sets.

Kerber was at her retrieving – and attacking – best on a still and beautiful night atRod Laver Arena, jumping to a 3-1 lead as Williams flooded the court with error-ridden tennis. Williams evened things at 3-all but watched as she made error after error, giving Kerber the break back. Serving for the first set at 5-4, Kerber raced to a 40-love lead and Williams netted a forehand, the crowd bursting into applause for the 40-minute set.

“I think my phone is exploding right now,” Kerber said, confirming she got a congratulatory message from Graf. “I don’t know how many messages I get. It’s like amazing.”

It has been a standout effort of a major for Kerber, who was a Grand Slam semifinalist at the U.S. Open in 2011 and Wimbledon in 2012. A top 10 resident since then, she saved a match point in her first round encounter with Japan’s Misaki Doiand charged through former world No. 1 Victoria Azarenka in the quarterfinals, 6-3, 7-5.

In the second set, Williams charged back at her opponent, breaking for a 3-1 lead as she displayed better footwork and a willingness to stay in the rally. She won the set at 6-3 when the Kerber forehand found the net.

“I think I had, of course, less pressure than her,” Kerber told reporters. “I had nothing to lose, but still I had to lose the match. I knew that I must play the best tennis against her tonight. I was going out there to try to show really that I can play, that I can beat her.”

Kerber won the opening game of the deciding set, then earned a break point against Williams with a scintillating forehand passing shot down the line, a 14-stroke rally that sent the crowd to its feet. She’d break on the next point. The match reached its dramatic peak as Williams broke back, but couldn’t hold serve in a 16-point, back-and-forth sixth game. Kerber would break on her fifth chance in the game, when a Williams forehand went long.

Kerber couldn’t serve out the match at 5-3, then blew a love-30 lead on Williams serve, the American earning a game point.  When it looked as though Williams would even things at 5-all, Kerber earned a match point two balls later and clinched it with a Williams volley long, falling on her back in celebration after 1 hour, 58 minutes.

“I was going out there and not thinking too much that it’s a Grand Slam final,” Kerber told ESPN of her approach to the final. “I was trying really to enjoy the atmosphere. I was enjoying the whole two hours on court. I was going out there, trying, OK I can beat her; I beat her once. And just believe in myseIf. If you’re just hoping, you can’t win against her. That was my game plan: serving good, moving good and just going for it. It works.”

Williams served far below her best, putting only 53 percent of first serves in and hitting six double faults along with seven aces. She won just 42 percent of points on her second serve as Kerber broke her five times out of nine chances. Williams was always going to be the aggressor, but she hit an uncharacteristic 46 unforced errors against a steely Kerber, who committed just 13.

“I think she’s definitely improved,” said Williams. “It’s always tricky playing a lefty, too, because it’s just different spins, you know, different shots that you just kind of have to get used to.”

It was the most unexpected victory for Kerber, a consistent, though not necessarily lethally threatening player on tour. She owned seven career titles coming into this event, but was dumped out here in the first round a year ago and hadn’t made the quarterfinals of a major since Wimbledon in 2014.

She is the first German woman to win here since Graf in 1994, and the first lefthander to hoist the Daphne Akhurst Trohpy since Monica Seles in 1996. Seeded No. 7, she’s the lowest seed to win the Australian Open since 2007, when the world No. 81 was victorious here. That player’s name? Serena Williams.

“I was missing a lot off the ground, coming to the net,” Serena added. “She kept hitting some great shots actually every time I came in. I think I kept picking the wrong shots coming into it. But, honestly, it’s something to learn from, just to try to get better.”

Kerber places herself sixth among players who have played more majors before winning one, the Australian Open being her 33rd Grand Slam appearance. She becomes just the fourth woman to save a match point en route to the title, matching feats of Li Na (2014), Williams (2005 and 2003), Jennifer Capriati (2002) and Seles (1991).

With the victory, Kerber hops to a career-high ranking of No. 2 in the world, behind only Williams. She also pockets $3.4 million AUD for the victory, more than one-third of her career haul.

Williams could never find second gear on Saturday night. She consistently made errors off both wings, served below her average, and made crying pleas at herself and towards her box as her mistakes kept Kerber in the match.

At one point, frustrated at herself in the first set, Williams held up her hands in a frustrated shrug as if to say, “What can I do?”

She will have to wait until at least the French Open in late May to try to equal Graf’s record, which has stood in tact since the German won in Paris in 1999, three months before Williams won her maiden major, at the U.S. Open that September.

Kerber was just 11 years old at the point, and still 12 years away from her first Grand Slam semifinal. It took over four more years for her to win a first major title, but Saturday night she proved it was worth the wait, a priceless smile spread across her face as she took out one of the best competitors this game has ever known.