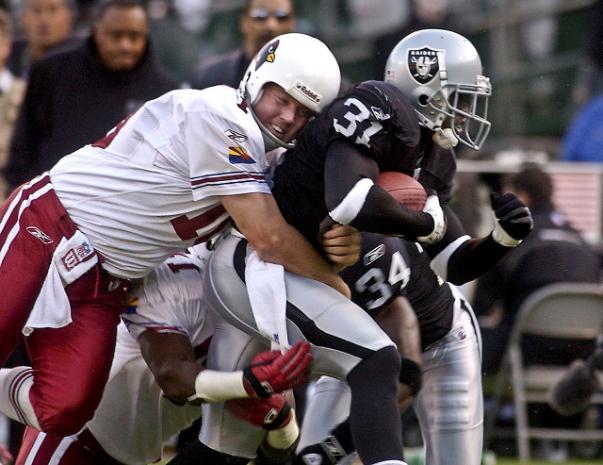 A recent book by former NFLer Phillip Buchanon outlined the problem faced by many pro athletes; that being relatives with their hands out. These moochers are a bigger concern for many players than learning the playbook. Some family members feel like they are owed some cash simply because of the random fact that they share the same family tree with a guy who has made it to the NFL. These leeches are some of the worst folks imaginable, and many times have, at best, loose ties to said player. Buchanon recounted how his “dear mother” wanted him to pay her one million dollars as soon as he was drafted back in 2002. She felt she was owed it for raising him!

You can check out the book here as it’s certainly a must for anyone knowing they’re about to come into money whether you’re a pro baller or not. Family will always say you have to take of your family when you’re the one with all the money, but when you are needing, many times, they aren’t as good at giving as they are at taking.

Below are a few very interesting excerpts from Buchanon’s book, New Money: Staying Rich (via FoxSports.com)

Soon after the draft, she told me that I owed her a million dollars for raising me for the past 18 years. Well, that was news to me. If my mother taught me anything, it’s that this is the most desperate demand that a parent can make on a child. The covenant of having a child is simply that you give your child everything possible, and they owe you nothing beyond a normal amount of love and respect. There is no financial arrangement. If you get old and infirm, and your kids are around to help you out at that point, then you’re lucky. It’s not written in the social contract. The mothers and fathers of the world have been rearing their kids for generations — in every culture imaginable — and it’s a one-way street when it comes to money. If they pay you back someday, and you really are going through hard times, then that’s just a bonus, a gratuity for being a great mother or father.

According to Buchanon, his mom had joked about the $1 million payment before, but she never sounded serious about it until after the Raiders drafted him out of the University of Miami.

My mother had said my debt to her was a million dollars before, but this time she was more serious than ever. If you do the math, one million dollars divided by 18 years of raising me was approximately $55,555.55 a year in restitution. Except, at age 17 I decided to move out of my mom’s house, choosing to live with a close friend and his father because I no longer felt secure in my own home. Why, you ask? Because my mother let people come in and out of our house and take what they wanted. So technically, even if we went by her logic, I only owed her $944,444.44 for her services over 17 years.

Is it petty that I’m knocking a year off her calculation? The fact that I have written this paragraph enrages me, merely because I’m entertaining the thought that her argument had any logic at all.

In the end, Buchanon didn’t give his mom the million dollars, but he did end up buying her a house. However, that turned into a quite the big mess.

When I told my mother she would have to take care of the maintenance after I paid off the mortgage on her house, she told me she would not be able to afford the upkeep on a house that big. In fact, she made it seem like it was my fault for picking out a house that big. In part, she was right. I bought her a house with my luxury taste and no real wisdom behind it. It was an uneducated purchase.

After realizing a big house probably wasn’t a good idea, Buchanon offered to buy his mom a smaller house. Only this time, Buchanon gave his mom a choice: I’ll buy you a house or give you $15,000 in cash.

I offered to buy her a comfortable house in my name for her to live in. This way she wouldn’t have to take out any loans or put my little sister and brothers in a situation where the roof over their heads could be taken away. She’d move out of the house that was too big for her and into this new one. Instead, she opted for $15,000 cash. She told me that if the new house didn’t have space for two living room sets, she didn’t want it.

While I certainly respect what mothers do for us kids, I don’t think demanding a cool million even before the ink dried on a rookie deal is too classy to say the least. Buchanon told of many other relatives wanting money for various things, but never being satisfied and always coming back for more. Pro athletes with very little experience handling money have a hard enough time holding onto their money long term. They are good at wasting money on fancy cars and houses that many can’t afford once their short pro careers end. Mix in greedy family members with even less concern for blowing money that they didn’t earn, and it’s no wonder that so many NFLers end up with no money at all a few years after their playing days are over.

With the NFL draft just about two weeks away, there will be a whole new crop of players getting serious money. These guys, especially high profile first rounders, will have more money than they have ever had with the signing of their names. They need to know how to handle that money and that means getting some knowledge about how to fend off family and friends who put their hand out early and often. The NFL gives classes on how to handle money, but I feel like I can help as well. I hate to see young millionaires blow their money or have it blown for them by aunt Weezy or cousin Bernie. So here are ten things the 2015 NFL draftees need to watch for when they get a phone call or text from family and friends once they get that first big check.