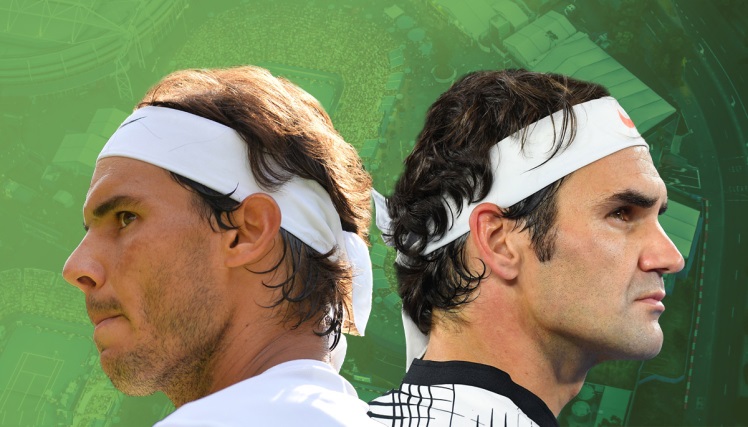 2017 has been the year where the tennis players that have slipped in the rankings are suddenly blazing to the forefront like Rafael Nadal and Roger Federer. Both players picked up the first two slams of the year, and their exciting Australian Open reminded fans of why they have one of the best friendly rivalries in the sport.

In the past 13 years, the two have pushed each other to ever higher greatness as Federer has more slams than any other male player in tennis history with 18, and Nadal is right behind him with 15.

Now that the Wimbledon 2017 draw has put them on a crash course with each other again, you can bet all eyes will be watching the two very closely. 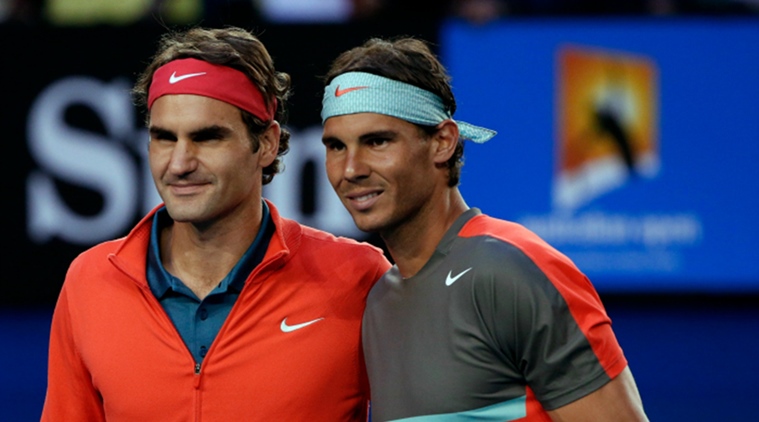 Like a couple of old friends gathering for a reunion, Roger Federer and Rafael Nadal could face each other in the Wimbledon final more than a decade after their first such meeting.

The draw at the All England Club on Friday established plenty of intriguing matchups along the way, too, including what appears to be a particularly tricky path for three-time champion Novak Djokovic, who’s been struggling for much of the past 12 months or so.

Djokovic will start against big-hitting Martin Klizan, and then could face another power player in the third round: 2009 U.S. Open champion Juan Martin del Potro, who stunned the Serb at the Rio Olympics last year. Get past that, and Djokovic might play the mercurial Gael Monfils or Fernando Lopez, who is coming off a grass-court title at Queen’s Club. His quarterfinal foe could be Dominic Thiem, who eliminated Djokovic in straight sets at the French Open.

If the seedings hold, Federer would meet Djokovic in the semifinals, with Nadal taking on Murray. That quartet has combined to win each of the past 14 titles at Wimbledon; Federer beat Nadal in the 2006 and 2007 finals, then lost to him in the 2008 title match.

Federer turns 36 on Aug. 8, and Nadal just turned 31, but both are back to playing quite well this year. They met in the Australian Open final in January, won by Federer, and Nadal earned his record 10th French Open title in June.

Murray’s spot at No. 1 in the ATP rankings is up for grabs this fortnight: He, Nadal, Wawrinka or Djokovic could all leave the All England Club with the top spot.

The WTA No. 1 ranking, which currently belongs to Angelique Kerber, also could change hands at tournament’s end. Four other women have a chance to take it: Karolina Pliskova, Simona Halep, Elina Svitolina and Caroline Wozniacki, who already has spent time at No. 1.

The potential women’s quarterfinals are Kerber vs. Svetlana Kuznetsova in a matchup between a pair of two-time major champions; 2016 U.S. Open runner-up Pliskova vs. two-time U.S. Open finalist Wozniacki; Svitolina vs. Dominika Cibulkova; and Halep vs. Johanna Konta, Britain’s best hope for its first women’s champion since Virginia Wade in 1977.

Konta withdrew from a grass-court tuneup in Eastbourne on Friday after hurting herself during a fall a day earlier, when she pulled off two big victories in one day after rain had jumbled the schedule, beating Kerber and French Open champion Jelena Ostapenko.

Five-time Wimbledon champion Venus Williams, seeded 10th in her 20th appearance at the tournament, was drawn to face Elise Mertens of Belgium in the first round. A publicist for Williams said that the former No. 1 will play at Wimbledon after a police report in Florida said the tennis star caused a car crash in early June that led to the death, two weeks later, of a passenger in another vehicle.

Williams and Petra Kvitova, who won Wimbledon in 2011 and 2014, are the only two past champions in the women’s field: Williams’ sister, Serena, is taking the rest of the year off because she is pregnant, while Maria Sharapova is injured.

Victoria Azarenka, a former No. 1 and two-time Australian Open champion, is appearing in a Grand Slam tournament for the first time in more than a year after giving birth to her first child. Her first-round match should be interesting – it’s against 18-year-old CiCi Bellis, an up-and-coming Californian. The winner could eventually take on Halep in the fourth round. 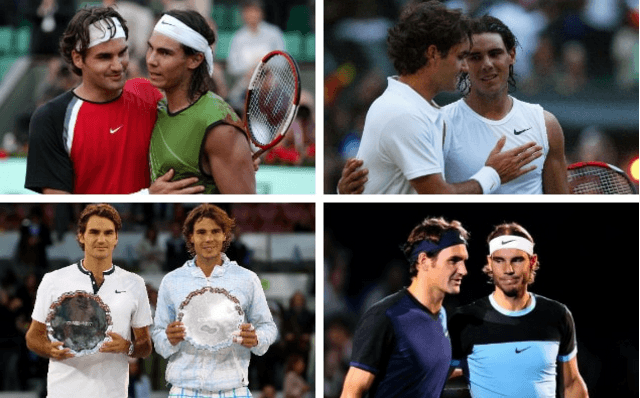 By the time Federer and Nadal first met it was March 2004 and Federer, aged 22, was already a multiple grand slam champion. Nadal, by contrast, was just 17 and taking his first tentative steps in the sport. Still, the young Spaniard won the match 6-3, 6-3 in Miami and people were beginning to take notice of the wild-haired youngster with the long shorts and singlet.

Just over a year later the pair met in a grand slam for the first time, and it was Nadal, on his 19th birthday, who claimed the victory in a four-set French Open semi-final. Nadal went on to win the title two days later, and well and truly announce himself as a potential rival to the great Swiss, who ended 2005 with six slam titles. 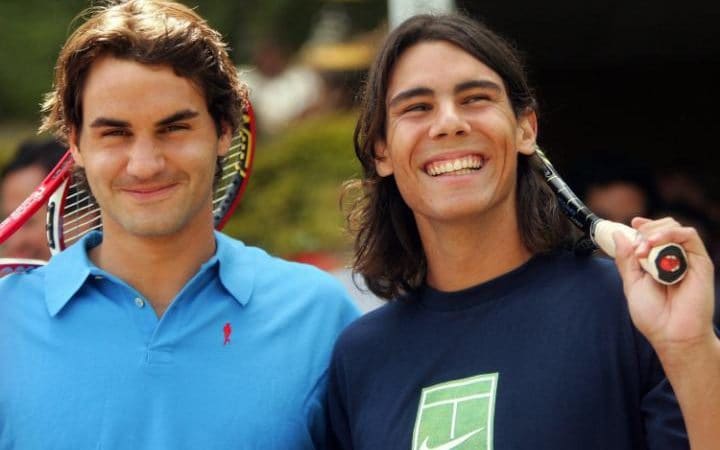 By the end of 2006, the two players had settled into a bit of a pattern. Federer would win pretty much all of the high-profile grass and hard-court titles, and Nadal would hoover up anything on clay. When they faced each other, it tended to be Nadal who come out on top, winning three clay-court finals that year – including the French Open – but losing the Wimbledon final in four sets.

Despite losing at SW19 though, the tournament was something of a breakthrough for Nadal, who reached his first Wimbledon final having never advanced further than the third round. The Spaniard was starting to believe that he could play on the grass, despite being written off by most as a clay-court only specialist. 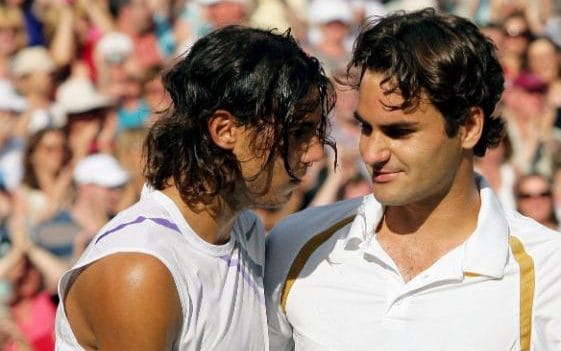 These were truly halcyon days for the sport when Federer and Nadal’s rivalry reached its apogee and took the tennis world’s breath away.

By the start of 2007 Federer and Nadal were ensconced as the world’s No 1 and 2, having finished each of the previous two years in that spot (and 2004 at No 1 in Federer’s case). The pair would end up finishing every year as one and two between 2005 and 2010, which is a record sequence in the history of the ATP rankings.

They were so dominant that they contested five grand slam finals between 2007 and 2009, with Nadal winning four of them. Each final was significant for different reasons, with Nadal’s 6-1, 6-3, 6-0 evisceration of his rival at Roland Garros in 2008 the most one-sided final between the two, as the snarling Spaniard clung on to the French Open title with the ferocity of a guard dog protecting the house from unwanted intruders.

The 2009 Australian Open final and 2007 Wimbledon finals were also memorable and hard-fought five-setters, with Nadal taking the former and Federer the latter.

But the peak of the rivalry, and surely of tennis as a whole, came on Sunday, July 6, 2008.  Federer bestrode the Centre Court like a colossus, wearing his personalized cardigan having worn a monogrammed white blazer the year before at a venue where he had won five straight titles. Nadal entered in his three-quarter length shorts and vest, looking like a swashbuckling pirate ravenously searching for booty.

Everything had come down to this – Nadal had inflicted four straight defeats on Federer at the French Open but this was Wimbledon, this was Federer’s territory. What ensued was the single greatest match in the history of the sport, with Nadal eventually triumphing in five sets at 9.15pm local time after 4 hours and 48 minutes of play as the two titans of the sport finished the match in almost darkness.

The King had been dethroned at last.

But though the final represented a high watermark for the sport, it did not instantly herald an era of dominance for the Spaniard.

Instead, debilitating knee problems wiped out much of his year in 2009, which contributed to his only defeat at Roland Garros between 2005 and 2014 and meant he could not defend his hard-earned Wimbledon title.

In his absence, Federer won his only French Open title and regained his crown at SW19 to take him to 15 slam titles, one clear of the record-holder Pete Sampras.

After that horrendous run of injuries, Nadal re-established himself at the top of the sport in 2010 by winning three majors, though strangely none of them included matches against Federer.

It was a sign of things to come, as gradually slam meetings between the two foes became less and less common, and 2010 would prove to be the last time the pair would end a calendar year in the top two spots.

The arrival of Novak Djokovic, who won three out of the four majors in 2011, meant matches between Nadal and Federer were becoming rarer, and all the more cherished for that.

Unfortunately though Federer could not get a handle on his rival when the pair met in the most high-profile matches. Nadal won the French Open final in four sets in 2011, and was the victor at the Australian Open semi-finals of 2012 and 2014, in four sets for the former and straight sets for the latter.

The Spaniard was still hoovering up slams and won eight in this period, but Federer picked up only two and none after Wimbledon in 2012. And Djokovic and Andy Murray‘s improvement meant Federer v Nadal matches were no longer solely finals. Twelve out of the 13 contests between the two has been finals between 2007 and 2010, whereas only two of the pair’s 11 meetings were finals between 2011 and 2014.

By the start of 2015, Federer was 33 and Nadal 28, and both men were veterans of the tour whose best days were widely thought to be behind them.

Federer because of his age, Nadal because of his lingering injury problems and reduced explosivity. Neither won a grand slam in the period, and the pair met just the once – in the final of the ATP 500 event in Basel, with Federer winning in three sets.

Murray v Djokovic had emerged as the dominant rivalry in the sport, and it was regretfully accepted that Federer and Nadal had enjoyed wonderful careers but were unlikely to ever add to their grand slam totals.

Amazingly, despite both players coming into the 2017 Australian Open final on the back of injury-ravaged years, Federer and Nadal rediscovered their best form and both stormed to the final.

It was the dream contest for the tournament and most supporters, and the match did not disappoint. In an undulating contest lasting more than three and a half hours, Federer eventually prevailed 6-4, 3-6, 6-1, 3-6, 6-3.

Since then Federer has completed two more wins over Nadal – destroying him in Indian Wells and then dispatching the Spaniard in straight sets in the Miami final.

Federer’s much-improved backhand has taken away Nadal’s principal tactic of sending looping forehands into his opponent’s ad corner, and the result was three wins for the Swiss in just over two months.

Now the majority of the whole tennis world sits back and prays that the pair will meet at Wimbledon in July for the first time since their epic final nine years ago.