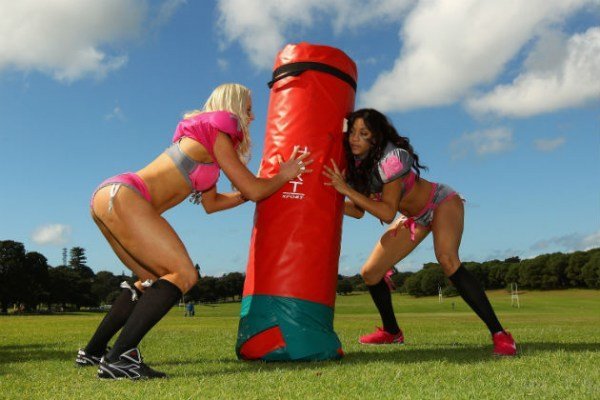 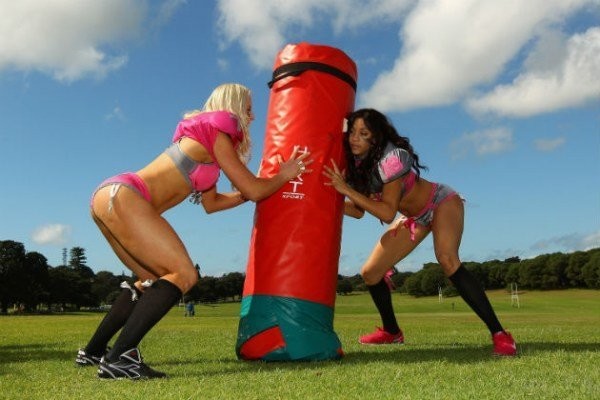 Week three wrapped up in the NFL with a few teams starting to roll with three game win streaks. I ended the third week of the season on a streak myself as I took another step toward my goal of hitting the $0 mark after ten weeks. I have now lost $10 (entire amount wagered each week) for two straight weeks and show no signs of that trend stopping anytime soon.

I did manage a win in my season long league so I stand at 2-1 there. That helped my confidence a bit in light of my 0-5 showing on DraftKings. Maybe I should swap over to FanDuel? Could it be the platform that’s making me appear ignorant in the world of NFL fantasy?

Nope. Already done the swap from FanDuel to DraftKings last year. So it’s me that’s the problem, not the platform. Besides, I like the interface of DraftKings a helluva a lot more than FanDuel.

Here are my results on DraftKings. Not a pretty sight, especially the one where I finished around 82,000th. Not my proudest moment. My highest point total was over 167, which isn’t bad for a 50/50 league, but will get you waxed in a GPP league with a ton of entries. I’ll show you some head to head comparisons near the end of this post also so you can see how my pitiful lineups compared to guys that are actually trying to win money.

Never mind the $5 balance shown. I put in a bit extra this week to try out FantasyLabs.com.

Just so you all know, I’m not resting on my unimpressive laurels. I am trying to get better each week by researching expert opinions. I used a few expert picks this week along with my gut feeling on about half my drafts. I am even reading a “self-help book” on daily fantasy football by Jonathan Bales. It’s a good read, but I have hit the midpoint where the numbers talk is pretty tough to digest. I can see why so many former accountants and financial workers are drawn to fantasy sports.

Don’t worry. If I start to crack the code on daily fantasy football, I won’t abandon my attempt to show you all how not to pick a lineup on DraftKings. I will just fake my stupidity the rest of the way until the ten week blueprint is over. Then I will write a self-help book on my journey from dimwitted fantasy player to the newest millionaire created by DraftKings in 2015.

It seems like every fantasy expert has their own favorite types of contests to play in. Bales like GPP because he focuses on drafting the outliers that fewer players are likely to draft, figuring that gives him an advantage in big fields of fantasy participants.

On the other side of the spectrum, Adam Levitan (@adamlevitan) likes cash games where he just has to beat half the field or one guy head to head. Levitan gave this bit of advice in a column last week, “Play the good players.” This is the same advice I got from the casino guy running the roulette wheel last week, telling me, “Bet good, you win.” This advice wasn’t very helpful on a pure luck game like roulette, but as obvious as it sounds when it comes to DFS, it is on point.

Play the good players so you don’t have to worry about a dark horse or mediocre player tanking…see the screenshot below from my 50/50 contest. Mine is on the left and the guy on the right finished in the money despite three bad draft choices. Thanks to the Jets defense and Tyler Eifert, I was unable to beat half the idiots in this contests. I hate to think how many players in that contest were newbies due to the 8,234 DK commercials that have aired in the past two weeks.

Let me show you how I did head to head against the top finisher in a bigger money contest. I will try to breakdown what he did right and what I did wrong. If you get confused, just take a look at my lineups from the past two weeks and never draft those guys. That is a good start to actually profiting on DraftKings. 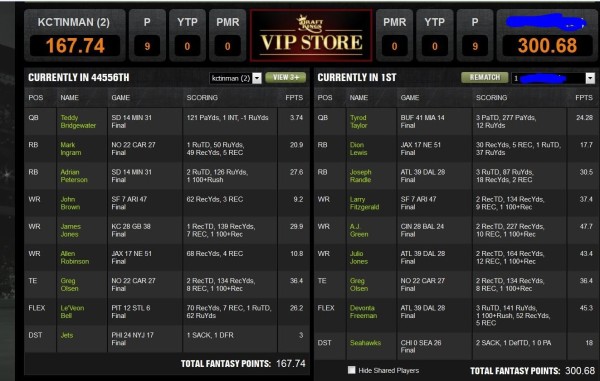 I took Teddy Bridgewater to be contrarian to separate myself from the big number of players in this contest. Good plan, bad player. Plenty of other QBs would have been as cheap as Teddy, but more reliable. Tyrod Taylor was the QB choice of the winner of this contest as you can see from the head to head picture above. Good player that can run and throw.

This guy won $6,000 for finishing first by the way. His worst player, Dion Lewis, had 17.7 points. That is more than the total of my three worst picks, John Brown, Jets defense, and ole Teddy Bridgewater. That stat alone shows how off I was with this lineup.

The #1 finisher also had two of the best three wideouts in football with Julio Jones and AJ Green. He mixed in a hot Larry Fitzgerald for another 37 points, which gave him 128.5 points from wideouts only!

He also got lucky with Devonta Freeman who exploded for over 45 DK points.

My only solace is that it’s better to be near the bottom of a big money contest than in the middle. Big swings are what win these contests….or so I’m told by the experts of fantasy football. If you could win $2k – $6K a year in these big leagues then it would matter not that you finished in the bottom ten percent the rest of the time as a casual player.

So what’s the plan for week four? I am going in on one big GPP contest and doing one lineup for the other $8 or $9 in 50/50 contests. Will I wreck my streak and actually profit this week? Or will I go down in flames just like the past two weeks? We’ll find out next week after I try the latest, greatest DFS strategy I have found…..playing good players.