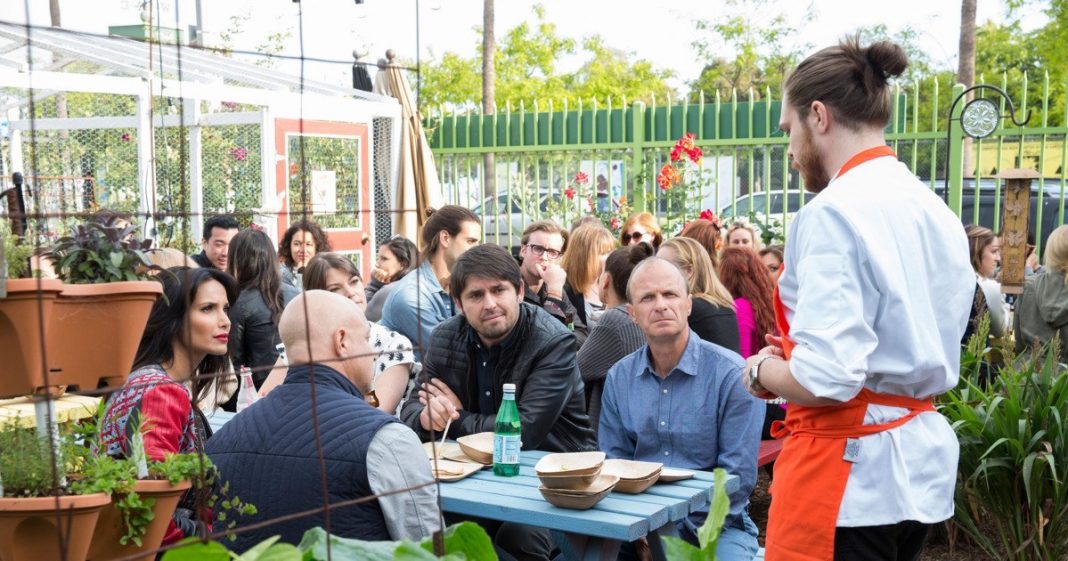 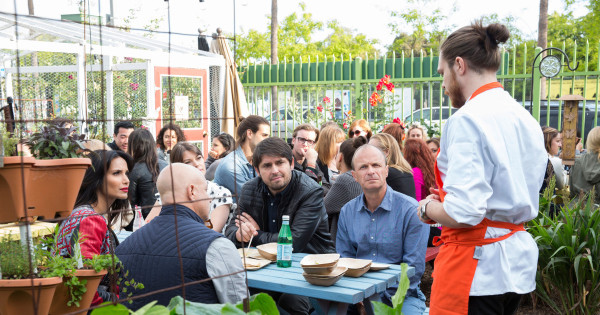 On the new episode of “Top Chef California,” the guest judge was one that has opened many pop-up food stands, which is the challenge the contestants face this week. Kwane said he was seasoned at running pop-up restaurants. The chefs were divided into four teams for the challenge. They had to cook the type of food each neighborhood they cook in is known for. They weren’t told in advance what those food types would be, so they couldn’t mentally prepare in advance.

Each team got to question locals in each neighborhood to find out about the preferred cuisine. They were then sent to go shop for their ingredients. The first neighborhood they had to cook in was Venice. Renee said she has been eating a vegan diet and lost 40 pounds doing so but Grayson said God put animals on this earth for people to eat and she wasn’t happy about having to cook a vegan dish.

Downtown Los Angeles was also a destination the chefs had to cook in, and they were expected to do Mexican cuisine. Wesley said he grew up in Alabama and had no experience cooking any Mexican dishes. Jeremy said he was used to Latin American flavors, and he thought he and his team would be fine. Grayson said she was going to pump up her dish this time since she didn’t last week. But the store was out of the beans she needed. Frances said she didn’t know how to make a Vegan dish, so she was going to make a Korean dish because they mainly include vegetables. Grayson substituted peppers and onions for the beans she couldn’t get. Grayson said it was hard for her to cook Vegan because she wasn’t inspired to do so.

The judges then went to each pop-up and asked for five servings at each one. Angelina said she felt like she cooked her chicken perfectly and even though she wasn’t used to cooking Persian cuisine she thought she would do OK. Marjorie’s yogurt mousse was a hit with the judges.

Kwame said a fish taco was his inspiration for the Mexican dish he was creating. The judges were told Kwame and his team hadn’t asked many questions about cooking Mexican cuisine. Kwame’s Chipotle glazed shrimp impressed Tom. Jeremy’s grilled skirt steak with almond puree was praised, but they said it didn’t taste like a bold Mexican dish.

The judges arrived in Venice to sample the next pop-up spot. Grayson said she knew her dish was good, but it would have been better with some pork in it. Tom said the chickpeas used in one of the dishes were dry.

The next stop for the judges was Koreatown. Karen and Giselle made wings and other Korean dishes. Carl’s cuttlefish and shrimp salad and Karen’s grilled Kalbi were presented along with the wings. Karen’s dish was praised for its flavor.

Back at the Top Chef kitchen, the four teams compared notes from their day. Padma called all four teams to the judge’s table. The team that prepared Persian cuisine won the challenge. Tom said it was obvious they enjoyed working together. The team said they relied on their local ambassador to help guide them in the right direction. The winning dish was prepared by Marjorie, and she was told the chef they worked with wanted to put her dish on his menu. The Vegan team was told they were the least successful of all four teams. They said Kwame’s vegan dish saved the team, but nothing else did. Grayson’s green been salad was deemed to simple for the competition. She admitted Vegan wasn’t her passion, and she didn’t love it. Phillip was told his dish did not have enough flavor. Padma said the Vegan group had the easiest task of all of them. The chefs were then dismissed so the judges could decide who was going home. Tom said he liked Phillip’s dish. When they were called back in Padma announced Renee was going home tonight. Tom told her she might get a second chance in Last Chance Kitchen.