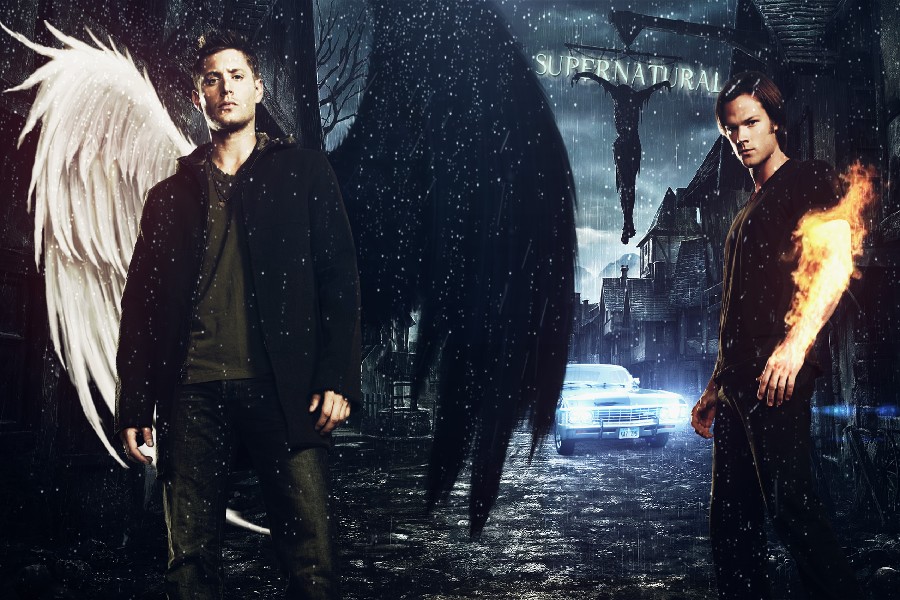 There are tons of Supernatural stuff out there. We’re not talking about ghosts and monsters but items inspired by the hit TV series. Why? Because every Supernatural fan would want a piece of Sam (Jared Padalecki), Dean (Jensen Ackles), Crowley (Mark Sheppard), Castiel (Misha Collins) and their other favorite characters apart from wearing flannel shirts and trench coats. But with all the stuff out there, it’s kind of tough to sort out as many fans want in on the action and sell at Amazon, Etsy, eBay and other sites with tons of trinkets, novelties, and apparel from Hot Topic. Here are some items we’d like to put up in our hunter’s cabin or makeshift motel room. Stuff that will put a smile on our face after a hard day’s normal work.

Supernatural Licensed Hunters Journal – It’s a dangerous job but someone has to log the unknown. Someone has to log how spirits work, how monsters hunt and how they can be stopped or killed. Since most of the spots they haunt don’t have wi-fi, hunters can’t blog about them but they can write, draw, and cut and paste news clips on their journals. That’s what John would do, so if you want to LARP as John or the brothers is the first two seasons, you’ll need the Supernatural Licensed Hunter’s Journal from Con*Quest Journals. Cool thing is, you don’t have to go saving people and hunting things to use it. Fill it up with your own memories. What would be cooler is if you’re into touring haunted houses and abandoned buildings. Complete it with the Supernatural Licensed Hunter’s Journal Page Pack featuring the pics of the show’s other characters or even the Journal Scrapbook Kit here.

Supernatural Novels – While we’re interested in reading, you can catch up on some material that hasn’t made it on-screen and will look good on your mantle, cabinet or book case along with your Supernatural DVDs. We’re talking about Supernatural novels. Not the ones seen on the show written by Carver Edlund/Chuck Shurley/God but by various authors. Sure, you can download them but trust us, it’s still better flipping through physical pages. No worries of your tablet dying during a long flight. Aside from novels, there are also some books about the show and about the fandom written by dedicated fans. One we can highly recommend is the best-selling Family Don’t End With Blood by our very own Lynn Zubernis, and this is the perfect stocking stuffer gift for any fan and would-be Supernatural fan.

Funko Pop Supernatural Set – there’s a shameful lack of Supernatural dolls or action figures out there. A sixth-scale Sam and Dean, Bobby, Castiel and Crowley are where the fun’s at, but no. Strangely, there’s a serious lack of those, so we’re forced to make due with Funko Pop’s very cute but very close vinyl display figures, of which there are plenty. Since Funko Pop plays heavily on hit TV shows, they’ll of course have a Supernatural line. Most of the show’s characters are available, some with variants. Available figures include Sam, Dean, Bobby, Castiel, Crowley, and Charlie. There are variants such as ordinary Castiel, Castiel with wings, Leviathan Castiel and Castiel as Emmanuel.

Q-pals Plush Supernatural Set – Q-Pals Supernatural plushies from Quantum Mechanix are just so cute, you’d want them in every room of the house. These little guys manage to capture the cast’s likenesses even in plush form much like Funkos. Cute and cuddly Sam, Dean, Castiel and even Bobby should keep you safe in bed from the Boogeymen or Strigas. Don’t worry; we won’t judge.

Always Keep Fighting and Other Shirts– by now, these shirts from Represent.com would be collector’s items as the Supernatural cast, especially Jared Padalecki only release them in limited quantities for their respective charities. Though they occasionally make new releases. They have pretty cool messages that fight depression like Always Keep Fighting, I Am Enough and Family Has Your Back. Like sports jersey’s, wear them proud or go on the road so far and frame and display them. Not only do you have a cool shirt, you also get to help out.

KAZ 2YZ Charms Bracelet – there are a lot of Supernatural trinkets out there, but this one from Supernatural Sickness practically has it all. It has the Baby charm at the center so you can give it to your fellow Supernatural partner as a gift or keep it for yourself. The other charms attached are the colt, bullets, a shovel, a dagger, a pentagram, the Impala and separate letters spelling out Baby’s plate number. It’s pretty inexpensive. The chain is made of silver plated alloy while the charms are made of zinc alloy. Or you can get the equally cool Supernatural Dean Sam Bracelet which also has plenty of charms including Dean’s amulet, a moose, a hellhound, angel wings, vampire fangs and Castiel’s necktie.

Supernatural 1967 Chevy Impala Sport, Black – Thanks to the show, Dean’s Baby, the 1967 Chevy Impala Sport is now included among pop culture’s iconic cars such as KITT from Knight Rider and Adam West’s Batmobile. The Impala from Greenlight, product number 19021 is a 1/18 Scale Diecast Model Toy Car with two figures, Sam and Dean of course, included which can ride inside. Play with them in private as they roll from town to town yelling Bitch and Jerk at each other.

QMX Sam and Dean Mini-Masters – We want more Supernatural action figures and we mean more! It’s unfortunate that there aren’t many out there. It’s a crime. We want Crowley, Castiel, Rowena, Bobby, and Charlie. And it’s not like there’s a shortage of SPN monsters out there like Hookman and Wendigo. Guess we’ll have to make due with QMX statues of Sam and Dean. There’s plenty of detail on these statues. Our only complaint though are the likenesses. Not sure if Jensen Ackles and Jared Padalecki have officially licensed their good looks for action figures since the figures from the Impala don’t fare much better but we fans take what we get.

Supernatural Board Games – unfortunately, Supernatural is very much absent in the world of video games. Depends on you if that’s good or bad but there are Supernatural board games available such as versions of CLUE and Monopoly. Enjoy playing these games with the family during boring rainy days since family is what the show is about. Expect sibling fights on who gets the Impala.

Chevrolet Impala Sport – Now the ultimate Supernatural collectible would be Baby itself. The 1967 Chevrolet Impala Sports sedan. Imagine driving up to any Supernatural convention or anywhere for that matter in a sleek black Impala and listening to classic rock. Just don’t impersonate any law enforcement agency. It’s a federal crime. There’s still plenty of cars to go around if you’re willing and loaded.

As honorable mentions, loving couples shouldn’t be without items with the Supernatural terms of endearment. We’re talking about Jerk and Bitch shirts, jewelry and coffee mugs. The show isn’t only about ghosts and monsters; it’s about love, family, and friendship. No wonder the show has lasted for such a long time. Non-Supernatural fans would wonder why you’re so offensive but actually love each other. And even if you’re ticked off at each other, you wouldn’t know the difference. Idjits!