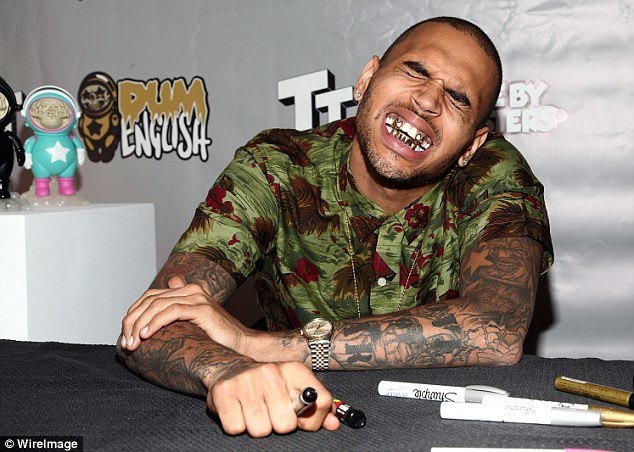 Chris Brown has been the victim of a recent break-in, where thieves held his aunt at gunpoint and managed to get away with $50,000. It is an unfortunate incident, but honestly with the amount of bragging and flaunting he does over social media, it isn’t all too surprising.

Chris Brown definitely needs a reality check if he thinks constantly showing off all of his designer clothes, cars, shoes, gold, etc. to the world isn’t somewhat asking for trouble.

Recently, Modern Family’s Sofia Vergara opened up to the Daily Mirror that she feels like she looks like a drag queen sometimes. The star said that many of her features seem so exaggerated and it often leaves her feeling like a man dressed in women’s clothing.

The star then goes on to say that Kim Kardashian is probably upset she is put up against her in many Hottest Celebrity polls and rankings. It looks like Sofia needs a big reality check if she thinks she is anything but a feminine knockout.

Recently 18-year-old reality star Kylie Jenner shared on social media that she had graduated from her online high school. In a series of Snapchats and Instagrams, Kylie shared videos and pictures of her huge graduation party, which included $30,000 watches, $7000 bracelets, 3 cakes and a team of synchronized singers.

In one Instagram the star thanks her mother Kris Jenner for keeping things “as normal as possible” for her. It looks like Kylie needs a bit of a reality check because if this is what she considers somewhat “normal,” she is definitely living in a different world than the rest of us.

Kendall Jenner has definitely made a name for herself in the modeling world. However, according to the reality star this wasn’t easy. The star tells V Magazine that being famous already made getting into the modeling world even harder.

Many fellow models have spoken out about Kendall’s remarks, claiming that there is no way it was harder for her, considering she is now featured in numerous high fashion campaigns just a year or two after she really began pursuing modeling.

I think Kendall might need a reality check if she truly believes her family’s name didn’t play a role in getting her foot into the door of the modeling world.

Lamar Odom has had his fair share of difficulties over the past few years. Things began to spiral downhill when Odom went missing for extended periods of times and struggling with substance abuse problems. His issues lead to the end of his marriage with Khloe Kardashian.

On numerous occasions, Khloe has talked publicly about her love for Lamar and has seemingly been open to possibly mending their marriage if Lamar could get things back on track. However, since this didn’t seem to be happening, Khloe decided to finalize their divorce and began dating NBA player James Harden. Of course, this is exactly when Lamar decides that perhaps he should get in touch with Khloe (as he was seen “ambushing” her at a Beverly Hills fitness studio).

It seems that Lamar needs a reality check to realize he had his chance, but now it’s too little too late.

Do you remember Heidi and Spencer from The Hills? If you don’t it’s not all too surprising considering they have been away from the limelight for quite a few years now.

However, the couple is making a comeback as they have begun filming a reality show that is based on them showing Hollywood up-and-comers the ins and outs of the “fame game.”

I think both of these “stars” need a reality check if they think they are suitable candidates to teach others how to navigate the entertainment business.

Kelly Osbourne was very vocal following her former co-host of Fashion Police Giuliana Rancic’s remarks about singer Zendaya’s dreadlocks that evoked racism. Kelly made it known that she was enraged by Giuliana’s words, even if Rancic herself apologized and ensured she did not mean to offend anyone.

However, months later Kelly seemed to go through a very similar controversy. While on The View, Kelly questioned Donald Trump who was going to clean his toilets if he is kicking out all the Mexicans from America. Subsequently, this resulted in a surge of backlash. Although Kelly somewhat apologized for her comments, it was definitely ironic to see this incident after Kelly was so adamant on shaming Giuliana for her comments.

Kelly Osbourne needs a reality check, as it seems karma definitely got her after she publicly ousted Giuliana who at the time was a good friend, the first chance she had.

Nick Viall is the only man who has ever been a finalist on two different seasons of The Bachelorette. Nick was first on Andi Dorfman’s season where he was confident in their relationship, until she decided to dump him. Then, Nick was on Kaitlyn Bristowe’s season where he was the runner-up. Nick even began his proposal speech to Kaitlyn, but she cut him off to let him know he wasn’t the one.

At first, Nick was obviously aware that things weren’t going all too well for him, calling himself “the biggest loser in the world” after another unsuccessful stint on The Bachelorette. However, recently Nick opened up to The Huffington Post saying, “To be perfect honest, I would seriously consider [being the Bachelor]. It’s obviously an incredible opportunity.”

Nick definitely needs a reality check if he thinks going through the Bachelor process for a third time will bring a different outcome, especially with the current success rate of Bachelor relationships.

Gwyneth Paltrow being on this list may not be much of a surprise. The actress who now runs her own lifestyle site, Goop, is constantly suggesting that fellow mothers and housewives go out and buy $2000 bowls and other extravagant, unnecessary items that pretty much no one but her can afford.

However, Gwyneth definitely earned her spot here when she recently posted an article on her blog that was a how-to guide on yawning. The star insists there is a certain etiquette that defines the perfect yawn.

Unfortunately, I think Gwyneth needs a reality check if she thinks anyone is going to follow her step-by-step guide every time they feel a yawn coming on.

Donald Trump has been the subject of many headlines this year. Since his announcement that he will be running for the spot of Republican presidential candidate, numerous of his controversial statements have created a firestorm amongst different groups across America.

One of the most notable remarks that got him in trouble was when he said Mexico is “sending people that have lots of problems” over the border including rapists, drug dealers and criminals.

Since then, Donald has also said offensive comments regarding both women and war veterans. Donald definitely needs a reality check if he thinks his current campaign will win him anything other than media attention.