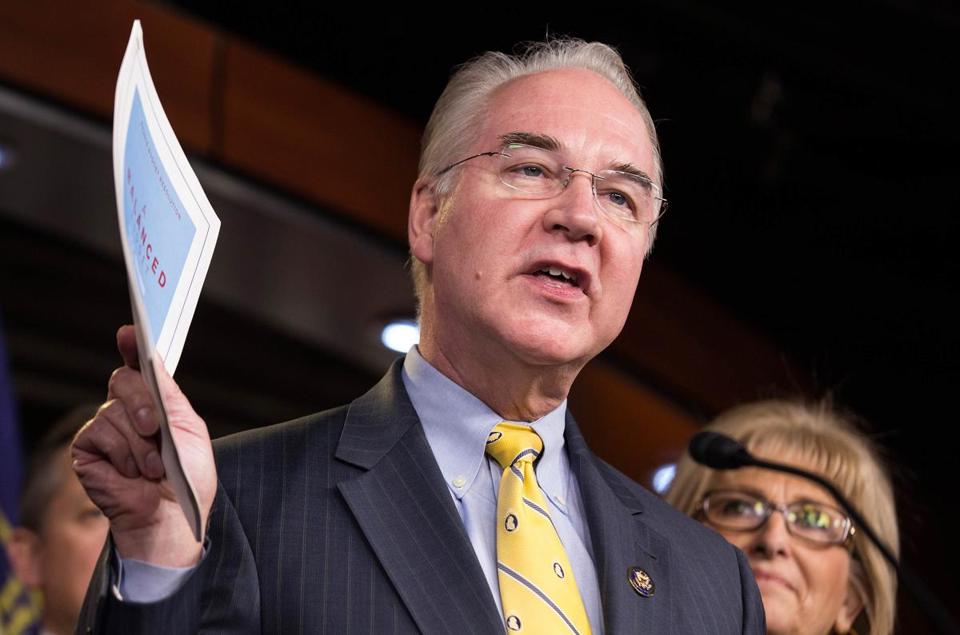 Health secretary selection Tom Price has been put through the Democrats paces with questions, and he’s given a few clues about the upcoming healthcare repeal and replace plan. The biggest takeaway is when Price suggested that the Obamacare replacement plan might not be as close as Donald Trump has suggested.

As we learned this weekend from Kellyanne Conway about the Trump administration’s ‘alternate facts,’ Price refused to say if the president did actually ‘alternate fact’ about working with him directly on a replacement plan. It has been suggested that this plan would kick in shortly after Price was confirmed to run the federal health department.

“President Trump said that he’s working with you on a replacement plan for the ACA, which is nearly finished and will be revealed after your confirmation. Is that true?” asked Sen. Sherrod Brown, D-Ohio.

Price, a medical doctor and congressman from Georgia, said, “It’s true that he said that, yes.”

Price’s dodge was met by laughter in the hearing room, including by his own wife, who was sitting behind him.

“Not that he’s ever done this before, but did the president lie?” Brown continued.

“I’ve had conversations with the president about health care, yes,” Price said.

Brown later said, “I’m still not sure if the president lied, not to you, but to us, the public, about whether he’s actually working with you.”

Overall, the Republican congressman and doctor had an easier ride in the Senate Finance Committee hearing than the one he received last week at the Health, Education, Labor and Pensions Committee, which is stocked with many of the Democratic Party’s more combative figures, including Sens. Bernie Sanders, Elizabeth Warren and Al Franken.

Still, the Finance Committee’s Democrats grilled Price over his personal trading in health stocks while voting on legislation affecting the health care industry. His past support for dramatically cutting Medicaid also came in for scrutiny.

Sen. Ron Wyden of Oregon blasted Price for underreporting the amount of stock he directed his broker to buy in an Australian pharmaceutical company, Innate Immunotherapeutics, last year. Price said a “clerical error” caused him to underreport the $250,000 in stock he owned as about $50,000. He learned about the company from his GOP colleague Rep. Chris Collins of New York, who is on the company’s board, and purchased some of the stock at a special, discounted rate. Price insisted he had been transparent and ethical and would divest himself of the stock if confirmed.

None of the committee’s Republicans appeared troubled by the stock issue, suggesting the Democrats, who are in the minority, will be unsuccessful in blocking Price’s nomination on this issue. “I feel like I’ve been asked to be a character witness in a felony trial,” said Sen. Johnny Isakson of Georgia, arguing the Democrats were exaggerating their objections to Price.

Sen. Orrin Hatch, the committee’s chairman, criticized his Democratic colleagues for “overly partisan” treatment of Trump’s cabinet nominees. Sen. Claire McCaskill, a Democrat from Missouri, pushed back on that, noting that Trump’s first nominee was confirmed 98 to 1 and more than 80 senators backed his second choice.

Price stressed that he would act in a bipartisan way as secretary and that he wanted to make sure the new, not-yet-formed health care plan would insure more Americans than Obamacare now does. But he was evasive when asked if no one would lose coverage after Obamacare is repealed, and he refused to flesh out the president’s plan for the senators.

Democratic senators said they were worried the president’s plan would mirror Price’s past support for health care and budget reforms that cut Medicaid and Medicare. At one point Price denied telling a Politico reporter in 2012 that requiring insurers to cover people with pre-existing medical conditions was a “terrible idea.” Price did, however, commit to continue allowing women to access contraception for free, an Obamacare reform. 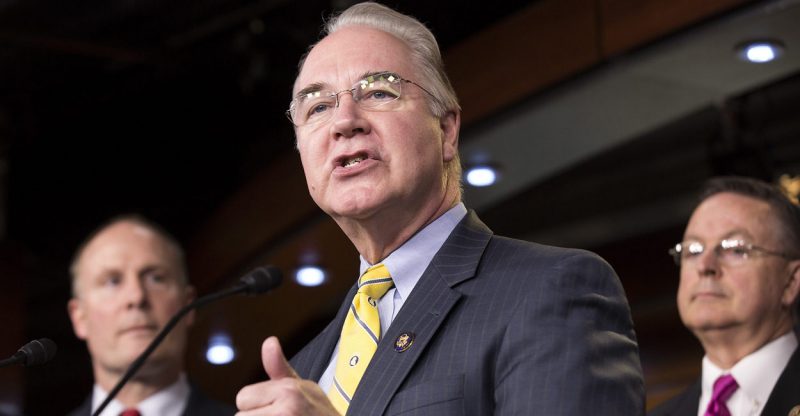 President Donald Trump’s selection to become health secretary told a Senate committee Tuesday that the new administration believes people with existing illnesses should not be denied health insurance, but committed to no details on that or any aspects of how Republicans will reshape President Barack Obama‘s health care law.

Rep. Tom Price, R-Ga., who would be at the center of GOP efforts to scuttle Obama’s statute and create new programs, frustrated Democrats probing for details of what Republicans will do. Instead, he repeatedly told them that the GOP goal is making health care affordable and “accessible for every single American” and to provide choices.

At a Senate Finance Committee hearing on Price’s nomination, Sen. Claire McCaskill, D-Mo., told him the upcoming Republican drive to scrap Obama’s overhaul will garner no Democratic votes and warned: “What we have after the repeal is Trump care.”

Democrats also condemned Price, a 12-year House veteran, for purchasing stocks in health care companies that could benefit from legislation he pushed. Top panel Democrat Ron Wyden of Oregon called that “a conflict of interest and an abuse of his position.”

Price, an orthopedic surgeon, told Wyden: “The reality is everything I did was ethical, above board, legal and transparent.”

Wyden questioned Price about the congressman’s purchase of around 400,000 shares last August of Innate Immunotherapeutics Ltd., an Australian drug company. Wyden said Price had bought the stock at prices only available to insider investors, had understated the value of those shares in papers filed with the Finance Committee, and had obtained the stocks at a time when he could affect congressional legislation.

Price appeared a day before Republicans head to Philadelphia for meetings on how to revamp the nation’s health care system. After solidly opposing Obama’s law since Democrats pushed it through Congress in 2010, Trump’s White House victory puts them in a position to deliver their pledge to repeal and replace it, but they’ve not decided how.

Democrats questioned Price about whether a Republican replacement would continue requiring insurers to cover people with pre-existing illnesses. Before Obama’s law, insurance companies did not have to do that because such consumers can be extremely costly to cover, though Trump has said he supports continuing such coverage.

“Nobody ought to lose insurance because they got a bad diagnosis,” Price said.

He said one way to cover people who are already sick is with high-risk pools, in which people with high medical costs are pooled together to avoid having their expenses drive up premiums for healthier consumers. That hasn’t worked well in the past, providing costly coverage to limited numbers of people.

His appearance also came days after Trump used Inauguration Day to issue an executive order that federal agencies curb fiscal burdens imposed by Obama’s overhaul and give states more flexibility to interpret it.

Asked by Wyden for assurances that no consumers will be hurt by that order, Price said he’d work with Congress to ensure people that “every single American has access to affordable health care.”

Obama’s health care law has expanded coverage by 20 million Americans, including around half benefiting from the statute’s expansion of Medicaid to more lower-income people.

Previous GOP proposals to revoke Obama’s law have eliminated that Medicaid expansion, which 31 states – including many headed by Republican governors – have adopted. Price repeatedly sidestepped Democrats’ questions about whether the forthcoming Republican plan would erase that expansion, saying it would be up to lawmakers.

He also avoided directly answering whether Republicans will propose turning Medicaid – currently provided to anyone who qualifies – into “block grants.” Those are lump sums of money that would go to states so they can make coverage decisions.

Until recently chairman of the House Budget Committee, Price has supported turning Medicaid into a block grant. The House’s most recent budget proposed cutting the program by $1 trillion over the next decade.

Sen. Ben Cardin, D-Md., told Price that GOP proposals on Medicaid send signals that they want to “cut the federal government’s commitment of access to minorities” for health care.

Price said judging Medicaid’s effectiveness by money is “measuring the wrong thing.” He said instead, its success should be judged by “outcome, whether people are covered.”

The lobbying group, America’s Health Insurance Plans, said the coverage requirement in Obama’s law is likely to be repealed.

An alternative could work like this: In 2018 there would be a one-time opportunity for uninsured people to enroll. After that, customers would have to show they had been covered for 12 months to get the same terms as everyone else. Otherwise they’d face higher premiums or a six-month waiting period.