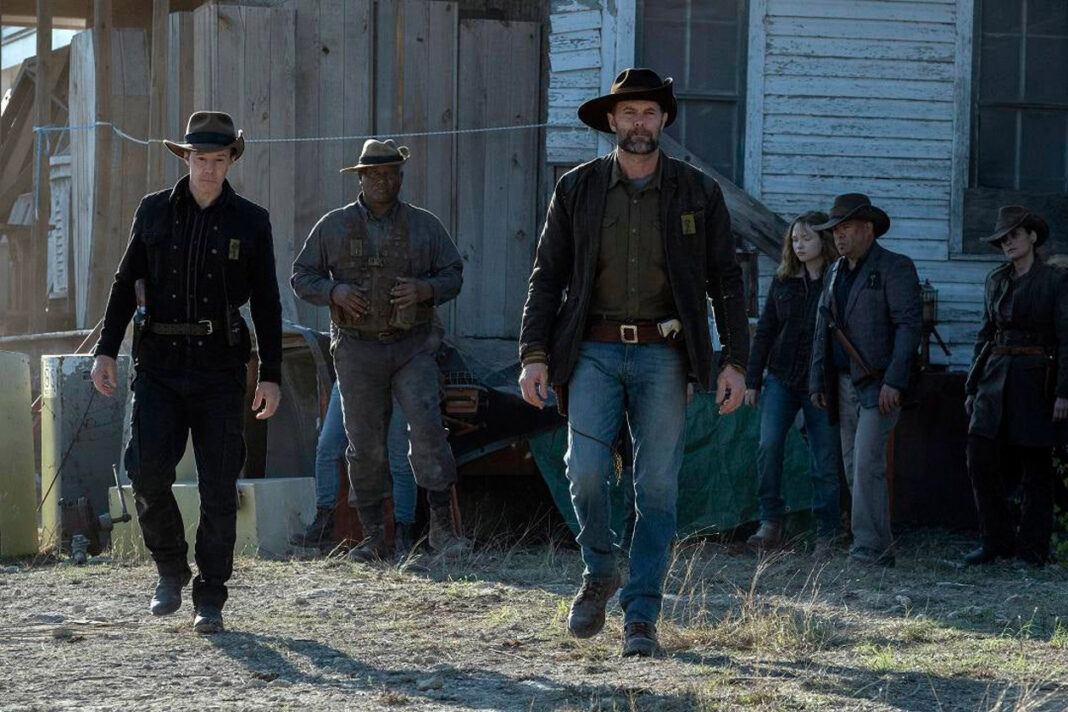 Ever had a family member bring a bunch of friends over and you felt like you needed to hide your wallet and other valuables? That thought times a million must have been going through the heads of the Townies of Alexandria when Rick led a half hurd of flesh-eaters home on “The Walking Dead,” where they got a taste of real-life beyond the walls.

Deanna is in complete shock. Her peaceful image of a new world is all but gone and here comes Rick with a thousand supper guests who don’t care for canned beans.

After Rick makes it safely inside the walls of the city, he tries to get the group settled, telling them they have to stick together and that the walls will hold. Daryl and company will return and lead the half herd away soon enough he says.

Our boy Aaron backs Rick and fesses up about losing his backpack which brought the Wolves to their door quite literally. He can feel guilty but losing the pack could have happened anytime. He was out in the world trying to do good when he lost it, so it’s not like he was looking for a strip club and heroin when he dropped the pack with pictures of Alexandria.

The Alexandrians are all shook up, and the are not down with the new food rations, even though most of the Townies look like they could use some time away from the dinner table.

Deanna’s other son Spencer makes a nice speech about how they all can’t just fall apart because of the terrible events of late. He then proceeded to steal extra food and alcohol for himself. He believes just like the rest of the terrified Townies that the world is near the end with Roamers leaning on their walls.

Spencer turns out to be a big baby, telling his mom it’s her fault everyone in the town is weak. She made everyone’s life easier, and they loved it, but now that shit hit the fan they wanted tough love? Grow up, boy!

So we have two groups that want to go on a suicide mission to hunt loved ones. Carl’s plan to look for Enid is foiled when Ron (Jessie’s son) says he will snitch on him to save his life. Maggie is determined to look for Glenn and Aaron is going along no matter how much she protests.

We got more medical horror with the worst doctor left in America as she sits and pouts as her patient is dying of an infection. Tara tries to boost her confidence, but they need a Tony Robbins type to get her going. Hopefully, Tony survived the initial apocalypse, but we can’t be sure.

Jessie had the easiest zombie kill ever as she shanked one through the eye with the door cracked open. She then went into a mini Tupac speech about how they have to “Ride or Die.”

Check that….”fight or die.” Either would work, though. Pac had a good message for a normal world or the jacked up one Jessie inhabits.

The Townies start painting names of the fallen on the wall as Aaron and Maggie make their way through a tunnel under the wall and past the half herd. It might have been a good idea to tell the others about the escape tunnel just in case.

These two had the best, yet nastiest scene when they went up against some slimy water logged Walkers. Maggie had a hard time with the kill as she got her arm caught inside the rib cage of the poor bastard that had been underwater for a long time.

Aaron ended up killing both creatures, proving that Maggie did need his help. No one is safe out in the world, no matter how skilled they are at killing. There are dangers at every turn, and it only takes one slip up to get bit.

Our poor excuse for a doctor got a tiny win as she figured out how to remove some of the infection from her remaining patient’s leg. More small successes would help her with bigger issues. Cure a headache, bandage up a finger, etc.

Ron can’t be trusted. He ratted out Carl for his own good according to his story, but he has ulterior motives. He has bad intentions and learning how to shoot from Rick will only make him more dangerous….to Rick.

The big surprise of this week’s Walking Dead was….wait for it…..Maggie is pregnant! Wow….who cares.

This isn’t some played out sitcom that needs a baby infused into the story line to keep viewers interested. What’s a baby going to do?

The same thing Judith does. Nothing. We are interested in the story as it is. No need for this. Sure it makes it sadder that Glenn has been splattered in front of a nasty dumpster, but other than that I don’t look forward to a fat Maggie slowing the group down.

Maybe Daryl gets to name this kid too, and that will be a plus, but other than that I’m out on adding a toddler to the mix.

Anyway, the tunnel is a failure since it’s too close to the Walkers after all. Maggie and Aaron have to turn back. Maggie ends up taking Glenn’s name off the wall. Hope is all she has left of him now.

Deanna is still freaked out and is not the same woman she was when she first appeared on TWD. She has aged 15 years and is now on the brink of a nervous breakdown. She went completely psycho on a Walker Wolf with a broken bottle before Rick finished the thing off.

She knows Rick is the leader needed at the moment. She feels like a failure, yet her vision of a new world could work out in the future. They all just need Rick to make sure they survive long enough to build that world. It will come in stages.

Stage one involves trusting nearly no one, killing any possible threats and never relaxing. Stage 15 will involve Deanna’s best ideas, and they can get back to sipping wine and reading the classics on a front porch.

This episode saw plenty of efforts by Grimes’ group trying to boost the confidence of the Townies. Rosita told Spencer that he saved the town with his shot on the Wolves truck driver that was headed to destroy the walls.

Jessie and Rick found some bliss as they stood on the edge of the end of the world. She’s fully onboard with the sheriff and could wind up being the next pregnant character in a couple of seasons. Maybe by next week the way things were headed in that garage. That’s not a suggestion Scott Gimple.

At the end of the episode, I’m not sure if Deanna fully snapped or if she has come to grips with the reality of monsters being just a few feet away from her town. It looks like the latter as she patted the fence with the silhouette of Walkers as if to say, “I accept you are here, and we will deal with you in this moment.”

There’s only three episodes left so next week will deal with Daryl and his tiny group. I doubt we will see much info on Glenn until the half season finale. And I’m guessing it will only be a hint of his fate.

Maybe he can still be some kind of father to Maggie’s child even if he is a Walker. If Michonne can remove his jaw and arms, he would be rendered pretty harmless even to a baby. His visits would still need to be supervised, though. Let’s not be reckless.