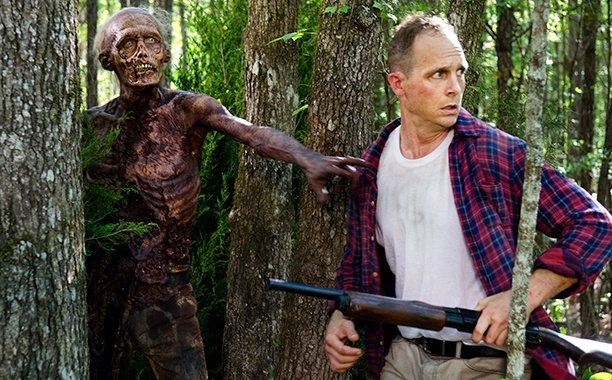 What a season premiere! It was big. It was nasty. It was insane!  Here’s a few observations before jumping into the recap of “The Walking Dead.”

OK, the entire episode bounces back and forth between black and white flashbacks and the the present. The FBs are immediately after Rick had blown Pete’s brains all over Abe. We also get a look at the planning stages of the walker parade.

As for the present, it is mostly the execution of the plan to walk the undead out of the canyon trap and far away from Alexandria before they escape on their own. The group wanted to do a dry run, but that it went live once the tractor trailer fell over the cliff, freeing thousands of nasty walkers, many of which were looking for a quiet community like Alexandria.

We see a lot of Deanna still in a state of shock as she defers to Rick on all decisions. She has his back completely from what I can tell.

There is a problem with Pete’s execution. His older son Ron isn’t taking it too well and is none too pleased to see his old man being hauled off and dumped in the woods like an animal. Not sure if the kid expected a big funeral for this murderer or what.

During the flashbacks we see Abe is still drinking too much and Glenn brought in Nicholas for medical help after the guy tried to kill Glenn in the season finale last season. Daryl and Rick disagree about scouting for more people to add to their town. Rick wants to play it safe of course, but Daryl sees the value in adding strength to the group with good people.

Our guy Morgan is under house arrest until Rick can be sure he is no threat. Morgan was not the most stable person the last time they ran into each other of course.

Morgan has more humanity left in him than Rick, but he also sees the good in Rick and won’t let that go even though Rick is clearly ruthless when the need arises.

The two men first see the walker horde in the canyon when they go to bury Pete in the woods. They end up saving Ron as he was chased by some rotters. The boy was not too appreciative as you can imagine. Rick did end up digging a proper grave when push came to shove, even for the murderous, wife beating Pete. 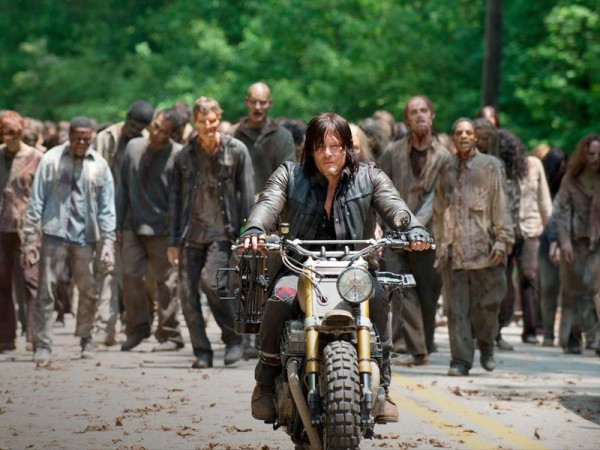 The planning phase for the zombie parade was interesting, but insane as well. No way they could control thousands of flesh eating humans, no matter how much thought they put into it. It was going to be like herding cats. Really slow, blood thirsty cats.

Since Comcast is taking over eight days to fix my cable, I have watched this premiere from my public library with their wi-fi. I had to sit through commercials instead of fast forwarding them so it seemed like this episode lasted three hours with 82 Tide ads and trailers for some awful looking horror flick.

Enough of my complaining. Just glad Comcast doesn’t provide water to the city.

Carol is still playing the role of innocent mom so she can get insider info on the townies. That’s smart. She can bust out into lethal mode anytime she needs to as we saw with her threatening Pete last season.

The tractor store scene was chaotic. Nicholas’ balls dropped though and he was of actual help to Glenn and Heath (townie that had been on a mission).  It will take a while for Glenn to trust the man who tried to murder him, but this was a good first step. This is how the world changes like Maggie mentioned between she and Tara. Trust has to built sometime or everyone just destroys each other.

It’s once again apparent that the townies are not ready to defend themselves. Rick orders them to kill a few straggling walkers with their shovels, but they just cower and have to be saved by Morgan who jumps in first. Tough love is fine, but not when the end result could have been a fellow human eaten at the construction site. 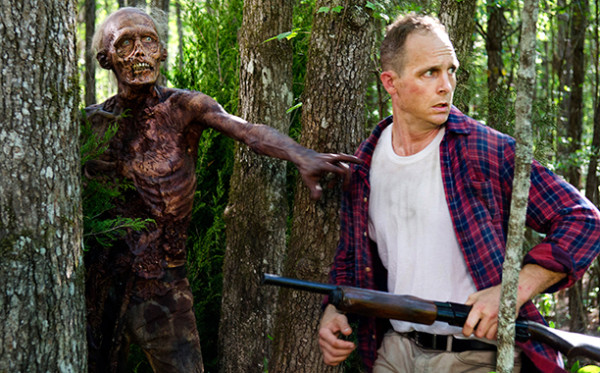 Rick had to put Carter in his place after he walks in on the guy pointing a gun at Eugene since he overheard Carter’s idea of killing Rick. Lucky for Carter, Rick was in a good mood and not in a hurry to whack another founding member of Alexandria. He let him off the hook, but later had to run a shank through his brain after he got bit during the face eating portion of the walker parade. 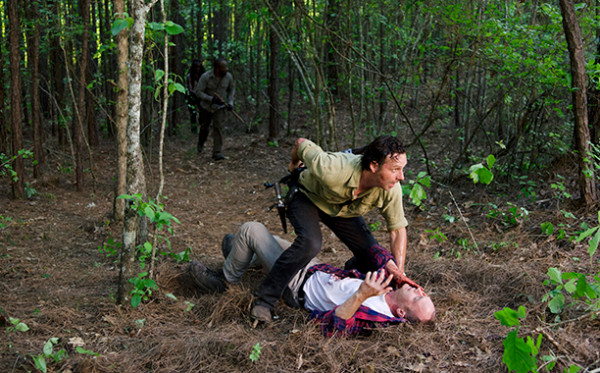 I don’t know why Michonne and Morgan looked so hurt after Rick ended Carter who was moments away from walker mode. He had no choice obviously. I guess Rick showing humanity in not killing him after hearing about the murder plot made it worse that he eventually had to end his life.

Gotta keep moving! No time for tears over a guy that was “going to get himself killed anyway,” just like Rick had told Morgan.

The talk between Jessie and Rick didn’t move their story forward at all. The mom in her defends Ron and says she is willing to fight….good thing cause a horde of walkers are rerouting their GPS units.

The parade plan was actually working, pitiful looking wall at the curve and all. Abe had drawn back a few stragglers onto the main road. Everything was going as planned, but even the best laid plans…..

A freaking horn roars that gets the attention of well over half the horde and they start heading in the direction of that sound. Where’s it coming from? Home according to Rick. Who’s doing it?

That’s a question that will be answered next week. I first guessed Ron, but think now that it may be Gabriel. Trumpet, horn, Gabriel, anybody? It’s a fit and he can’t be trusted.

Maybe it’s the Wolves, which was my initial thought even before Ron. But not if the sound is coming from Alexandria, right? Unless they took the place over and if so, why draw walkers to their own safe haven?

Lots of questions need to be answered next week. I knew the walker parade could not be wrapped up in a single episode. That was a huge undertaking. I would like to have found out where they were taking the herd. I’m guessing a big pit or another trap. Maybe even some dynamite to trap them in a tunnel.

We’ll have to wait until next week to find out since I’m not an expert in leading thousands of walkers safely away in an orderly fashion.