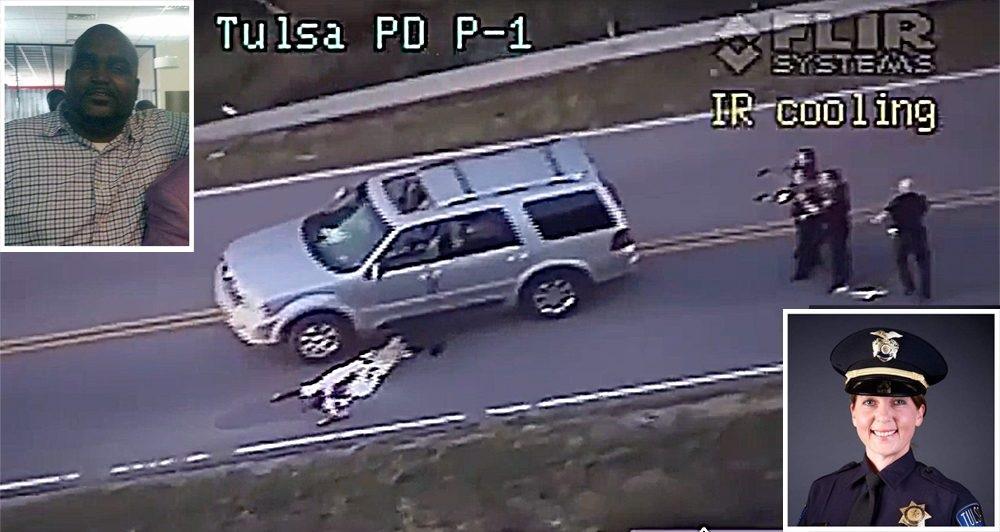 There is a frustration that I realized I am subconsciously learning to manage. It’s a frustration that grows bigger and one that leaves me numb with every killing of an unarmed black person. I want to believe in the good in people, and I even say to myself that these occurrences aren’t the norm. But part and some may argue all, of that is a lie. These incidents happen on a regular basis, and I’m convinced that black people are systematically being exterminated by a secret society of racists who wear the color blue and have taken a vow to eliminate us. Not all of them are a part of this killing crew, but the ones that are, right now, are winning. Sounds extreme? You bet. But it’s what seems to be happening, and honestly, I cannot care less what people think of that theory.

Terence Crutcher should not be dead. There should not be a video of his murder, and we should not be having this conversation yet again. You know the one where white folks give all the reasons why Crutcher’s death has nothing to do with racism; how racism doesn’t exist. I mean come on white people. You can only use the “I thought it was my Taser” narrative so many times before it becomes crystal clear you’re killing us on purpose. If a cop doesn’t know the difference between a gun and a Taser, good God get their ass off the street, immediately.

People who have no motherfucking clue as to what it means to be black in America’s 2016 want to give their two cents on how to stop the killing. But all of their excuses place the blame on the ones losing their lives. They want to tell us black folks what we should do to prevent being killed by law enforcement. “Don’t run,” they say. “Don’t resist,” they tell us. “Don’t show yourself as a threat.” That’s all bullshit. The day a known terrorist, who set off a bomb in New York, survives a shootout while a black man with car trouble ends up dead, there is nothing a “caring” white person can say that holds any weight. Let’s face it- our lives just don’t matter!

All the hopelessness and fear I feel more often than I care to admit leads me to this question- What does the future of the African American look like in the 21st century? How do we proceed like everything is okay? How do we proceed despite racial injustices and the possibility of becoming an unwanted hashtag staring us in our faces daily? I don’t want to be a hashtag. Not for joining the ranks of black people, being black in a world full of trigger-happy “blue lives” that shoot first and ask questions never. I don’t want my brothers or significant other or mother or anyone to be a hashtag. I’m tired of sharing “happy” videos on social media because I need a break from all the madness. I’m tired. 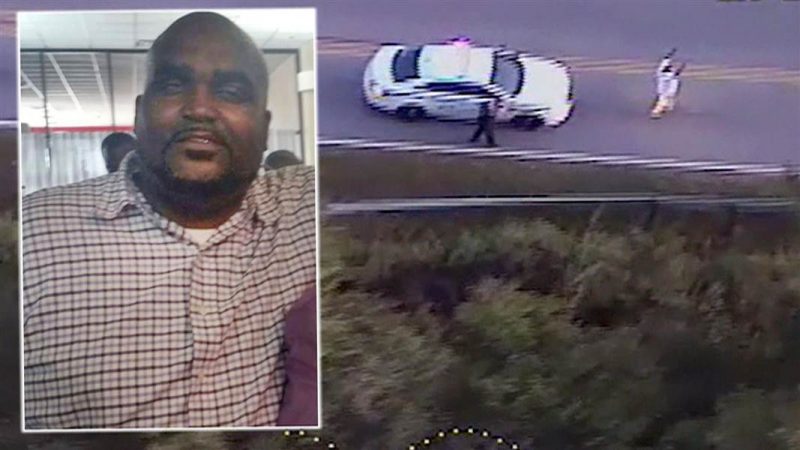 As a 31-year-old black woman living in the one of the most diverse city’s in the world (Los Angeles), my focus should be on my career, starting a family, buying a house and looking for ways to build a legacy. I should be thinking about how to make the most out of my life. These things should be my reality. Not half of the time. Not three-fourths of the time; all of the time. I should be planning my next big life moment. Instead, I am planning ways I can effectively contest unfair treatment during a traffic stop. I’m mapping out innocent responses for scenarios involving law enforcement so that I can come up with ways my brothers (their safety is always on my mind) can combat the pattern of outcomes that, here lately, never work out in our favor. The truth of the matter is we live in a racially charged society that has placed black people and other folks of color at the lowest point on the totem pole. Anyone who doesn’t see that is in denial. If you are white and refuse to accept this truth, you are the problem. If you are black and think that black people just need to try harder, you are the problem. Black people aren’t always the source of the issue. If you stop and think about the system in place and research and learn about this country’s history, you’d understand what I, and other people who write about this issue often, are saying.

Black people are in their emotions right now and have every right to be. Living in fear is not fun. Not wanting help when you need it from people who swore to protect you because you might not make it is not fun. We voice our frustrations because we feel powerless in preventing our brothers and sisters from dying. 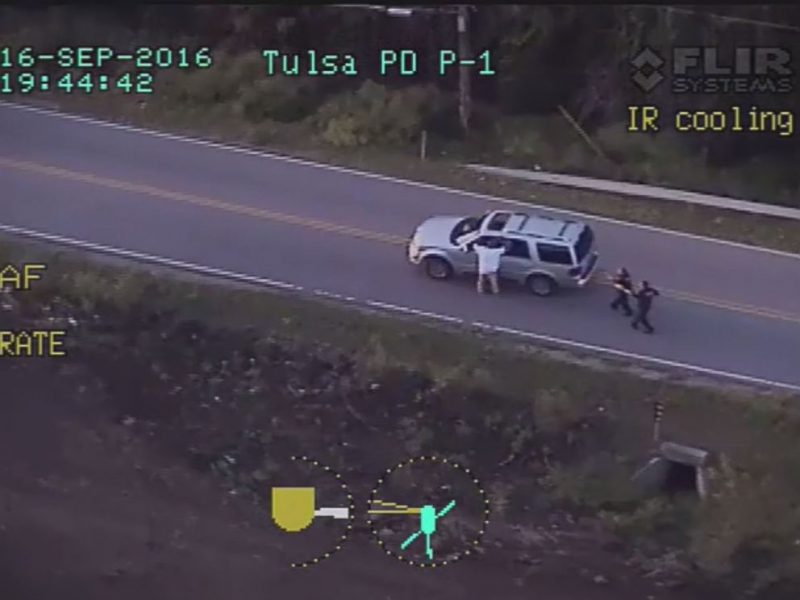 Below are five problems with the shooting where it becomes one person’s word over another:

Hands up vs. refusing commands

Multiple police cameras, including ones mounted in squad cars and in a helicopter, captured the Crutcher shooting on tape. In the video, Crutcher can be seen with his hands raised above his head prior to his death.

Attorneys for Shelby and the Crutcher family are interpreting his response to the Tulsa officer in different ways.

Since the shooting, there have been reports suggesting that Crutcher was high on PCP. In response, Tulsa Police Sergeant David Walker, the department’s lead homicide detective, confirmed Tuesday that police discovered PCP in Crutcher’s SUV.

Authorities have not said whether PCP was found in Crutcher’s system at the time of his death. That hasn’t stopped both sides from reacting to the possibility that he was intoxicated. 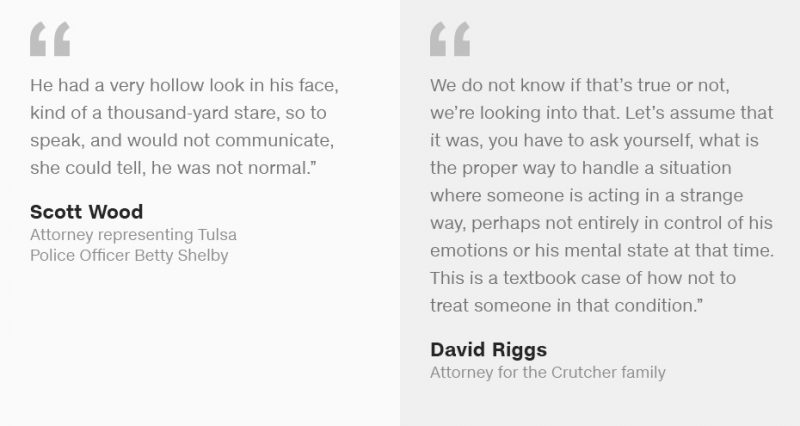 Was Crutcher’s driver-side window open or closed? That’s one of the key questions still remaining in his death. While police have released video footage, none of the camera angles definitively show whether his window was open or closed.

That’s important because one of the reasons that Shelby is said to have fired at Crutcher was due to the fact he started reaching into his vehicle. 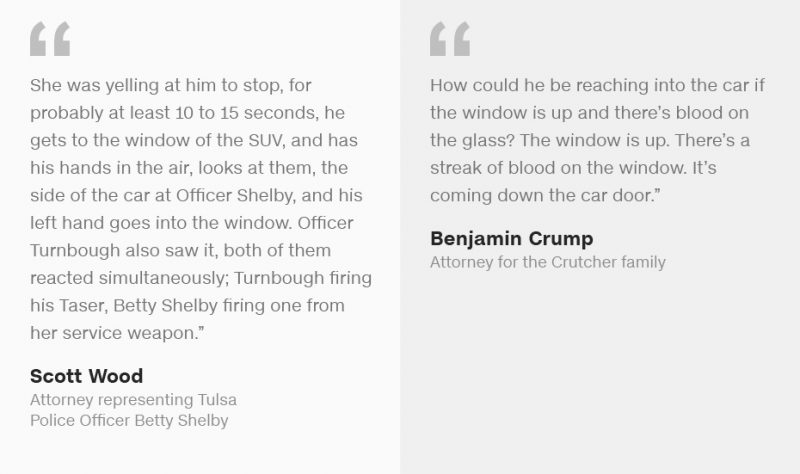 Chuck Jordan, Tulsa’s police chief, said Monday at a news conference that no gun was found in Crutcher’s SUV.

For Shelby, the potential threat of a weapon was a factor behind why she fired her weapon, her attorney said.

An officer called Crutcher a ‘bad dude.’ Does that matter?

In footage from the police helicopter, which circled in the sky above the car, the pilot can be heard describing Crutcher as a “bad dude.” Shelby’s husband, also a Tulsa police officer, was in the helicopter during the shooting. According to Shelby’s lawyer, he was not the person who said “bad dude.”

Tiffany Crutcher and her attorneys subsequently blasted Tulsa Police over the offensive comment. While acknowledging the remark, Wood said it did not impact his client’s actions in the moments leading up to the shooting. 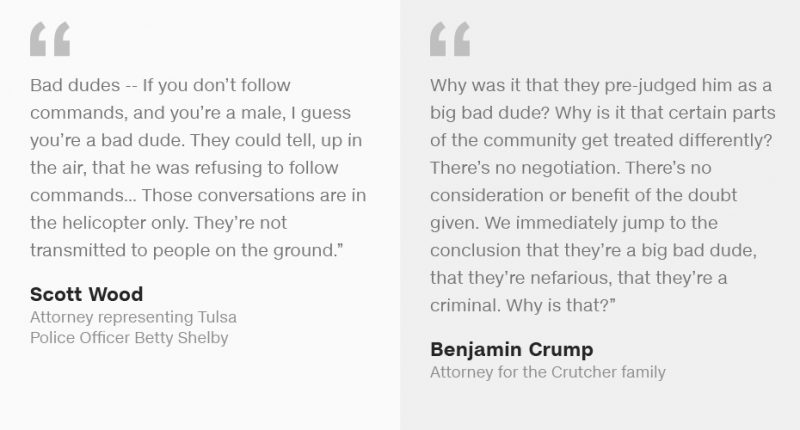