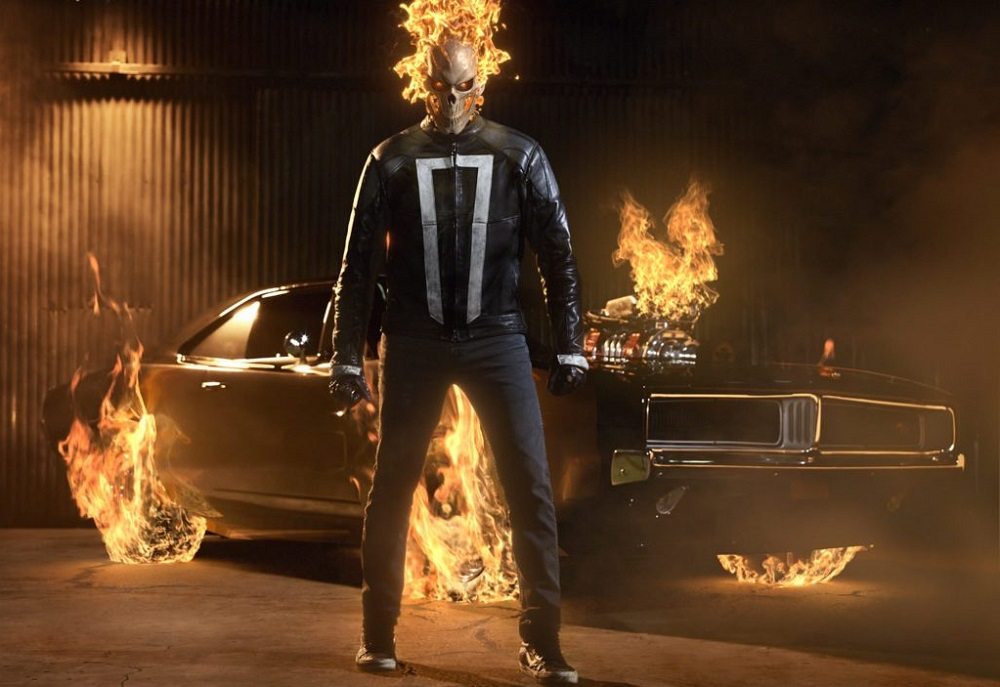 “Everyone gets attached to something, eventually.”

Yes. This author is attached to Ghost Rider much like others are to Superman or Batman. The Ghost Rider in Marvel’s Agents of SHIELD was amazing. There is, however, one major concern when we see the trailer for the next episode.

So far they have Robbie Reyes pegged. He’s a Latino mechanic working in an auto shop named Canelo’s. He’s based in LA. He has a handicapped brother in a wheelchair. He wears the same jacket, and the car is as cool a 69 Dodge Charger could be. However, what we have now is a flaming skull which is opposed to the comics version of a flaming mask/helmet. They did a fine job with the effects and looked like a mix of the skulls from the first two movies. We also clearly see a burning spine. The comics version didn’t show any indication of being as skeletal as other riders because he looks more like a guy with a wetsuit with a mask/helmet. The AOS version’s skull looks metallic with more menacing eye sockets which could be an homage to the comics version. Not that the skull is really a problem. In the movies, people know that Ghost Rider has a burning skull, and AOS didn’t want their rider to depart too much from what people are familiar with.

Overall the Ghost Rider AOS version looks great. If this Robbie Reyes was already past his true origin story, then he’s already agreed to kill those who his possessing spirit finds guilty, which explains the surprising blood splatter in the beginning of the episode. He’s not as conflicted in killing as the Danny Ketch version. The hell-charger was spot on as what a ‘69 Charger would look like. It doesn’t look as slick as it’s drawn in the comics but it looks cool just the same with the flaming wheels and engine. We also get limited bonehead appearance due to TV budget constraints, but that’s expected since they pulled it off nicely. 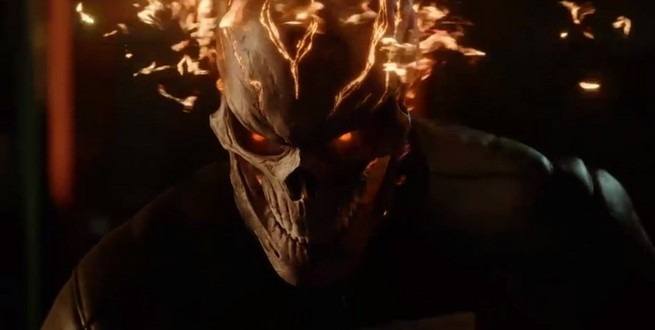 What’s worrisome is what’s in store next episode as Robbie explains to Daisy how he got his powers. He mentioned selling his soul to the devil which of course makes Daisy skeptical. The impression I get from this is that the MCU or is planning to mix together the origins of Blaze and Robbie. The selling the soul to the devil thing was John Blaze while evil spirit possession was Robbie’s. In the comics, Robbie is possessed by a powerful evil spirit of his Satanist and Russian mafioso uncle named Eli Morrow. Getting possessed by a powerful ghost is not new in Marvel. The original Wallow character in the comics (as opposed to the water nephilim in the first movie) was the ghost of a suicide victim bonded to a ceramic doll and has the power to spread depression and suicidal thoughts and was later turned by Blackheart into a spirit of vengeance. Robbie also talks of vengeance while the comics version simply flames into action when needed. This new Ghost Rider is clearly on a mission of vengeance, but his fatal brand of vengeance is unlike the originals.

The problem we have here is if Robbie takes on Blaze’s origin of dealing with the devil, we may be looking at the only Ghost Rider incarnation of the MCU. We might not get to see John Blaze or Danny Ketch and their hell cycles. It’s understandable that the show, or the MCU, in general, is distancing the character from the stigma of the failed movies but it’s disappointing we might not get the Blaze or Ketch version in the future. Many were looking forward to see Ghost Rider on Netflix instead. The darker and somewhat risqué tone of Agents of SHIELD is immediately apparent and seems to take a page from Netflix’s street-level offerings.

I also like Robbie Reyes in the comics, but I am more attached to the Ketch version and the mythos surrounding Blaze and Ketch which was laid out by writer Howard Mackie. Their mythos stretches back to pre-Atlantean times but was somewhat ruined to become colonial era and later fixed by making the spirits of vengeance as ancient agents of heaven. At this point, however, we’ll take what we can get as long as they do a better job than the hacks that made the films. No offense to Nick Cage, but the films were just not good.

The show? Overall the episode was action packed and picked up nicely from where season 3 left off. We didn’t expect to be treated to GR very soon, but it was great. Also, the current team dynamic was what you’d expect after their shakeup especially with May, Coulson and Simmons. It’s also nice to hear mention of Ultron when it came to the development of AIDA which really needed to address the perils of AI, but as Radcliffe explained, AIDA is simulated intelligence, not artificial. SHIELD won’t be complete without some secrets. We know that Daisy is secretly not out of the loop. The new director has a secret agenda for the team, and Fitz is forced to keep a secret from Simmons. The episode flowed nicely as expected of a season premiere and hopefully the same values continue in upcoming episodes.