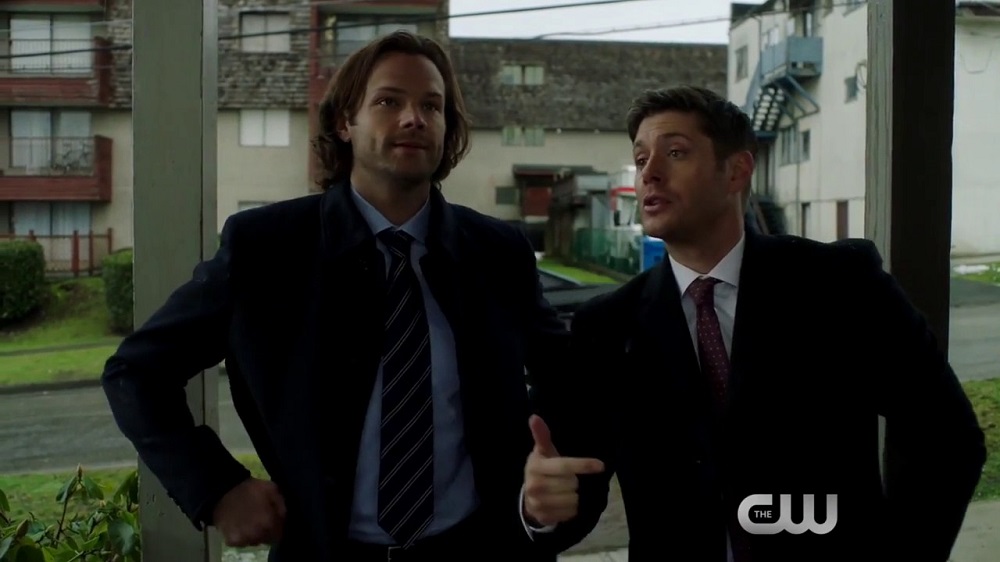 Last week’s episode of Supernatural had something that never fails to make me a very happy fan indeed:  The Winchesters listening to each other and trusting each other and telling each other the truth. THANK YOU, SHOW! (And writer Davy Perez). That alone is enough to make a good episode imho. But actually, there was one more thing that will always make me happy – Winchesters in glasses. Is it hot in here?

So let’s talk about what I liked first, and then I’ll get to the things that didn’t quite work for me. I really really loved that last conversation between Sam and Dean, where Sam comes clean about working with the BMoL and Dean, instead of flying off the handle and feeling threatened and betrayed and thus shutting down, instead hears Sam out and they come to an agreement. Dean isn’t anywhere near trusting them – and I don’t think Sam is either – but the brothers are on the same page about cautiously taking what they can from the BMoL while still retaining their independence as hunters. How easy that will be I’m not at all sure, but the important thing is that the brothers are together in the decision. I don’t know if I’ve ever loved Sam more than when he steeled himself and told his brother the truth.

Sam: Either way, I shouldn’t have lied to you, and I’m sorry, man.

Dean: (not walking away or even looking away) Well, okay. What do you want me to say? Do I like it? No. Do I trust them? Hell no. But you’re right.

And Sam, in return, waits to pick up the next call from the BMoL until Dean gives him the go ahead.

That conversation, and its upshot, are emblematic of where the brothers are this season. It’s because Dean feels some sense of security in his relationship with his brother that he’s able to not run away or panic, as he would have in other seasons. He knows Sam isn’t going anywhere; as much as he told Sam to pick a side, I think he knows that Sam will always choose Dean. In fact, Dean’s comfort with telling Sam to pick a side in the first place is indicative of that sense of security. And I LOVE that. With all they’ve been through, I hope they know what we as viewers know – they will always pick each other.

I loved their brotherly banter throughout the episode too, from Sam’s disgust over Dean’s post-hunt skeeviness to knowing how many boxers Dean brought and just how dirty they are, inside out or not, to their playful jostling over whether to tell Gwen the truth about what happened.

Dean: Trying to make you feel better. It was his idea.

I will never not love a glimpse of domestic Winchesters, so Dean threatening to use the fancy shampoo that Sam (tries to) keep hidden from him was much appreciated. And Dean not wanting to let Sam drive, that was a nice piece of continuity, hearkening back over all twelve seasons.

I also loved Crowley’s arc in this episode. I may have leaped up off my sofa when he ended up outsmarting Lucifer after all – in part because go Crowley and in part because I love love love when Show can still surprise me! Mark Pellegrino and Mark Sheppard remain absolutely delicious together, every scene crackling. Including Lucifer in a bridle, which necessitated his comment of ‘kinky.’ I mean, what else could he say?

I also love that Crowley’s relationship with the Winchesters and Castiel continues to evolve. Dean and Crowley teaming up again (shades of their epic bromance a few seasons back!) was wonderful – pretty sure Crowley thought Dean looked as hot in those hellhound glasses as the rest of us did. Their conversation was just the right amount of snark and ribbing.

Dean: Maybe I’ve rubbed off on you.

Crowley: Maybe I’ve rubbed off all over you.

Not entirely the same thing, Crowley. I may have laughed out loud.

But there’s also truth underneath – and Dean’s thank you for saving Cas was clearly heartfelt, even if Dean himself is still too smart to entirely trust the King of Hell. And then we get Sam’s thank you to Crowley too, with the brothers once again on the same page. This was a big move forward in Crowley’s story – but of course, Sam and Dean don’t know that Crowley isn’t telling them that Lucifer isn’t actually in the cage.  Or that he has ‘big plans’ for the imprisoned-in-his-lovely-Mark-Pellegrino-vessel Lucifer. What are you up to, Crowley? I can’t wait to find out!

I also liked the guest stars, including Kelvin the angel (Nathan Mitchell) teaming up with Cas (though he needs some coaching on how to pronounce Castiel). Castiel’s  story arc also took a surprising turn in this episode, as Kelvin urges him to come back ‘home.’ To Heaven. He makes a compelling case, and Cas makes the surprising decision to go hear Joshua out – without telling the Winchesters. I feel for Cas, never truly at home, always feeling like an outsider no matter how often the Winchesters assure him that he’s family. I don’t blame him for wanting to hear Heaven out, but I also don’t trust the angels, not even one who seems nice enough like Kelvin.

I loved the character of Gwen (Angelique Rivera, who did a great job), an obvious parallel for Sam – smart, courageous, determined – so that when she talked about lying to the person she’s closest to, both Sam and the viewers knew that this was a parallel for Sam and Dean.

Gwen: Why couldn’t I just tell him the truth? But I didn’t. I lied to make things easier.

We find out in the last scene that Sam heard her – and stopped lying to his brother.

I particularly loved that she kicked the Winchesters out of her house when they insulted her intelligence by trying to tell her that Marcus was killed by a bear. Their “you’ve been through a lot, sometimes the mind plays tricks on you…’ sounded way too much like ‘stop being a hysterical female,’ and I loved that she wasn’t having it. Kudos, Davy!

Other things I liked?  Dean’s small soft smile when koalas are mentioned. I’m guessing that was Jensen, and I loved it. Gifs please, fandom!

The final showdown with the renegade hellhound was beautifully filmed by Serge Ladouceur and directed by Nina Lopez-Corrado, who did the hellhounds justice throughout the episode. They could so easily be cheesy, but Nina never lets that happen. She did a fabulous job of amping up the suspense every time we saw things through ‘hellhound vision’, especially as Sam and Dean meet with Gwen and Ramsey is watching the whole thing. I had goosebumps! Seeing the hellhound through the lens of Sam’s glasses on the ground was brilliant! And I love that Gwen saved Sam using the iconic green cooler and that Sam ended up killing the hellhound blind. We’re getting a lot of Sam F—king Winchester this season!

I didn’t love everything about the episode, though the quibbles are pretty minor. As much as I enjoyed Sam ribbing Dean about needing a shower, Dean is usually more of a neat freak, and he hates having ‘fluids’ all over him. I’m not sure he would have been so blasé about being covered in monster guts, or so gleeful about it, let alone flicking it all over the room. I guess maybe he just wanted to gross Sam out, but it didn’t seem entirely Dean. And while I usually love love love the meta episodes, I think I love them more when they’re just that – episodes. This episode infused some in-jokes and meta comments throughout, which sometimes jarred me. Give me an entire meta episode ala Robbie Thompson, and I’ll eat it up with a spoon, Show!

I mean, don’t get me wrong, I love The Walking Dead crossover as Dean comes in swinging Lucille – and commenting that his dad loved it –  perfect shout out to Jeffrey Dean Morgan. But it did throw me out of the story for a minute.

And were the Queen of England references a GISHWHES shout out to Misha??

Also, I don’t understand why Sam keeps giving the BMoL so much credit. THEY killed the Alpha Vamp? Umm Sam, pretty sure that was YOU!  Unless he just wanted to convince Dean to work with them, but I’d really like to see someone give Sam the credit he deserves for saving the day like that. Including Sam himself!

So where is the Colt now? Does Dean know it’s back in play? What will Cas decide about Heaven, and what does it want with him? What are Crowley’s big plans for Lucifer, and how will they affect the rest of the world? And who are the ‘old men’ pulling the BMoL’s strings?? So many questions going forward, but with Supernatural, that’s usually a good thing.

The episode was aptly titled, and I think implies more than we know right now – where is Heaven in this big board game? And where is hell, with Crowley once again truly in power and able to make changes. Are the BMoL aligned with either, or a separate force to be reckoned with?

That leaves the Winchesters perhaps truly between Heaven and Hell. And, if Supernatural plays out as it always has, the only ones who can save the poor humans caught in the crossfire.