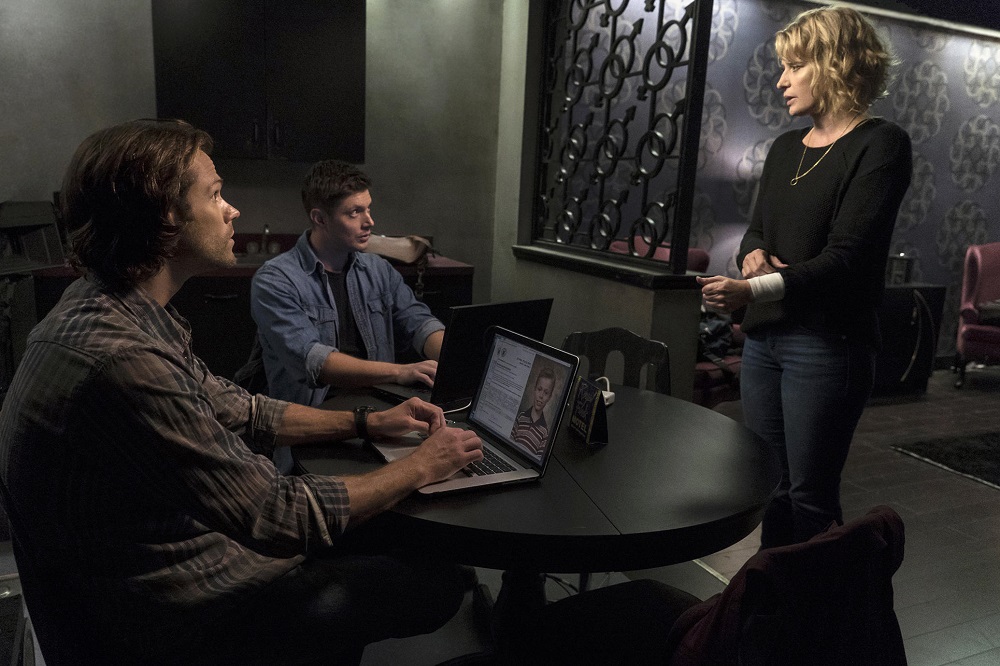 This episode of Supernatural was entertaining; it had its heart-wrenching moments, its laughs, and some good old-fashioned vampire beheading. It was very nice to be reminded how Supernatural started – I’m talking about the scene in the “then” with Sam and Dean looking so young and so baby-faced!

Raid starts pretty much right where “Family Feud” ended – with Sam, Dean and Mary in the bunker after Mary drops the bomb that she’s been working with the British Men of Letters. This scene had the most dramatic – and heart-wrenching – moments, to me, at least. Mary pleads her case with the boys, trying to explain why she’s been working with the BMOL – the organization responsible for torturing Sam and Dean.

It’s been interesting trying to get into Mary’s headspace. I know that Mary has been the target of a lot of hate lately, and many fans are wondering where her storyline is going. I won’t pretend that I know exactly the reasoning, but I do think Mary is looking at the bigger picture. The last thing she wants is for her boys to continue hunting until they die; she wants them to have a “better life.” (Honestly, we all know that won’t happen, otherwise what would happen to our beloved show?) She figures that working with the BMOL will help get a handle on all the monsters in the States, so that Sam and Dean won’t have to road trip from coast to coast, killing things.

This episode was very Sam-centric; I’m guessing this is because Jensen was on baby watch, waiting for the twins. Jared’s acting in this episode was, as usual, spot on – and Jensen’s few scenes were excellent as well.

I’ve written before about how excellent our boys are at acting with facial expressions alone. There was a perfect example of this in the first scene in the bunker – Mary asks for the boys to listen, and give her a chance, and Sam’s eyebrow raise expresses his thoughts explicitly – no matter what, he’ll listen, especially to his mom.

Some of my favorite lines from this episode are in this scene. Sam’s “When?” portrayed betrayal, hurt and surprise all in one little word … and when Mary explains that she sees the dead hunter Wally when she sleeps at night – Dean’s one-word answer: “Good.” Don’t know about you, but that gave me shivers. We’re used to Dean being nasty, but to his mom? You know things have gone off the rails when …

The next scene of interest (to me, at least) was Mary getting out of the van with Mr. Ketch. Mary looked like a cat burglar in her all black outfit, didn’t she? And Mr. Ketch’s line with Serena? “I have three PhDs.” “And we’re all very proud of you, luv.” That one definitely made me giggle.

Speaking of Mr. Ketch, I have to mention what a wonderful actor David Haydn-Jones is. I definitely started out disliking his character, way back when we thought he was going to be involved in the torture of Sam. But honestly, I’m starting to really like the sociopath. He’s very gentlemanlike, and he’s got some pretty spiffy clothes.

One thing I wanted to mention was the text messages that Mary was sending Dean – specifically, “I’m sorry you had to find out like this.” Was it not Mary’s choice to tell Sam and Dean about working for the BMOL? It’s not like they found out on their own – I almost think she really meant to say … “I’m sorry you had to find out …” I think, if she could’ve gotten away with not telling Sam and Dean about working with the BMOL, she would have …

Back to the bunker scene with Mary, Sam and Dean. Again, some awesome lines, that just about broke my heart.

And that’s what it comes down to – Sam and Dean never had a mother figure growing up – so when Mary is back in their lives, they have all these expectations of her – that she’ll always make the right decisions, and that she’ll always have their backs. Well, lying to them sure doesn’t sound like she has their backs, but as I mentioned above, she’s looking at the big picture. At least in my opinion.

Two other lines from this scene got to me. Dean calling Mary, well, Mary, instead of mom, and Sam telling Mary, “You should go.” Both Jared and Jensen did such an exquisite job of looking hurt and betrayed in this scene … wonderful acting.

Back to the BMOL’s compound – Ketch and Davies are discussing how the “old men” – the leaders back in London – want not just Mary, but Sam and Dean as well, because apparently, they believe the American hunters will follow Sam and Dean.

I’m wondering if we’re missing something here. We know that Garth had taken over Bobby’s hunter help line – perhaps Sam and Dean are being called in still to help out? Because last I had heard, the American hunters really aren’t too fond of Sam and Dean. However, in Celebrating the Life of Asa Fox, where we meet a whole bunch of American hunters, the boys seem like almost idols to some … hmm.

The next scene has Sam and Dean discussing a potential (not really) hunt – and Dean accusing Sam of being a peacemaker, of never really choosing one side or another. That’s really Sam’s personality though – if he can calm troubled waters, he will. But I can totally see how Dean would be frustrated with it.

Dean runs off for a drink (we won’t mention that it’s supposed to be morning) and Sam goes to meet Mary at the BMOL’s compound – also “out for a walk.” Mary has decided that Sam needs to see what’s going on with the BMOL, and how the world is changing. Does anyone else think that Mary’s room looks like a brighter, cleaner version of Neo’s room in the Matrix? Just something that I noticed.

One line that stuck out in the previous scene was this – “I chose this life.” Way back when, Sam always felt forced to be in the hunter life – which was why he went to college in the first place. It’s becoming more and more apparent that Sam is content with the life he is living … this is a good thing.

Back in the compound, Mary – and Davies – give Sam the spiel of ridding the entire States of vampires – which does, indeed, impress Sam.  I wonder how many TVs are in that compound? The set designers did a really good job on this one – with the shipping containers, it makes this building very believable.

Lucy! Come on, that line had to have given you a giggle – it sure did, for me. And this next scene, where we delve into the psyche of a killer … of Ketch, and of Dean. Dean never denies being is a murderer – never denies that he enjoys hunting, tracking, and gutting, as put in the words of Mr. Ketch. It makes me wonder where this storyline is going …. I’m still curious as to what Scotch they are drinking, though.

When Ketch mentions that he’s out vampire hunting, Dean gets interested … who doesn’t like a little beheading with their Scotch?

At the BMOL compound, the vampires are attacking … I suppose Alpha Vampire – played by the awesome Rick Worthy – didn’t take the BMOL’s killing of his children too kindly. In fact, he has another one of my favorite lines from this episode … “Get off my lawn!”

We get to see the Colt again when Sam asks for something to kill the alpha. And I find it very, very interesting that Mary knows Bobby Singer … perhaps there’s more than meets the eye, there …? Of course, our Sam shows off his smartness by rattling off the recipe for bullets that will work in the Colt … and we’re off to the races. Or are we?

Pierce, the Hunter King of Baton Rouge, ends up being a traitor and lets the Alpha Vampire in. One thing I’ve noticed in latter episodes is the use of flashbacks from the same episode. We see this twice in The Raid – once, showing how Pierce got the drop on Mary and the second time when Davies runs into Sam, handily passing him the bullet for the Colt. I think it’s a very good way of showing the audience what happened, without giving up the element of surprise at first.

Jared Padalecki’s facial expressions are to die for. And that smirk when the Alpha Vampire says the Colt doesn’t have any bullets? My goodness …

The slow motion bullet from the Colt into poor Rick Worthy’s head was unbelievable filmmaking. I mean, it’s the Colt, of course, it has to be in slow motion! We say goodbye to the Alpha Vampire (Or do we? This is Supernatural, after all …) who leaves us with a, “Clever, clever boy …” and cut to the exterior of the compound, where Sam, Dean and Mary are talking. And a very, very, shiny Baby. (I wonder how many times that car gets polished?)

It’s obvious that Dean has at least, somewhat, forgiven Mary for taking up with the BMOL – as he’s back to calling her mom. And Sam has decided to throw in his lot with the BMOL as well … because they are “changing the world.” It’s been mentioned – and I somewhat agree – that Sam is agreeing to taking up with the BMOL because he wants to keep an eye not only on the Brits, but on Mary as well – you know what they say, keep your friends close, and your enemies closer …

It all comes back to that line in First Blood … “Let me tell you about a world without monsters or demons …” Mary and Sam are on board; now they just need to convince Dean. Either way, I’m looking forward to watching!