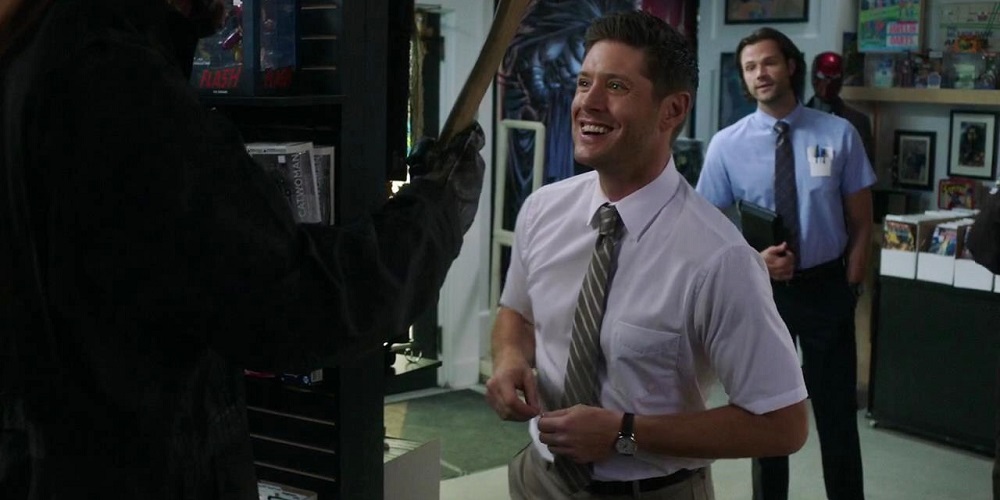 Here’s the thing, I didn’t review the Supernatural episode 14.03 “The Scar,” and this is why: when I review an episode I watch it a minimum of two times, but that episode I technically watched less than once. I missed the very beginning when it aired live and basically watched the rest with one ear and one eye. Then when I went to rewatch it and take it in… I couldn’t. I legitimately got less than ten minutes in. I simply could not suffer through it and turned it off. It was a passive aggressive mess of an episode, it was a temper tantrum. And that’s literally the extent of the time of day I’m going to give that episode.

Now, here’s another thing: I love Halloween and horror movies. To say I was excited for an episode of Supernatural with a Halloween/horror movie theme and something that was leaving the mytharc behind to get back to the bread and butter of the show is an understatement. Thankfully, episode 14.04 “Mint Condition” didn’t just live up to expectations; it exceeded it. 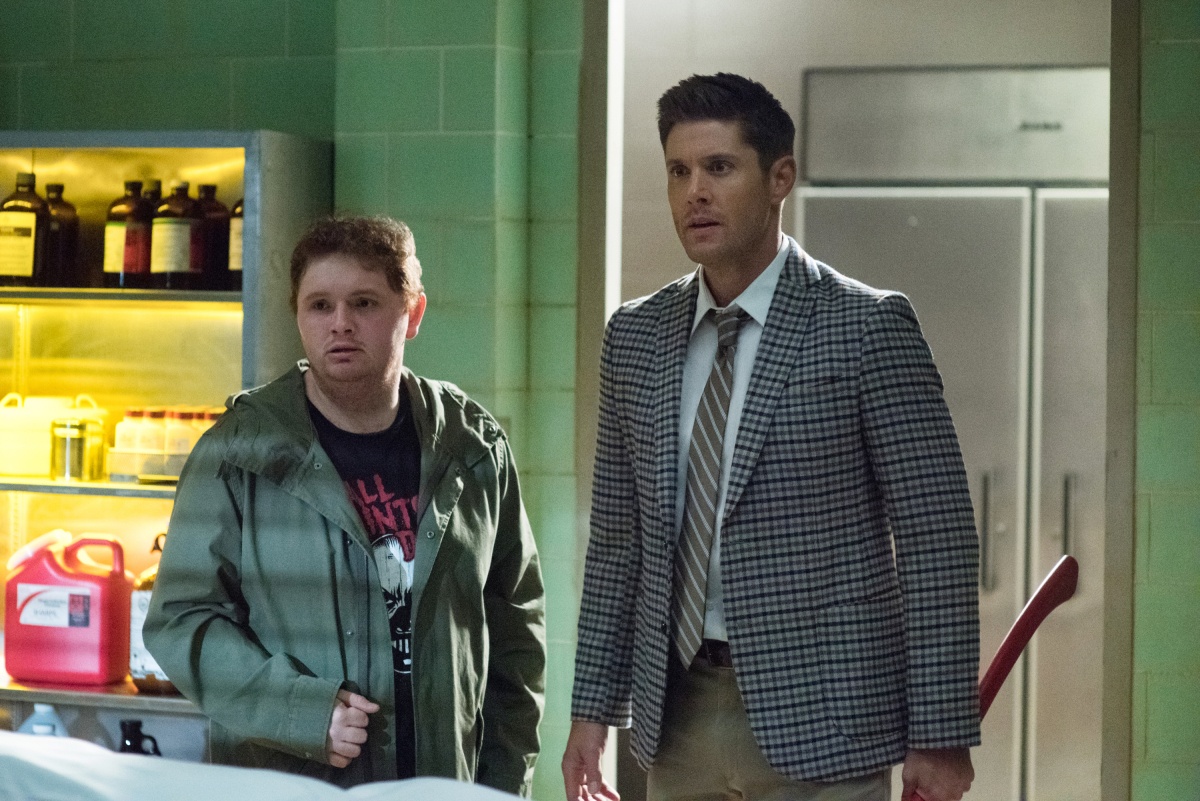 We start the episode with an old-fashioned introduction to our victim; meet Stuart, the geek shop store clerk. We quickly learn that Stuart is a thief, a real dick in a trench coat. Within three minutes we watch him steal a brand new Panthro action figure and learn from his co-worker, Samantha, that he was belligerent to a customer. We also listen to him berate a pizza place into giving him his pizza for free. Dude is a real peach.

On the plus side, the Panthro toy he jacked totally kicks his ass. Karma, man.

Over in the bunker Dean hibernating in his room, pizza boxes strewn around and a horror movie marathon on Shocker Television, which seems to be a nod to both the now defunct Chiller channel and Shudder TV streaming service. We quickly learn the scene is deceptively relaxed; Dean isn’t really lounging, he’s hiding. We get a recap of the past few episodes and to be honest, man do I not care about Castiel and Jack’s great adventure, Dark Kaia and her baggage, or Michael’s monsters. It unfortunate that the writers feel that we have to be handheld every episode, that we can’t fill in the gaps on our own or that we may not remember what happened 6-26 days prior. I don’t blame this episode’s writer, Davy Perez, for this, I blame the executive producers for the lack of faith in the audience. Even someone like me, who completely zoned out multiple times during the previous episode, didn’t need the Readers’ Digest version.

This scene also marks the end of Sam’s Grief Beard, and while the rest of us mourn it Dean is stoked to see Sam’s face again, calling it, quote, “smooth as a dolphin’s belleh,” but the reality is it’s more than that to Dean, it’s Sam being able to care for himself again now that Dean is home. Now that he’s clean shaven, Sam’s next move is to coax Dean out of his funk, and what better than a possessed toy and the threat of handling it with one of the strangers that have infiltrated their home? Dean is so not having that… just like Sam predicted judging by his little smirk as Dean rushes to get ready for this case. 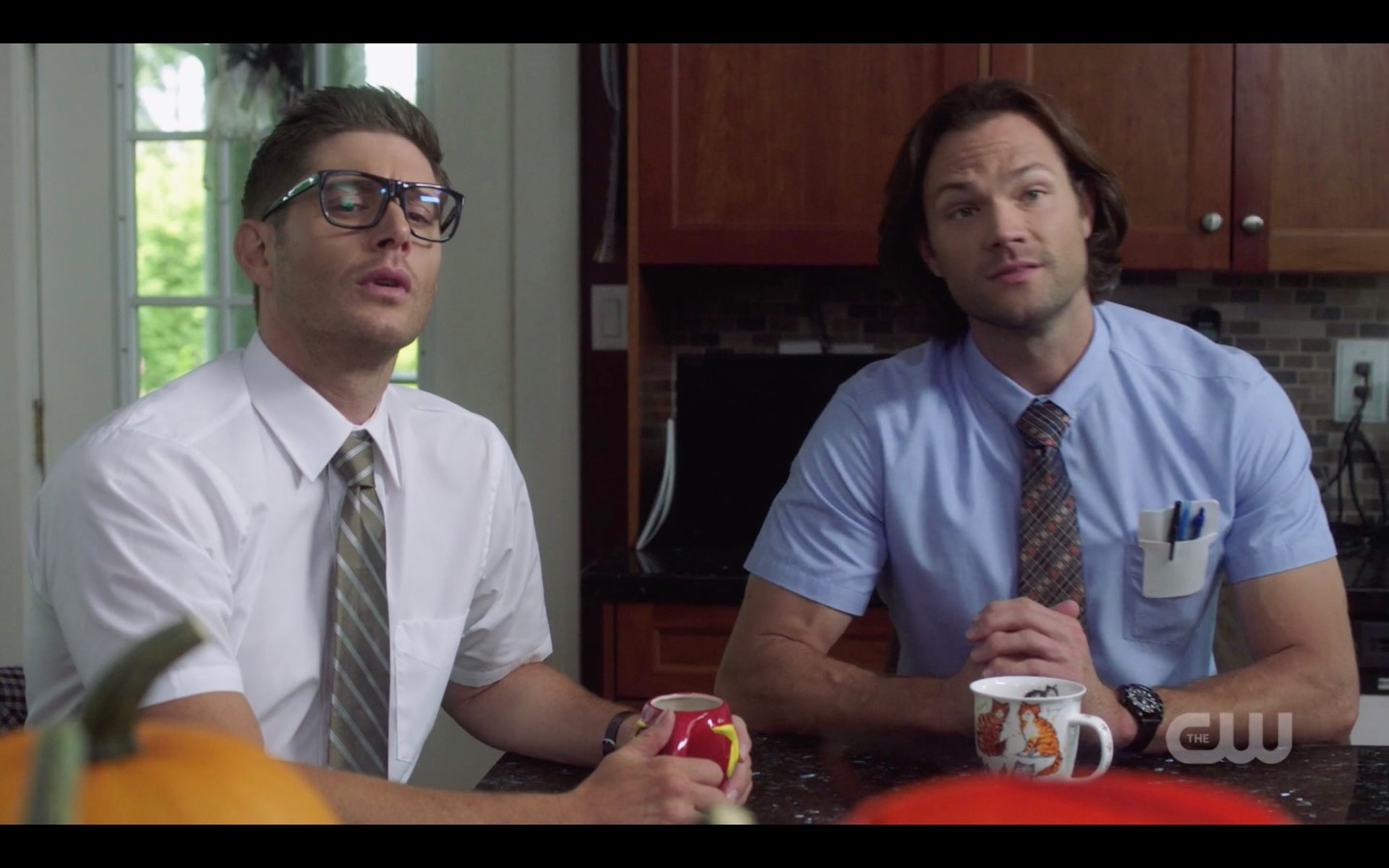 I often complain about the overused FBI cover the boys use, and I get it, they can’t really pass themselves off as local LEOs or anything like that, but I really enjoy when the writers think outside the law enforcement box and have the brothers use a guise that’s off the beaten path. This episode gave us nerdy insurance representatives, complete with khakis and short sleeved button downs. Granted, the khakis and shirts were perfectly tailored, but I refuse to nitpick or complain about that. 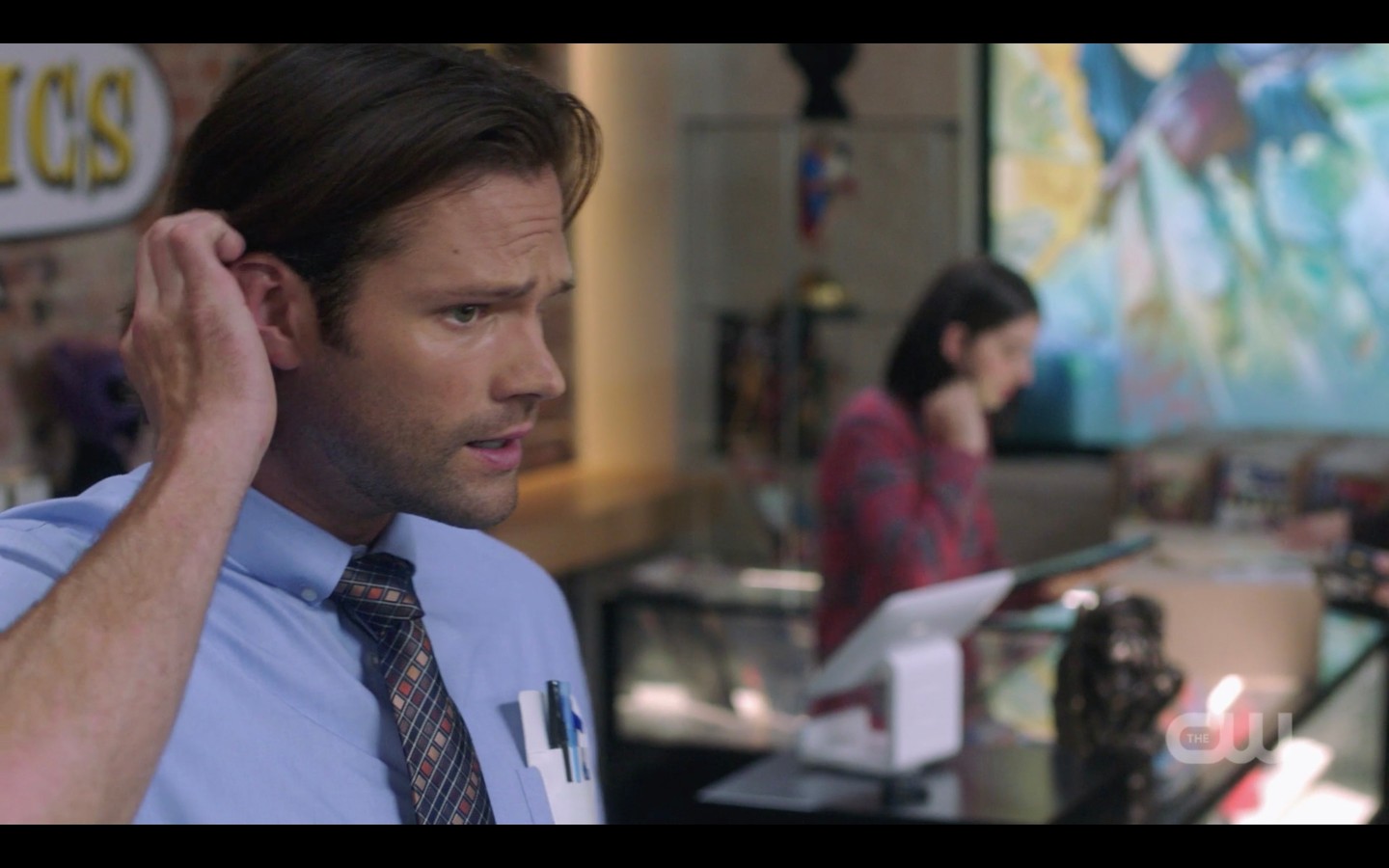 At the Smash Pow Comics novelty geek shop we see Samantha again, this time behind the counter. Dean does a bit of a double take and points out that Samantha could be Sam’s twin, what with the delicate features and luxurious hair. Sam scoffs, never realizing that he and Samantha were mirroring each other, and points out that the other employee, Dirk, is practically Dean’s personality doppelgänger. Dean doesn’t see it, but between the matching lollipops and the gleeful geek out over the life-size, talking David Jaeger replica we, the audience, definitely do.

Sam and Dean learn that Stuart was kicked out when he and his roommate got into a fight over whether a dubbed version of an anime was better than the original and that he’s really a run of the mill internet troll by nature. They head to his mom’s house, where he’s now living, and try to question him. Not only is Stuart in the middle of a Fortnite rage quit, but we also learn that he’s stereotypically socially awkward and prone to lying. Sam and Dean just want to get to the bottom of the problem, but Stuart is shifty and shuts them down.

If Samantha is Sam and Dirk is Dean, well, Stuart and his trench coat… seem familiar, too.

The brothers opt to stake out the house, and while they kill time, Sam checks in with Riley. Dean’s response to that is, “I don’t know who Riley is,” and honestly? Same, Dean. Dean tries to find out why Sam hates Halloween, but Sam notices Stuart’s mom is leaving the house and uses that to deflect. Meanwhile, we are treated to a great moment of Sam and Dean slowly leaning out of view while in the Impala. When we were watching this episode live, I was positive that moment wasn’t scripted and I was right.

The cuteness is cut short when Stuart comes stumbling out of the house bloody. Sam tends to him while Dean investigates and nearly gets his own guts ripped out by a flying chainsaw that wedges itself right into a Texas Chainsaw Massacre poster. Nice nod to a classic.

At this point the episode does the good ol’ split the brothers up to hang out with their counterparts. Dean stays at the hospital and bonds with Dirk over the All Saints Day franchise while Sam heads to Smash Pow to question Samantha and it all starts coming together; Smash Pow was owned by Jordan, who passed away and left it to Samantha and Dirk. Jordan had also repeatedly fired Stuart for stealing, but Samantha hired him back, something Jordan’s ghost clearly isn’t keen on.

It would be easy to be annoyed that Sam and Dean just got back together only to spend a good chunk of this episode separated, but like most really great Supernatural episodes such as All Hell Breaks Loose: Part 1, Time After Time, or Red Meat, the separation actually serves the brothers and their story really well. We see geeky Dean and nerdy Sam in their elements, and we see that come together, without them having to do much communication, to defeat the ghost with the help of their counterparts. Gotta love when an episode stays true to the characters and gives us great parallels.

Speaking of staying true to the characters, this episode touches on something that I think we’ve lost in the past few years that was widely out of character for both brothers. See, the thing is, Dean was the anti-social weirdo and Sam was the socialized one, but somehow, around season 7 or 8, Dean became the one to understand references and assimilate while Sam became the out of touch one who couldn’t connect to people. Dean when from not knowing what MySpace was to trolling dating sites, while Sam went from having friends to having almost no one. I’m not saying Dean can’t evolve, but when one evolves, and the other regresses it’s just off-putting. This episode gave us a good balance while maintaining core characterizations; Dean was able to relate to Dirk, similarly to relating to characters like Lucas (“Dead in the Water”) and Michael (“Something Wicked”) and Sam was able to be himself without having to immediately withdraw into himself. 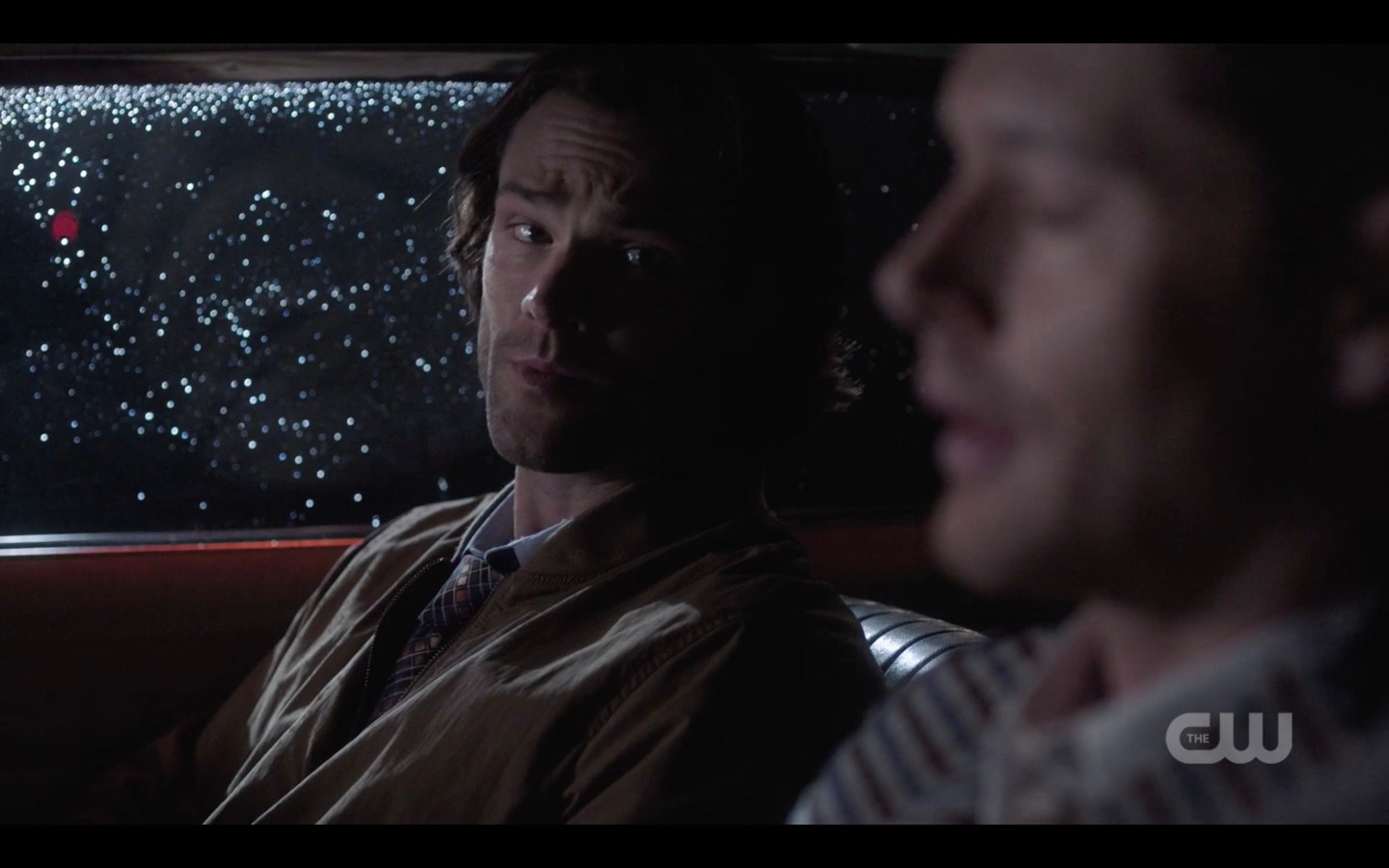 My one nitpick with this episode was the explanation of why Sam hates Halloween. For a boy who’s life began to fall apart on the Day of the Dead, 1983 and did so again on the same day in 2005, the story of him vomiting at a Halloween party in front of his crush in 1995 just rang hollow. This is the downside of having headcanons about the Weechesters; inevitably the writers will create a real canon for something and dash it. So, where Sam could’ve had a moment with Dean where he pointed out that John didn’t let them stray too far between October 31st and November 2nd out of fear or remind Dean that he already had issues with the holiday and then his last good night with Jess ended up being Halloween, instead we got a story that really kinda served to diminish the very first episode of this series.

On the other hand, Sam’s preteen drama ended with Dean consoling him in the woods and, well, I’m a sucker for any time Sam had a rough go of it, and Dean was there to rescue him from himself. I’m a cheap date, what can I say?

Speaking of me being a cheap date, there is nothing I love more than Dean Winchester trying his damnedest to both comfort and mortify his baby brother. His declaration that next Halloween they’re doing matching costumes is on the surface endearingly goofy, but it’s really Dean letting Sam know, once again, that at the end of the day it’s just the two of them against the world, whether they’re superheroes, cartoon animals, puppets, or if they’re just kissing it all goodbye and gunning it off a cliff.

Overall, this episode was what had been missing from Supernatural for years. This was the love letter the fans deserved back in season 10; nods to the boy’s real lives and other projects, reminders of canon meta from the days of yore, great brother moments, perfect parallels, all wrapped up with a growling engine bow. The show missed the boat back in season 10, but I’ll gladly sail it now.