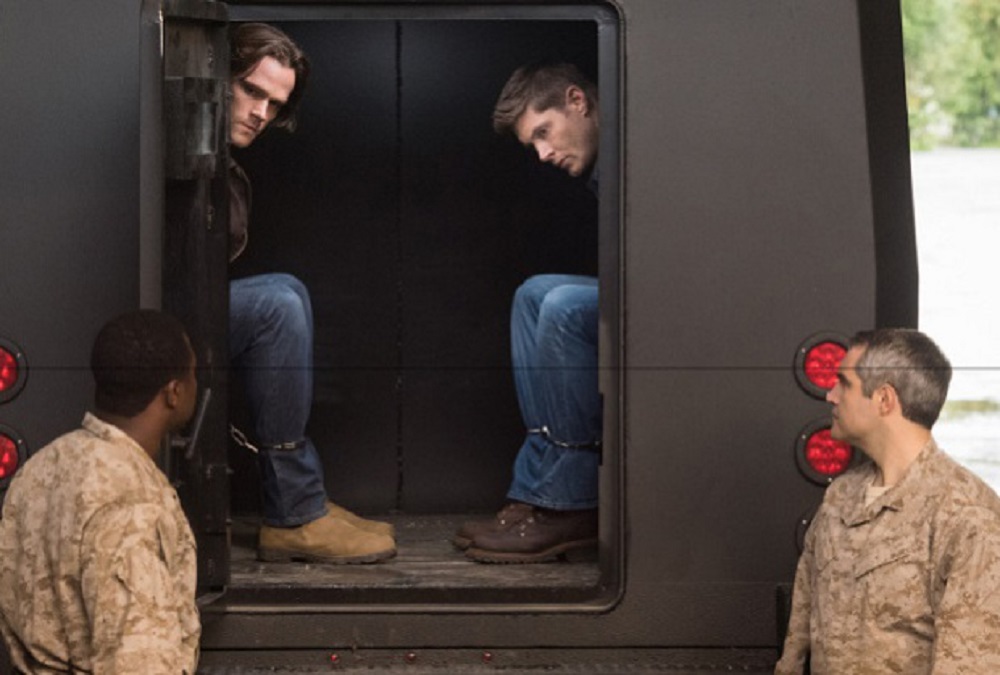 This was one of those Supernatural episodes that didn’t leave anyone shrugging and going eh, it was pretty good – you either loved it or hated it if my timeline is anything to go by. I mostly loved it, but there were some things that were an exception. Let’s cover them first, shall we? Then I can go back to my happy Winchester place.

The first quarter – that big chunk before the first commercial – was oddly slow. We jump back and forth between the Winchesters being put into solitary confinement, stoic and silent and looking RIDICULOUSLY hot….but wait, that belongs in my happy Winchester place section… 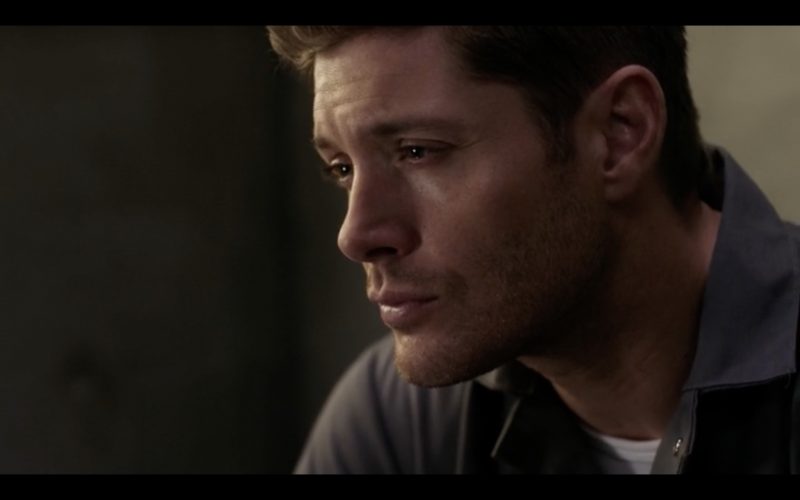 Then back to Mary and Castiel feeling bad about letting the boys get captured in the first place, and then  Mic the Man of Letters trying and failing to recruit American hunters. His soft hands clearly worked against him, as did his insistence that hunters would take orders – which goes against that independence we know hunters value.

I’ve complained before about the lack of a sense of urgency whenever one (or two) of the Winchesters are missing, and once again that seemed strangely muted. Mary and Cas were upset, but not as upset as I would have expected. Especially Mary, who must have felt guilty about leaving and not being there when her boys needed her. Either she’s an expert at rationalization and denial, or we just didn’t get to see what I think we needed to.

Both Mary and Cas cope by going off and hunting, which I guess is a way of “doing what Sam and Dean would want us to do”? Maybe? But honestly it didn’t work for me – I needed to see them leaving no stone unturned as they tried desperately to find Sam and Dean. As much as I loathe the British MoL, that was an option I would have thought they would turn to before six weeks had gone by!  I can understand Crowley going back to his King of Hell ways and claiming not to care, but I wish we’d seen Mary and Cas doing a lot more desperate searching.

I did like the flashback to the boys’ history of run-ins with law enforcement though. Baby!Dean. 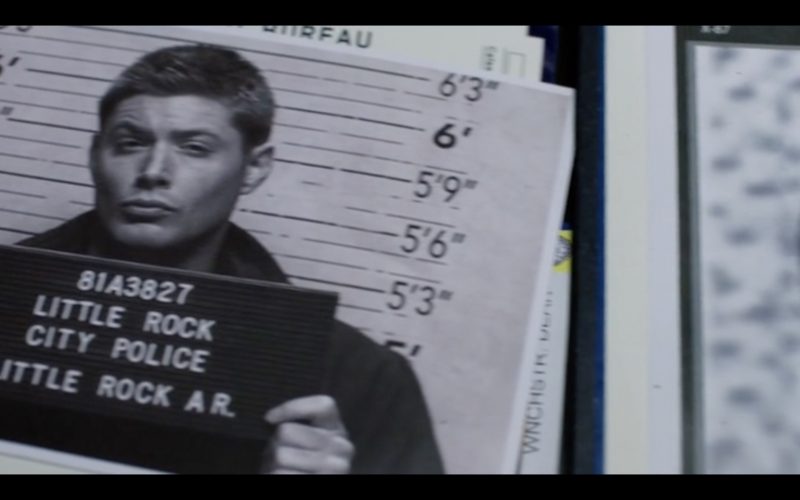 My other major quibble is my continuing confusion about what Cas can and can’t do. He’s an angel – can’t he do anything more than a human?? No powers at all? I was mystified when he just walked out with the Nephilim-carrying woman last episode and didn’t do anything to make sure Sam and Dean weren’t captured, and I was mystified during most of this episode when he remained completely impotent to do anything to help them – until the very last second, when he suddenly remembered how to use an angel blade. Even Misha Collins seemed to be a little unclear about how powered down Cas actually is. A fan at the convention last weekend asked him why Cas had no powers, and he said that he did, just that he couldn’t teleport or time travel. (Then added, ‘don’t pull the thread…’) I’m trying, Misha, but Cas in this episode seemed a helluva lot more powered down than that! 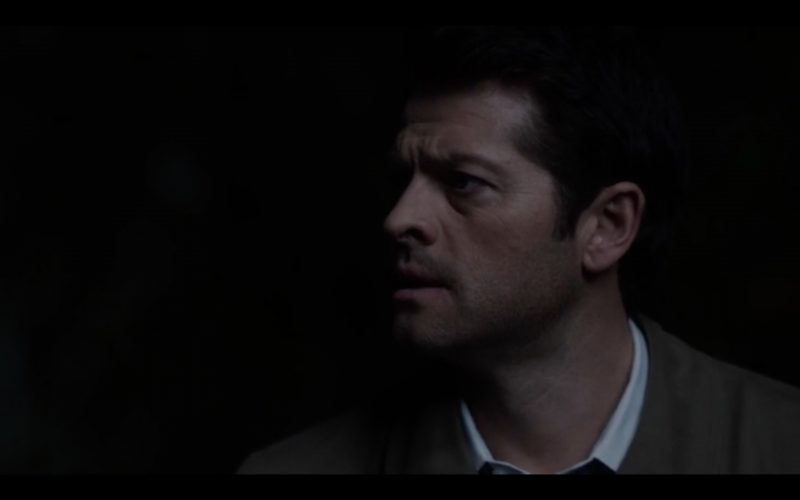 Okay, so I didn’t like those things. But the rest of the episode? Oh, I liked it. A LOT.

There was very little humor in this episode, which is unusual for Supernatural – the only really humorous moment was Castiel’s “This is my voicemail. Make your voice a mail.” Which amused me.

I actually relished an episode that was mostly serious, though. It felt more in line with old school Supernatural in the early seasons when Sam and Dean were almost larger than life – true heroes. At some points over the last eleven years, they have felt a lot less like that, and I realized tonight just how much I value that perception of the Winchesters. I often rage when they’re dumbed down because I need them to be those larger than life heroes. They’re SMART. Smart and capable and dangerous. Those are the Winchesters I fell in love with, and I haven’t seen nearly enough of them recently.

Also? Call it a competency kink if you will, but those particular Winchesters? Are effing HOT.

Sam and Dean in solitary confinement, jumpsuited and restless and a little bit scruffy? Hot.

Dead on slabs in the prison morgue? Still hot. 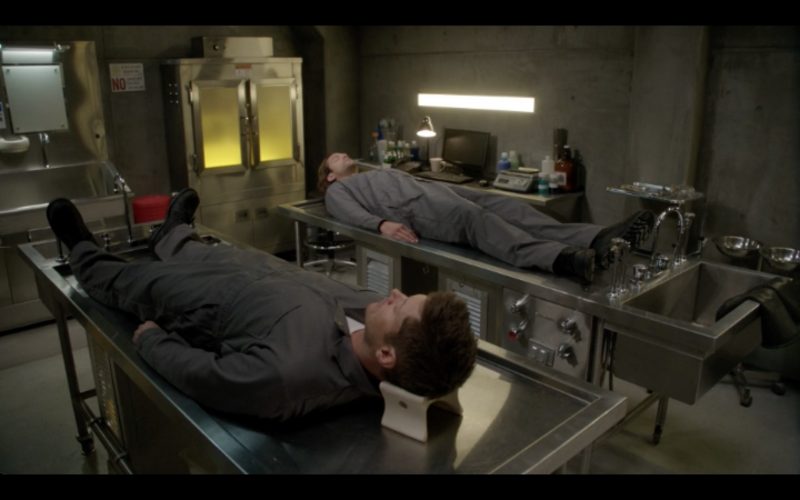 Pulling off an escape from an absolutely inescapable facility and running through the woods wet and dirty? Even hotter.

You get the idea. 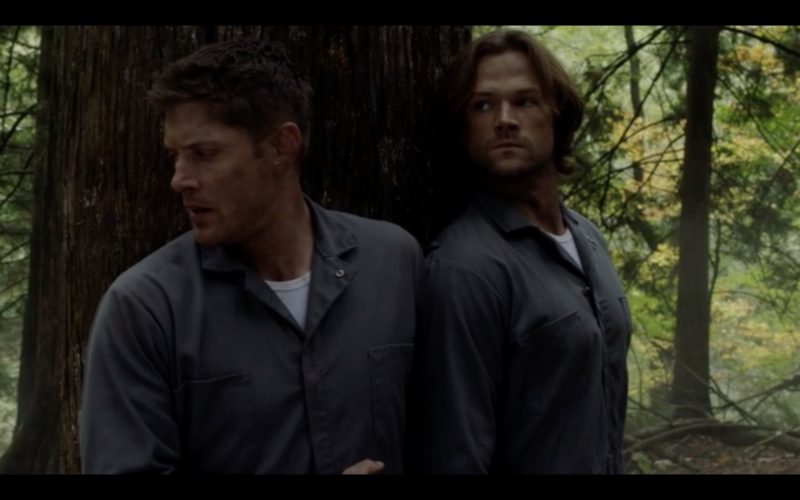 Of course, we knew they weren’t going to stay dead (if they indeed were dead), but I also loved that they, of course, were BOTH dead.

Man who doesn’t understand the Winchesters: “I don’t get it. They both died on the same day? That’s not…”

Sam and Dean? Of course, they did. 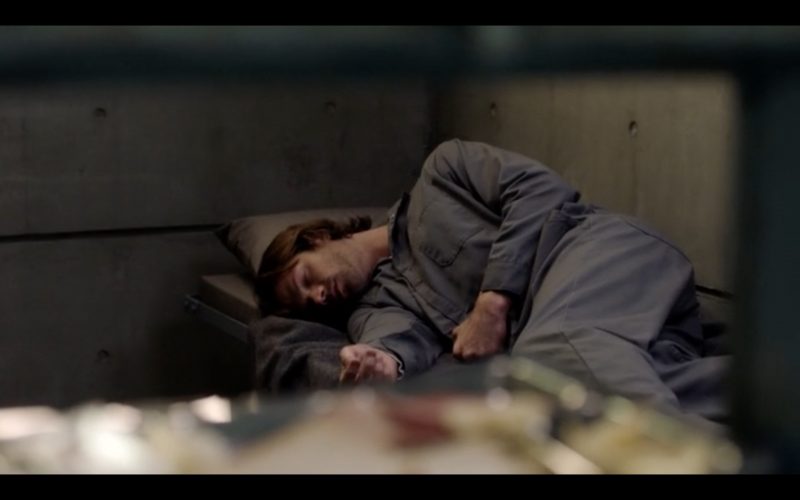 That’s the other thing I loved about this episode. Sam and Dean were 100% in sync throughout the episode. Communicating with a nod or a glance, on the same page without even needing to speak. That was one of the things that so fascinated me about Sam and Dean when I first started watching this show, and I miss it whenever we don’t get to see it. That connection is what makes them who they are, and what makes them such compelling characters.

I loved their cryptic conversation as they flee through the woods – and the fact that they can calculate how long until it’s dark. Because they’re HUNTERS. The BEST hunters. I don’t like Show to forget that!

I nearly lost my shit when I realized that they weren’t dreading nightfall, they were counting on it. Setting up that cabin, the glow of the lamp, using their A plus MacGyver skills to rig up a not-quite-lethal but incapacitating ploy for every one of the guys after them. That competency kink again. 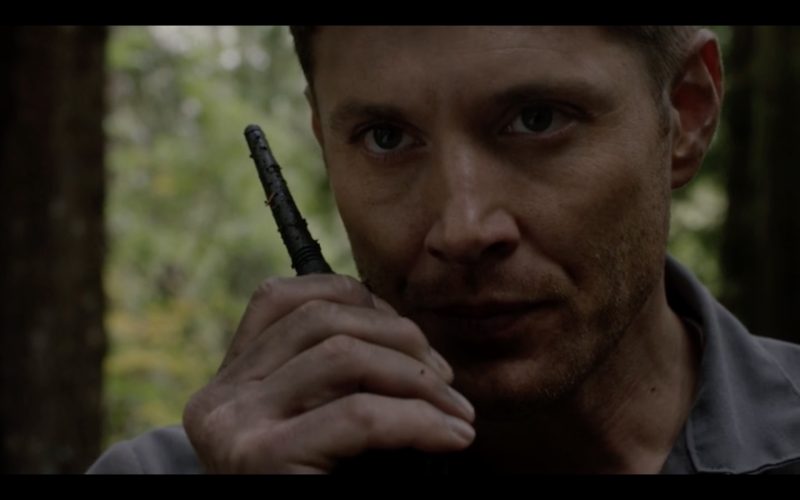 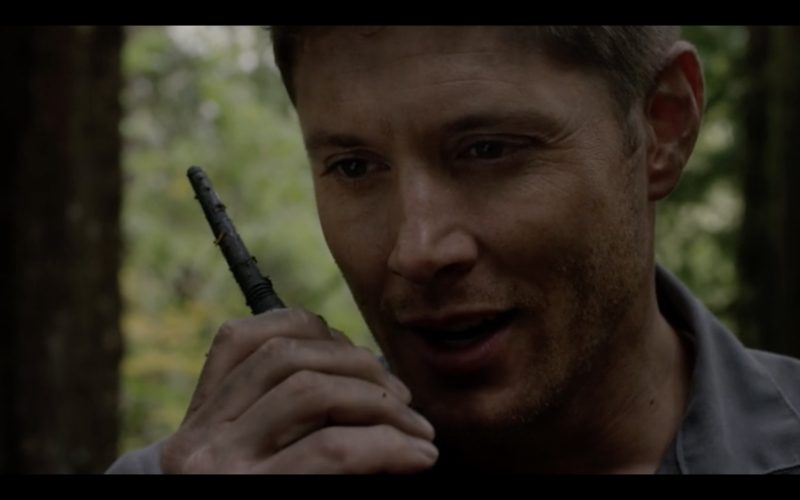 The combination of badass Winchesters kicking ass in the fight and smart Winchesters setting all those traps was almost too much for me, seriously.

The older guy appearing and almost ruining the Winchesters’ escape brought the best moment of the entire episode.

Infuriating guy on the ground: Shoot him!

Fucking Sam Winchester appearing out of nowhere with a rifle to older guy’s head: DON’T. 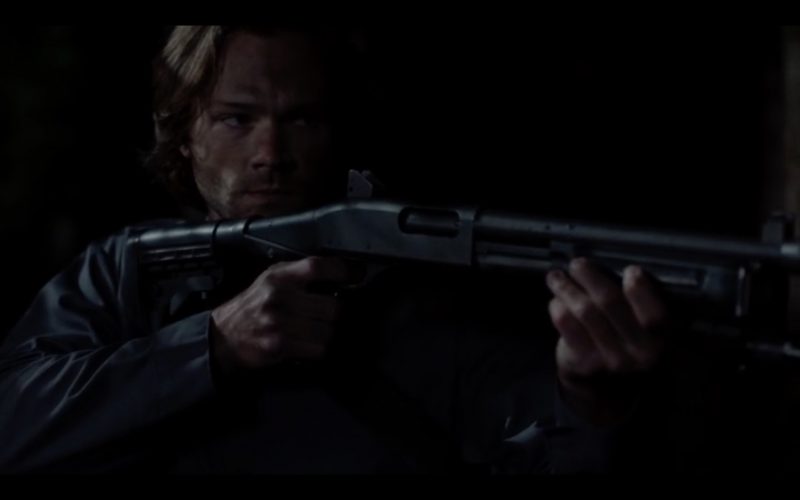 Is it RIDICULOUSLY hot in here??

Sam and Dean share a look, and Sam tells the older guy the truth, knowing he won’t believe it.

“Who are you?” older guy yells as they turn to leave.

“We’re the guys who saved the world.”

HELL YES THEY ARE! Those are my boys, and they’re big damn heroes!

Shoulder to shoulder, Sam and Dean walk away. Despite all odds, they saved themselves. 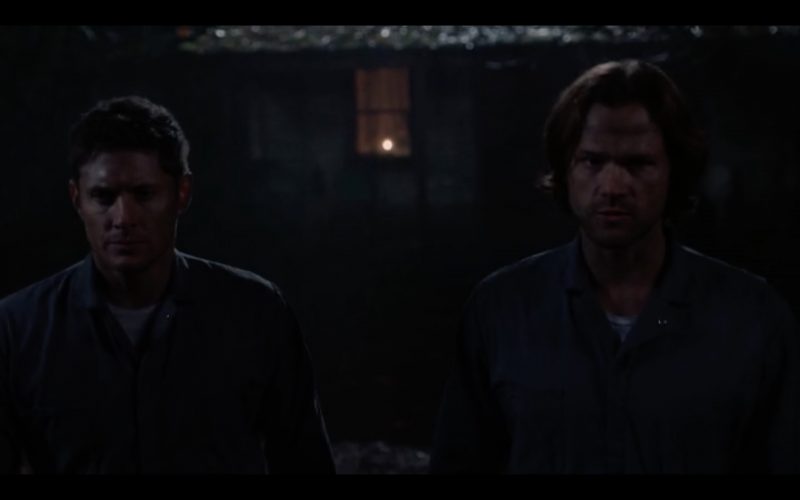 That’s the good part of having Cas powered down, and I get that it was necessary. Look how much I love it when Show lets them save themselves and be the smart, capable heroes they are. I just need a little clarity about what and who Castiel is and what we can expect from now on.

I usually rail when we don’t get a Sam and Dean hug, and after them being separated for 6 weeks, I would have loved even a brief moment of connection in that morgue. On the other hand, they were in very dire circumstances, so I’m not sure they would take time for more than the “you ok?” – which for Winchesters, carries a lot more emotion than it would for the rest of us. They say a lot more with two words – or even with a look – than most of us when they’re talking to each other. So that was okay, even if they did both end up hugging Cas and Mary instead – by then it would have seemed odd for them to hug each other. I think too there was an awkwardness between them, almost an avoidance, because they both knew that one of them was going to have to die – and they each were determined that it would be them.

I’m still enjoying Mary being back, though I know not everyone shares that view. I like her badassery, taking out vamps and driving fast just like her son. I expected her offer of self-sacrifice when Billie appeared (which I thought might happen thanks to the cue in the ‘Then’ montage) and it made sense to me – she’s their mom, it felt right that she made that offer.  That felt a lot more ‘right’ than the early scenes with their lack of urgency. 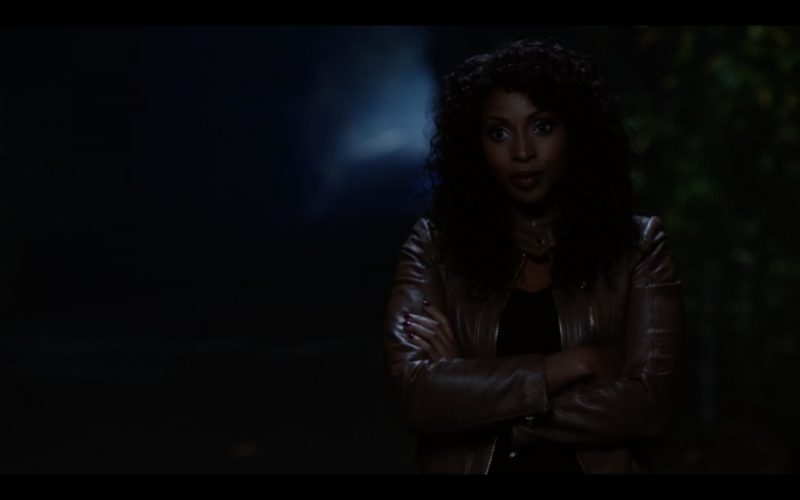 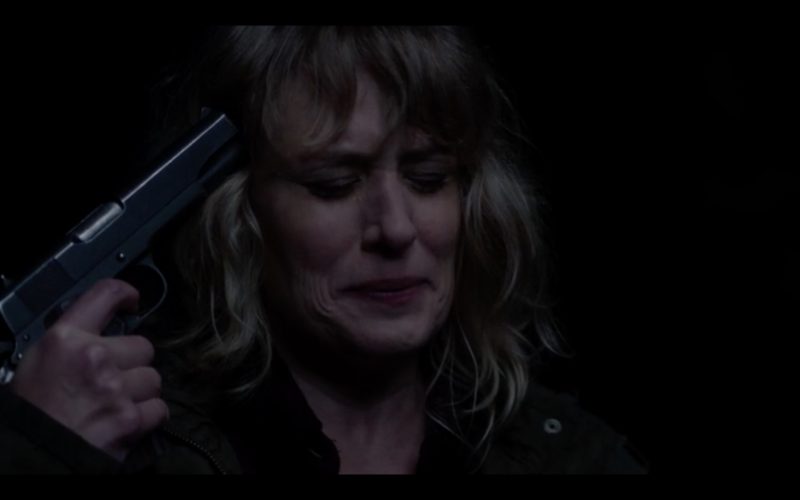 I know the fact that Sam and Dean broke and made a deal didn’t sit well with some fans, and I get why. My favorite flavor of Sam and Dean is ‘Red Meat,’ when one brother will do literally ANYTHING to save the other, including die. And really, I saw this as that same impulse. I’m quite certain both Sam and Dean were set on sacrificing themselves and saving the other one – I have absolutely no doubt, in fact. The problem was that we didn’t get to SEE that. We didn’t get to witness any real emotion between Sam and Dean in the ending scenes, so it didn’t have the same emotional impact as an episode like Red Meat.

There’s also the comparison of 40 years in hell or the cage and not breaking, versus six weeks in solitary confinement and being willing to die to get out – or, more accurately, to get your brother out. But solitary confinement is actually the worst thing you can do to a human. People start to go crazy in an alarmingly short amount of time – we are just not wired to be able to be isolated. And I think the idea of their brother suffering like that and not being able to DO anything to stop it was intolerable to both of them. If it had just been one of them, perhaps they would have endured it.

I didn’t expect Cas to suddenly get a little bit of his badassery back and take out Billie (though I’m sad to see Lisa Berry go) but I liked that twist too. I think he really does care about the Winchesters – all three of them. And he seems to have finally rediscovered some sense of purpose, and the courage that comes with it. 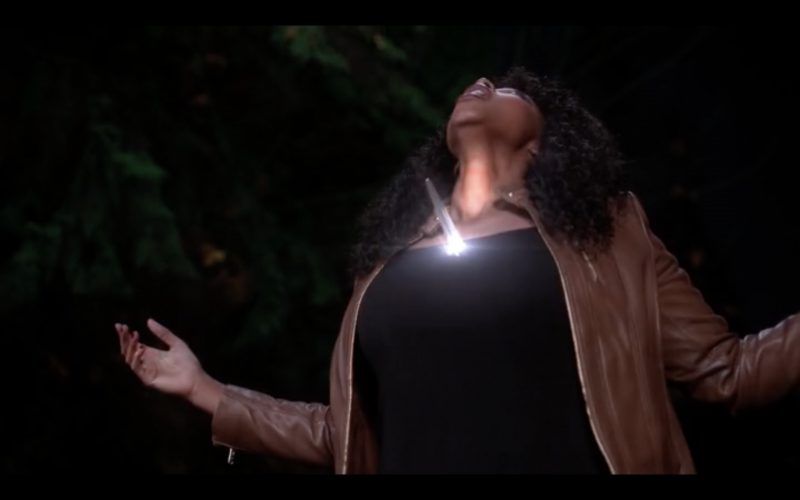 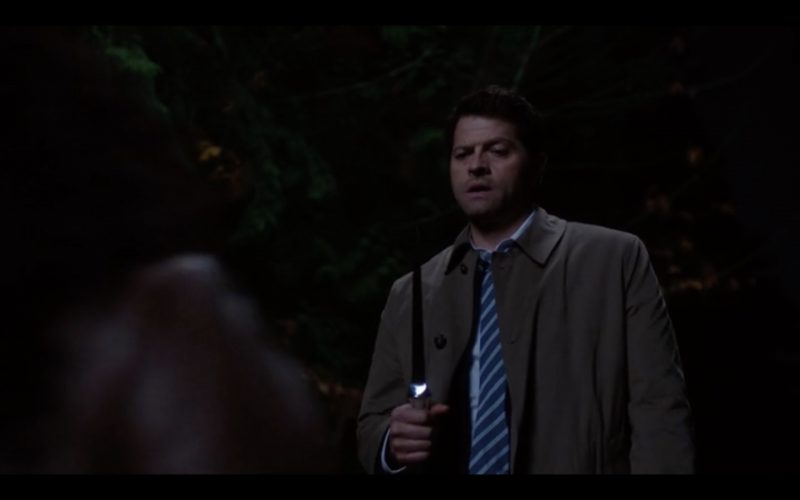 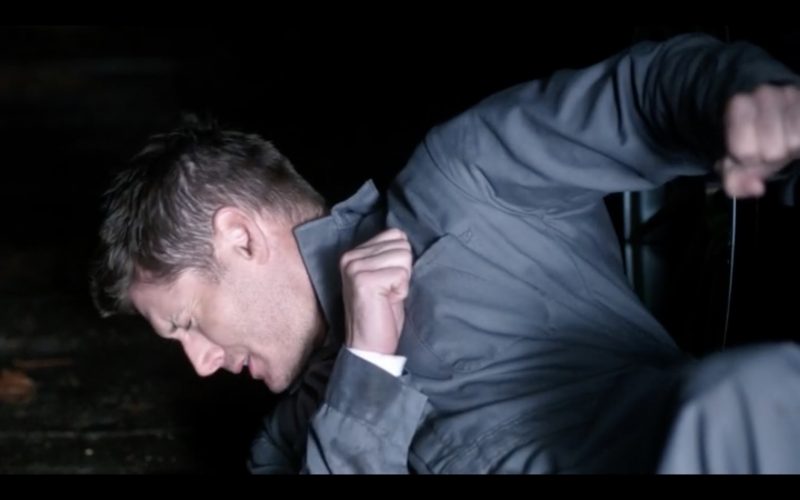 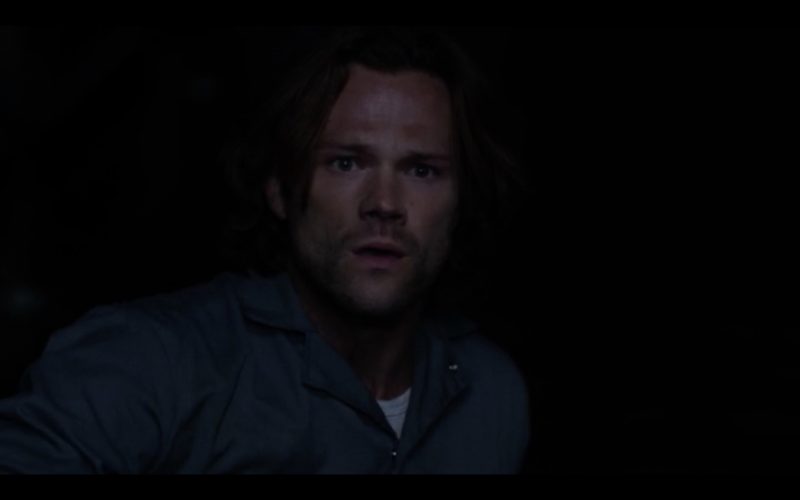 We end with a demonstration of the BMoL’s ruthlessness, and Mary’s sudden capitulation and willingness to hear them out. After what they did to Sam? I find that hard to believe. 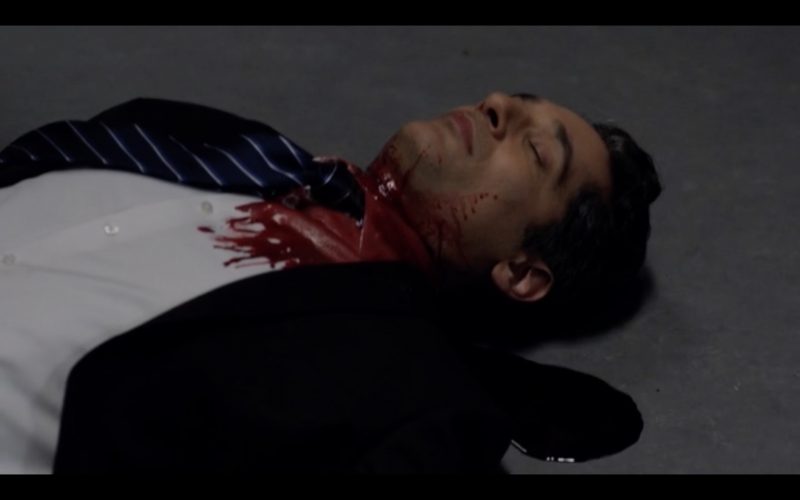 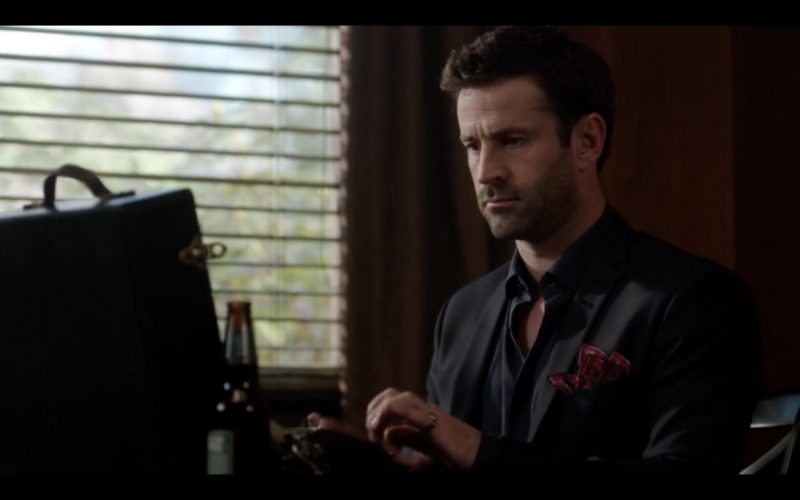 So I can understand the problems some people are having with this episode, and I won’t put it in my all-time favorites category. But for a 250th episode? I liked it. I liked seeing the Winchesters I fell in love with 250 episodes ago back and badass as ever.

So for now, I’m staying in my bubble of smart, competent, scary, badass and hot-as-hell Winchesters, the guys who saved the world. See you next week!