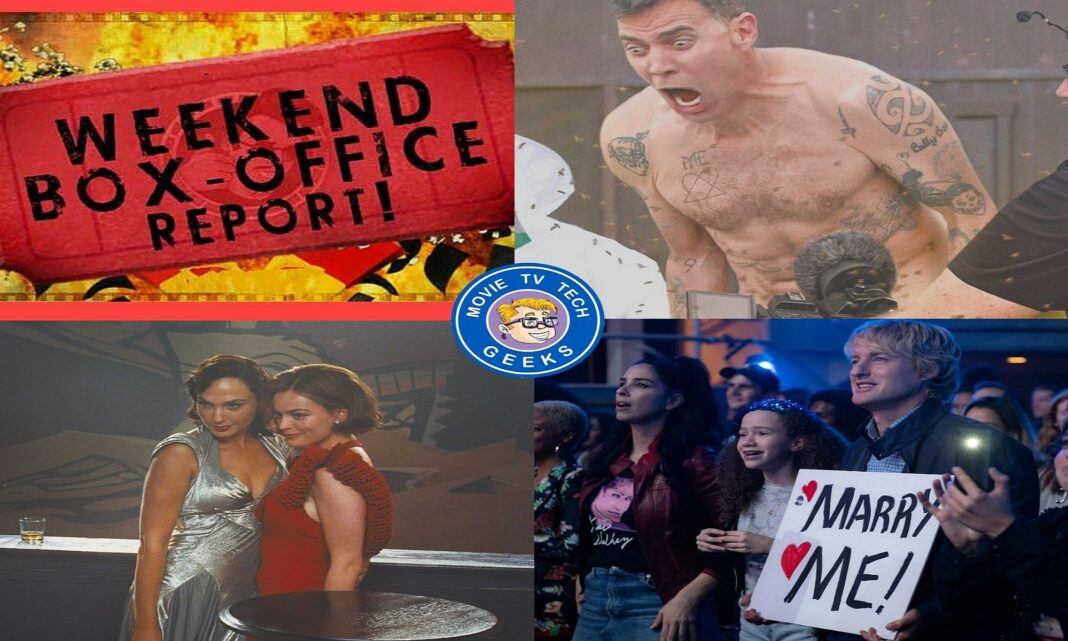 Super Bowl Sunday almost always slows things down at the box office, but with three pretty big star-driven movie debuts hitting theaters, studios were more optimistic. Sadly, this was not to be as the Super Bowl Homecoming Concerts stole the spotlight.

Two of the big films, Jennifer Lopez and Owen Wilson’s “Marry Me,” along with Liam Neeson’s new action-thriller “Blacklight” fell short with third and fifth-place finishes. Even the Academy Award-nominated films only received small bumps at the box office.

“Death on the Nile,” Branagh’s follow-up to the 2017 hit “Murder on the Orient Express,” led all films with $12.8 million in ticket sales, according to studio estimates Sunday. Produced under 20th Century Fox before its acquisition by the Walt Disney Co., “Death on the Nile” had been delayed by the pandemic and by a major scandal that engulfed one of its stars, Armie Hammer.

Last March, Hammer was put under investigation by Los Angeles police in a sexual assault. Hammer has denied the allegation.

Trying to figure out how to retrench the big-budget film, reportedly including reshooting parts of the film without Hammer, Disney opted to release “Death on the Nile” as it was — albeit with less fanfare on a weekend the film industry often yields to football. The $90 million film, which also stars Gal Gadot, Emma McKay, and Branagh, reprising his role as detective Hercule Poirot, had once seemed a reliable money-maker. “Murder on the Orient Express” launched with $28.7 million in 2017 and ended up grossing $352.8 million worldwide against a $55 million budget. “Death on the Nile” added $20.7 million in international receipts.

“Super Bowl weekend is consistently down in overall business compared with other weekends, and we’re still coming off an enormous Omicron surge that peaked in mid-January,” says David A. Gross, who runs the movie consulting firm Franchise Entertainment Research. He adds, “At a cost of $90 million, the movie will need strong overseas business.”

Hollywood’s biggest pitch to moviegoers over the weekend wasn’t in theaters but in television ads. After two years of the pandemic, a heavy-hitting lineup of blockbusters was set to roll out trailers during the Super Bowl broadcast and try to lure still-reluctant moviegoers back to theaters. Last year, when many theaters were still shuttered and few films were being released, Hollywood largely sat out the game. Jordan Peele’s “Nope” kicked off the day with its first trailer early Sunday.

“Marry Me” opened with $8 million while simultaneously streaming on Peacock. The Universal Pictures release, which was timed to Valentine’s Day on Monday, stars Lopez as a pop star who, after finding out her fiancé has been cheating, marries a stranger (Owen Wilson) at one of her concerts. In recent years, streaming platforms have increasingly been rom-com’s primary home. Netflix, in particular, has pumped out a constant stream of new entries in the genre. On Friday, Amazon Prime Video debuted its own: “I Want You Back,” with Charlie Day and Jenny Slate.

The lukewarm performance of “Marry Me” allowed last week’s top film, “Jackass Forever,” to narrowly edge it for second place. Johnny Knoxville’s sequel dropped a steep 65% from last weekend, coming in with an estimated $8.1 million for Paramount Pictures. Its grossed $37.4 million in total.

Adds Gross, “Women, particularly older women, have been slower than others to return to moviegoing, and they are showing it again, here. The budget was reasonable, so the movie should not lose money.”

Few films were set to capitalize in theaters on Tuesday’s Academy Awards nominations. As nominations came later than usual this year, most Oscar contenders — a field that Netflix led with 24 nominations — have been available for weeks, if not months, in the home. But a few films sought a post-nomination lift at the box office, even if the once-expected “Oscar bump” is all but dead.

Paul Thomas Anderson’s “Licorice Pizza,” up for three awards including best picture, had its widest week of release in its 12th week of release, playing in 1,977 theaters. It managed $922,500 in ticket sales, bringing its cumulative total to $14 million.

The biggest bumps out there may have been for a few of the international contenders. Ryûsuke Hamaguchi’s “Drive My Car,” which is nominated for four Oscars including best picture, saw a 92% spike in grossing $192,000 from 127 theaters. Joachim Trier’s “The Worst Person in the World,” nominated for best original screenplay and best international film, earned $255,395 on 49 screens in its second weekend.

The film expected to lead the box office next weekend — Sony’s video-game adaptation “Uncharted,” starring Tom Holland and Mark Wahlberg — began its release overseas, where it took in $21.5 million in 15 territories.

Elsewhere, director Roland Emmerich’s disaster epic “Moonfall” collapsed in its second weekend of release. The sci-fi adventure dropped to the No. 7 spot and brought in $2.85 million from 3,446 theaters, plummeting 71% from its already-weak $10 million opening. The movie, which cost $140 million to produce, has generated a dismal $15.15 million so far.

Estimated ticket sales for Friday through Sunday at U.S. and Canadian theaters, according to Comscore. Final domestic figures will be released Monday (reflected below.)