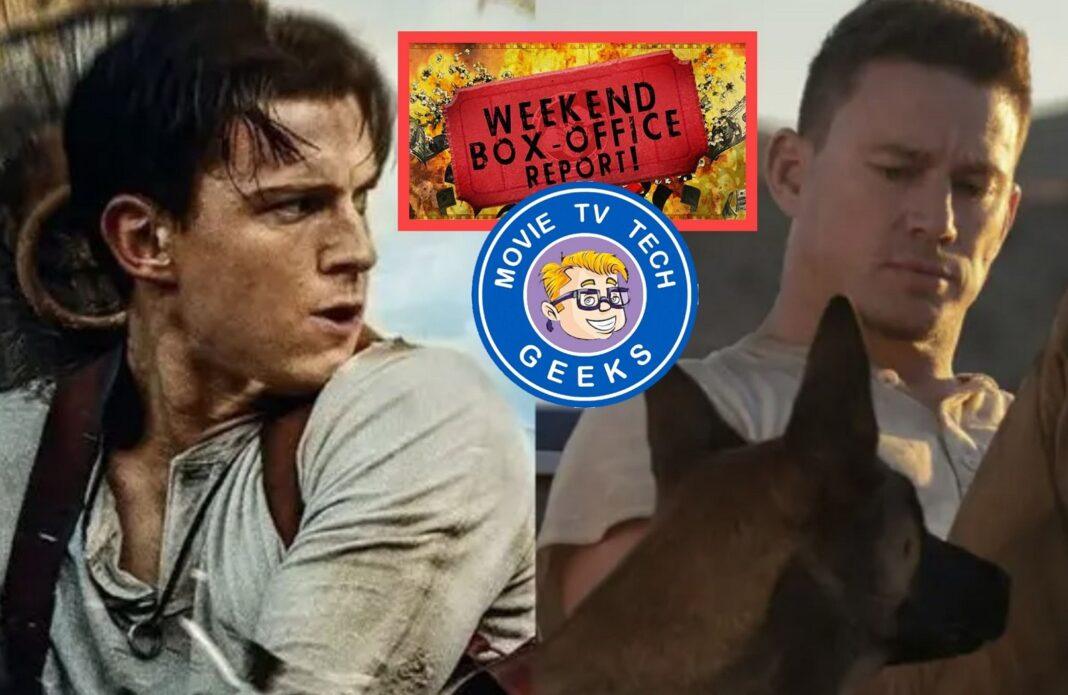 It took Sony many many years to bring the video game adaptation of “Uncharted” to the big screen, but it was able to perform better than expected. Enough to top the domestic box office which is looking to get itself on more sure footing in 2022.

Tom Holland had his bankability tested with this big-budget action-adventure outside of the Marvel universe. While the film has received mixed reviews putting it at a rotten 40 percent. Audiences gave it a score of 90 which is what the studios focus on the most, especially if they are coming out to buy a ticket. Another help with “Uncharted” was its PG-13 rating along with being based on a very popular video game franchise.

While Holland might be without his Spider-Man suit in “Uncharted,” but his latest action-adventure is still doing good business at the North American box office. The video game adaptation starring Holland and Mark Wahlberg is on its way to earning $52 million over the long Presidents Day weekend, according to studio estimates Sunday. Sony Pictures estimated its Friday through Sunday grosses will be $51.3 million, putting it at No. 1.

Though not a superhero payday, it’s enough for the industry to breathe a sigh of relief as it’s the biggest opening weekend since “Spider-Man: No Way Home.” The weekend’s other new opener, “Dog” found a modest audience too and landed in second place.

The unpredictability of pandemic-era audiences made “Uncharted” a bit of a wild card, and the poor reviews from critics had some going into the weekend with cautious optimism. Directed by Ruben Fleischer, who previously returned for a “Zombieland” sequel after leading Tom Hardy’s “Venom” to box office glory, “Uncharted”, based on the PlayStation game, opened on 4,275 screens.

“This result is yet another extraordinary testament to the appetite for the theatrical experience that Sony Pictures bet on,” said Josh Greenstein, the president of Sony Pictures Motion Picture Group, in a statement.

Sony also released the megahit “Spider-Man: No Way Home” exclusively in theaters late last year. That Holland-led enterprise has now earned over $770.1 million in North America and is the No. 3 domestic release of all time.

“Tom Holland is a megastar regardless of whether he’s Peter Parker or Nathan Drake,” said Paul Dergarabedian, the senior media analyst for Comscore. “For many of the actors who have portrayed superheroes, breaking out of that role and having big box office success outside of that is a tough go.”

“Uncharted” does have a distance to go to make up its $120 million production budget, which will likely be heavily offset by overseas earnings. Its global total has already surpassed $100 million and, unlike “Spider-Man,” “Uncharted” landed the big benefit of a release in China, beginning March 14. Visual effects and heavy action adventures tend to do well in China. The country’s censors have been a bit more choosy with Hollywood movies screening in their theaters, but the government does have a hand in approving films. This has caused a mixed bag of results at the box office so the film’s success isn’t guaranteed. With the film not opening until the middle of May, piracy is a huge concern.

“This is an excellent opening,” says David A. Gross, who runs the movie consulting firm Franchise Entertainment Research. “Action adventures based on video games are big movies and this weekend’s figure is nearly double the average for the genre… Budgets run high, so ‘Uncharted’ needs to connect in every market. So far, it is doing that.”

As Gross notes, “Uncharted” has been a favorite among overseas audiences. Over the weekend, the movie has earned $55.4 million from 62 territories at the international box office and has crossed $100 million globally. Since opening in select international territories last weekend, “Uncharted has generated $139 million worldwide to date.

“Uncharted” follows the globe-trotting treasure hunter Nathan Drake and his wisecracking partner Sully (Mark Wahlberg, who was once attached to play Nathan Drake and has since aged out of the role) as they embark on a death-defying quest to uncover the greatest treasure never found. Complicating matters, the fearless explorers are racing against two baddies (played by Antonio Banderas and Tati Gabrielle) to locate the fabled fortunes. Audiences have awarded the film a “B+” CinemaScore. More than 60% of opening weekend crowds were male and roughly 70% were 35 or younger.

Executives at Sony say “Uncharted” welcomed a stronger-than-expected opening weekend turnout because the film is playing only in theaters. Unlike other pandemic releases, such as “The Matrix Resurrections,” “Jungle Cruise” and “Black Widow,” people can’t immediately watch “Uncharted” at home.

“This result is yet another extraordinary testament to the appetite for the theatrical experience that Sony Pictures bet on,” Sony Pictures Motion Picture Group president Josh Greenstein said in a statement. “Tom Holland and Mark Wahlberg are brilliant together.”

Channing Tatum’s “Dog,” which he co-directed (with his longtime producing partner Reid Carolin) and stars in, also opened on 3,677 screens this weekend. United Artists estimates that it’ll earn $15.1 million for the weekend and $18.1 million including Monday. Tatum plays an Army ranger tasked with driving a traumatized military dog from Oregon to Arizona for her handler’s funeral in the film, which was received well by critics and audiences. Plus, it only cost around $15 million to make. Simply put, this is nearly blockbuster status for a film not based on comic book characters or another chapter in an existing film franchise. With its $15 production budget, “Dog” is already a winner for Tatum, who directed the movie with Reid Carolin, as well as MGM, who produced the movie along with FilmNation Entertainment.

The feel-good film —  it was marketed with the tagline “Don’t worry, the dog doesn’t die” — played the strongest in America’s heartland, where “Dog” generated more than 75% of its business, according to MGM. It has an “A-” CinemaScore, which indicates the movie should benefit from positive word-of-mouth. Among inaugural ticket buyers, 54% were female, 73% were over the age of 25 and 37% were 45 or older.

“To have two movies do really solid business makes it feel like 2019 all over again,” Dergarabedian said.

In its second weekend Kenneth Branagh’s “Death on the Nile” landed in fourth place with $6.3 million on 3,280 theaters, behind “Spider-Man,” while “Jackass Forever” took fifth place with $5.2 million at 3,071 locations.

According to Dergarabedian, the momentum from this weekend should be the “perfect leadup” to the already highly anticipated release of Warner Bros. “The Batman” on March 4.

“Think about all the people in the movie theater this weekend being exposed to trailers,” Dergarabedian said. “This is great news for ‘The Batman.’”

Jennifer Lopez’s romantic comedy “Marry Me” hasn’t yet found its happily ever after. Notching sixth place, the Universal Pictures film amassed $3.6 million over the weekend, marking a 61% dip from its opening. The movie is expected to finish with $4.2 million on Monday, which would take its domestic total to $17.4 million. “Marry Me,” which co-stars Owen Wilson and Maluma, is available simultaneously on NBCUniversal’s streaming service Peacock.

Estimated ticket sales for Friday through Sunday at U.S. and Canadian theaters, according to Comscore. Final domestic figures will be released Monday.