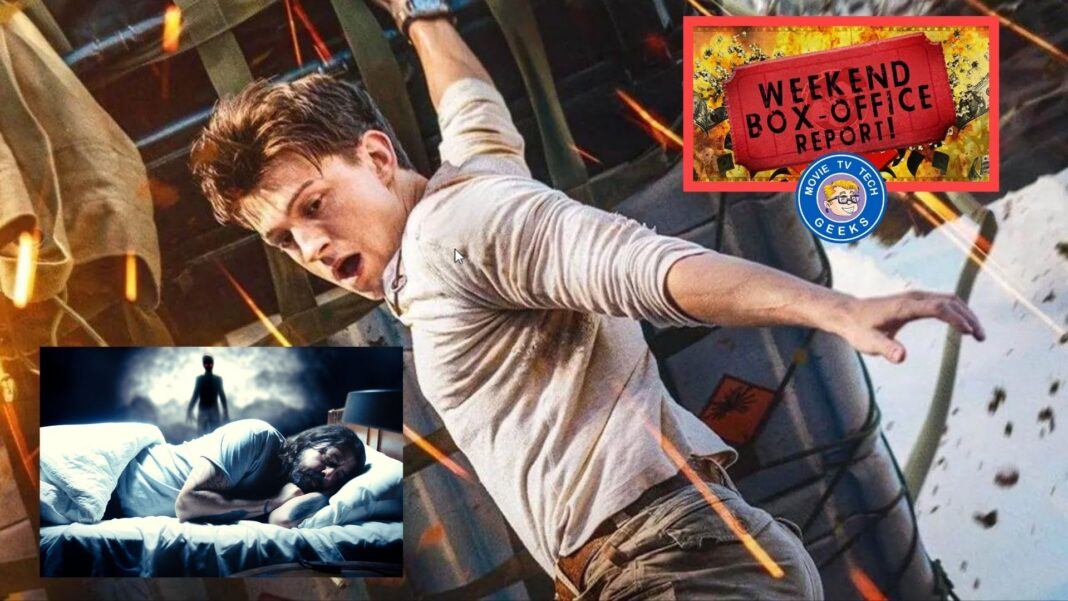 Hollywood put the test to Tom Holland, and the “Spider-Man” actor has proven his mettle with two number movies at the box office for the eighth time in just two and a half months. “Uncharted” remained atop the box office charts for another week for a quiet week with uncertainty in the world thanks to Vladimir Putin.

The film’s robust international sales includes box office from Russia, where studios have thus far elected to keep movies in release after the country invaded Ukraine earlier in the week. The Ukrainian Film Academy on Saturday called for a boycott of the Russian film industry following the invasion.

On the heels of the blockbuster business for “Spider-Man: No Way Home,” the success of “Uncharted” has minted the expanding star power of the 25-year-old Holland. “No Way Home,” which led the box office six times over December and January, is still one of the top draws in theaters. This weekend, it landed in third place with $5.8 million, edging it closer to $800 million in domestic ticket sales.

While both “Uncharted” and “Spider-Man: No Way Home” have benefitted from brand recognition, rarely has one movie star reigned so much over a 12-week span in theaters.

For big-budget tentpoles, which tend to be front-loaded in terms of box office grosses, a 50% drop is standard. But making the hold for “Uncharted” a little more impressive, the film did not enjoy the rapturous reviews that greeted “Spider-Man: No Way Home,” meaning Holland’s star-power likely had a hand in selling movie stubs. It helps that “Uncharted” is based on an extremely popular video game series and caters to younger males, a demographic that has been reliably going to multiplexes during COVID-19. Directed by Ruben Fleischer, “Uncharted” carries a $120 million price tag, so international ticket sales are key to getting out of the red. It’s already been a big draw overseas, delivering another $35 million from 64 foreign territories over the weekend. So far, “Uncharted” has generated $143 million at the international box office and $226.4 million globally — and that’s before it opens on March 14 in China, the biggest moviegoing market.

Star power, too, has kept the Channing Tatum-led “Dog” at the number two spot. The MGM release, which Tatum co-directed with Reid Carolin, declined just 32% with $10.1 million in its second weekend of release. So far, the film — in which Tatum plays an Army Ranger paired with an Army dog on a road trip — has made $30.9 million against a $15 million budget.

Inspired by 2017’s HBO documentary “War Dog: A Soldier’s Best Friend,” the film follows Jackson Briggs, an Army Ranger desperate to see action again after getting sidelined by a brain injury that induces seizures. To get back into his commanding officer’s good graces, he accepts an assignment to drive Lulu, an Army dog who served in Afghanistan, some 1,500 miles in his lovingly restored ’84 Bronco so the canine, herself traumatized by her wartime experiences, can attend the funeral of her late handler.

With the release of Warner Bros.′ “The Batman” coming on Friday, few new wide releases opened in theaters — and the ones that did struggled to make an impression.

The Foo Fighters’ horror-comedy “Studio 666,” released by Open Road and Briarcliff Entertainment, went the widest, opening in 2,306 theaters. The movie, starring Dave Grohl and company as themselves while making their 10th record in a haunted house, debuted with $1.5 million.

David A. Gross, who runs the movie consulting firm Franchise Entertainment Research, called “Studio 666” an “original oddity,” one that was built around Dave Grohl’s and the Foo Fighters band’s popularity. “This is a weak opening, he said, noting “there aren’t many horror comedies in general” at the box office. Open Road Films and Briarcliff Entertainment released “Studio 666.”

The repeated delayed “Cyrano,” starring Peter Dinklage, launched in 797 theaters and totaled $1.4 million for MGM. The musical, directed by Joe Wright, has been warmly received by critics, might have benefitted from a boost in Oscar nominations, but after several major Golden Globe nominations, it landed only a nod for costume design.

Disney and 20th Century’s murder mystery “Death on the Nile” grossed $4.5 million from 3,420 screens. After three weekends in theaters, the movie has earned a so-so $32.8 million in North America. On a better note, “Death on the Nile” has been more popular among overseas audiences. It has generated $68 million at the international box office, taking its worldwide haul to $101 million. Directed by Kenneth Branagh, who stars in the movie alongside Armie Hammer, Gal Gadot, and Letitia Wright, “Death on the Nile” cost a hefty $90 million to produce.

“Jackass Forever,” from Paramount Pictures, pulled in $3.1 million from 2,913 locations in its fourth weekend of release. The $10 million-budgeted slapstick comedy has been a surprise winner at the box office, grossing $52 million to date.

Robert Pattinson’s “The Batman” from Matt Reeves is looking to crank up the box office next week as the superhero film rolls out internationally. As with most big tentpoles, it will hit theaters worldwide in the middle of the week before opening in North America on Friday.

Estimated ticket sales for Friday through Sunday at U.S. and Canadian theaters, according to Comscore. Final domestic figures will be released Monday.