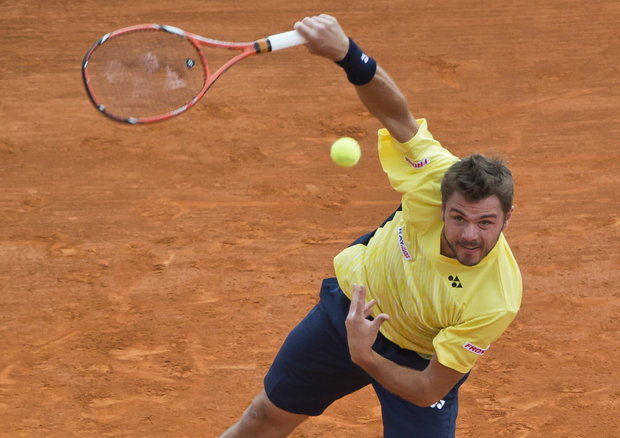 This has easily been one of the most exciting days of tennis at the 2015 Rome Masters Open where nothing was guaranteed. Novak Djokovic got tested hard in his second set lost to Kei Nishikori, but he came back strong. Rafael Nadal was truly tested by Stan Wawrinka and lost his first set shocking the crowd in Rome.  Then when he lost his second set on his home turf, it was quite a shock but the win was truly earned and worked for as he beat the seven-time champion 7-6(7), 6-2 on Friday.

Wawrinka was able to save four set points which made it easier for him to take the first set which was very close. Wawrinka struck 16 winners to Nadal’s 11 in a first set that saw the Swiss broken twice, only to hit straight back on both occasions before taking a tight tie-break.

Nadal then toiled in the second, Wawrinka gaining a double-break advantage before staving off four break points in an epic sixth game for a 5-1 lead.

The eighth seed had to hold off another break point in his final service game, but he fought back to pull off a notable scalp.

Wawrinka was determined to get as far as he could with this match and at times Rafa was letting his frustrations get in the way. Nadal knew he had a lot riding on this match as his loss keeps him from being the fourth seed in the 2015 French Open. A win would have also let him jump up on the tennis rankings as both Tomas Berdych and Kei Nishikori lost games on Friday.

It was the first meeting between Wawrinka and Nadal since last year’s Australian Open final, when the Swiss won his maiden Grand Slam. The Spaniard still leads their FedEx ATP Head2Head series, now 12-2.

Wawrinka’s best result at this ATP World Tour Masters 1000 tournament was a runner-up finish in 2008 (l. to Djokovic).

Coming into this week, Wawrinka had not won back-to-back matches since Rotterdam in February. The World No. 9 lifted the trophy there (d. Berdych), his ninth ATP World Tour title. He also won the crown in Chennai (d. Bedene) to start his 2015 season.

Federer leads Wawrinka in their FedEx ATP Head2Head series 15-2. Wawrinka’s two wins over the second seed both came on the clay of Monte-Carlo in 2009 and 2014.

Spaniard Nadal has been dominant on the red surface for the past decade, but he has struggled to shake off form and fitness issues that hampered him during the 2014 season, and he failed in Monte Carlo and Barcelona before losing to Andy Murray in last week’s Madrid Open final.

On Monday, Nadal dropped out of the top five in the ATP rankings for the first time in 10 years — falling to number 7. That wasn’t long after dropping to number 5 and then climbing back to number the number 4 position.

Three-time runner-up Federer was broken early in his quarter-final tie against Tomas Berdych before recovering to win 6-3 6-3.

The Swiss hit 15 winners and just 11 unforced errors as he continues his bid for a first Rome success in 15 attempts.

World number one Djokovic had been taken the distance by Nicolas Almagro and Thomaz Bellucci already this week, and he once again needed a decider to defeat Nishikori 6-3 3-6 6-1.

The top seed showed his class by reeling off five straight games from 1-1 in the decider. He remains in fine form ahead of the French Open and he has now won 20 consecutive matches, his last defeat coming to Federer in Dubai in February.

“(There were) ups and downs for my side in all three matches,” Djokovic said. “But in the end (it’s about) just finding a way. This is what it takes to win, just finding the proper way and managing to perform your best when it matters.”

Djokovic let out a loud roar and threw his arms forward in a windmill action when he broke Nishikori’s serve early in the third set to take control.

“That break on 2-1 in the third set was crucial,” Djokovic said. “I knew that breaking his serve would give me wings. … I started swinging through the ball better and made less unforced errors and the match was gone in a very short time.”

Djokovic’s semifinal opponent will be seventh-seeded David Ferrer, who beatDavid Goffin of Belgium 6-2, 4-6, 6-3.

For the semi-finals, Novak Djokovic takes on David Ferrer and Roger Federer will play the man who knocked Rafa off his home turf, Stan Wawrinka. Odds are looking good that we could see Djokovic taking on the Swiss maestro in the finals, but like today, this Open is filled with some surprises.

Also, 21-year-old Daria Gavrilova of Russia beat Christina McHale of the United States 6-2, 6-4 in a matchup of two qualifiers. In her first Masters semifinal, the 78th-ranked Gavrilova will meet either two-time Rome champion Maria Sharapova or former No. 1 Victoria Azarenka, who were playing later.

The 2010 U.S. Open junior champion, Gavrilova lives in Australia and is awaiting a change in citizenship. She beat Sharapova in Miami this year.

Under overcast skies with some rain drops falling briefly, Federer fell behind a break midway through the first set but recovered it immediately and cruised from there.

“From the baseline I was playing very well.” Federer said. “My serve was not quite there from the beginning. I was hitting too many second serves and he was able to take advantage of that and break early. So it was important to pick it up on the serve, which is maybe the easiest thing to do.”

“I felt good again on the return and (was) moving well, so as the match went on I got better and better,” he added. “The wind picked up in the second set — that’s when I think Tomas didn’t play so well anymore and I was able to get the job done.”

Perhaps fatigued from his three-set win over Fabio Fognini a day earlier, Berdych struggled to get his first serve in and rarely pushed Federer into long rallies.

Berdych attempted to take the initiative while serving at 3-4 in the first set but Federer produced a spectacular backhand cross-court passing shot with a flip of his wrist that left the Czech player looking on in admiration.

“I’m hitting my backhand quite well at the moment,” Federer said.

Federer went on to break Berdych’s serve to take a 5-3 lead and quickly served it out.

“Roger played a very good game. He really used his chances,” Berdych said. “He just played well. But there are days like that.”

After winning a title on clay in Istanbul two weeks ago, Federer lost his opening match to rising Australian Nick Kyrgios at last week’s Madrid Open. But he has played solidly here, also beating Kevin Anderson of South Africa in straight sets in his opening match.

Making his 15th appearance at the Foro Italico, Federer is a three-time finalist. He was beaten by Felix Mantilla in 2003, by Nadal in a fifth-set tiebreaker in 2006, and by Nadal again in 2013.

Rome is the last big warmup for the French Open, which starts in nine days.