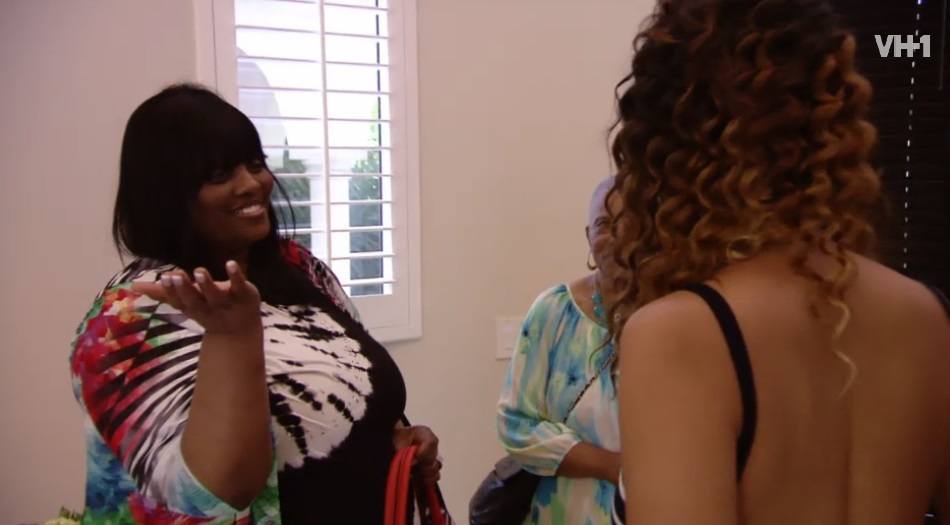 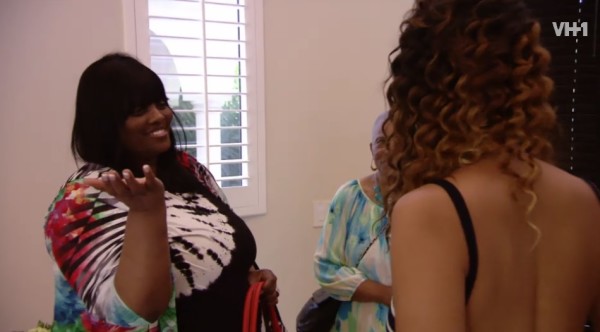 The family affair continues on this episode of She’s Got Game, as momma and grandmomma are still at the house and the girls are still trying to impress them. The remaining four girls have a tough fight on their hands because the two women in Game’s life do not play.

They get back to the house after dinner and Game’s mom tells him that they had fun but the food was horrible. Jennifer is glad that it is over and she kind of takes everyone’s dislike of the resturant personally that they didn’t like it. Briona is back at the house from the hospital looking pretty rough.

Jennifer shares her experience with Game in the tube with Rebecca who asks him a lot of questions. She pretty much she says that they just chilled and didn’t see or do anything, to which Rebecca thought was crazy. “If I were in the tub with Game we would have done more than just talk.”

Game later speaks to his mother and grandmother to get their opinion on the girls. They love Rebecca, and kind of love Shyona too. They think that Jennifer will “be your friend for life” and that Briona is “too young.” Game says it’s too stressful and his grandmother says he needs to rely on God when choosing. As for going out on a date, they tell him to take Rebecca. He tasks his momma and her momma to put the other “girls to sleep.”  The other girls are not feeling it, especially Shyona.

Back at the house, Shyona and Jennifer chop it up about how they feel about Rebecca getting another date. Shyona says that she has a lot of feelings for Game and it’s hard for her deal with the other girls that try to get his affection.  While on their date, Rebecca is impressed with it but lets her jealousy get the best of her as she asks him, “Are you going to bring Shy here in three days.” He looks at her speechless and somewhat offended.

The next morning, Jennifer and Shyona make breakfast for momma and grandma and the love it. Briona on the other hand, just rolls right in and pretty much doesn’t say anything. Rebecca also comes in with Game in front of his mom and the other girls can’t believe that she did “the walk of shame” in front of them. Briona is desperate to know what happened on the date and takes Rebecca up stairs to find out. She tells her pretty much that they slept together and that she’s in love.

He knows that the girls feel a certain kind of way about Rebecca’s date so he wants them to gets out of the house. They take a trip to a monkey park and he has his mom and grandma ride with Rebecca, Jennifer and Shyona while he and Briona ride in his car so that he can talk to her. It is clear that he is feeling her and is really pulling for her. He kind of doesn’t care that she’s young and tells her to be more active with his mom and grandma.

At the monkey park, Jennifer connects with his mother and grandmother and it comes off as her trying to get in good with them as a way to get points with Game. Shyona peeps this but is not bother because Jen has put herself in the friend zone.

While out, Jennifer takes it upon herself to speak to Game because she is feeling the disconnect. She knows that by her not getting as much time with him as the others, she is at a disadvantage. She expresses this and says that she does feel a connection with him but is not aggressive and throwing herself all over him because is not her style You can so not feel the chemistry between these two.

Rebecca, Briona and Game spend some time together back at the house in their room before dinner and they give him a massage. Rebecca does not like Briona touching him and she actually asks Game about his time with Jennifer in the tub at the pool party. She asks him what they did in the tub and he said nothing.

They all join in cooking Gumbo with his mother. While they are doing that, he calls Briona to the side and tells her that she still hasn’t done what he told her to do with getting in there with him mom. He is really trying to get this girl on their good side which is interesting because she is obviously has no clue which is a result of her being young. So she tries to go down and talk to them while the other girls are cooking and Game’s mom tells her to go back over there and cook with them.

After they finish and eat the gumbo, Game lets them know that his mother and grandmother are doing the elimination. They address each girl and let them know what the think of them and ultimately send Jennifer home (it was between her and Briona) because there is just no chemistry between her and Game.

Next week is the finale and I think he will pick either Rebecca or Shyona. We’ll see who’s got game.