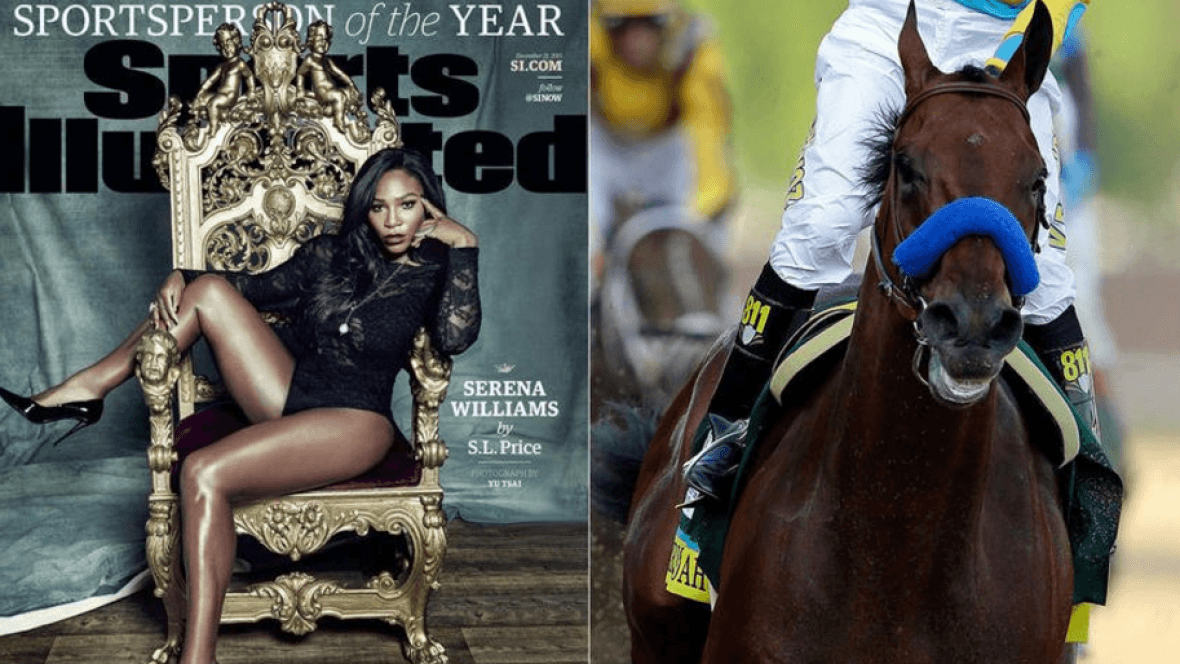 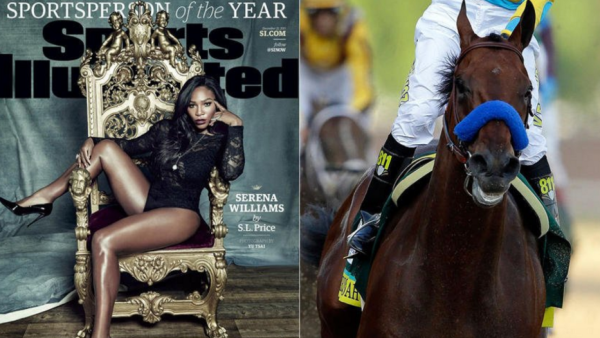 Countless times this year, I have been taken aback by absurd news and happenings more times than I wish to mention. I mean, from the death of unarmed black men, continually, to Donald Trump actually having support for his presidential campaign, I am floored and Uberly concerned with the direction in which this country is going. Nonetheless, even with those things (and so many others), there is one news story that stings just a little bit more- the campaign for American Pharoah to be Sports Illustrated Sports Person of the year in place of Serena Williams. The news about people actually being upset and/or even suggesting that a racehorse should have gotten the honor instead of the tennis great is beyond outlandish. It’s insulting!

People have the audacity to be truly mad about this, which baffles the hell out of me because there is no comparison. American Pharoah is a horse, Serena Williams, a person. But more than the situation baffling me, it makes me sad because it showcases a very real thing in our society- black people are still seen as animals.

How else do you explain people, including Victor Espinoza American Pharoah’s Jockey, comparing the performance of the two? There is no way that a horse, I don’t care how good it is, deserves that title. There is something that recognizes the best achievement in horse racing (or something like that) I am sure, but being on the cover of Sports Illustrated it not it. No animal (and I love animals) can receive an honor meant for athletes at the top of their game. Serena is the prime example of athleticism at it’s best. We all know this, and it is perhaps that knowledge that pisses people off the most. No other female athlete can touch her. In fact, outside of Lebron James and maybe Steph Curry, there is no other athlete!

The tennis players’ receipt of the honor makes her only the third woman in the award’s 61-year history to do so plus she is the first black woman ever. And that makes the impact of the contention even more of a slap in the face for me.

In a time where she should be celebrated for what the honor means she’s accomplished, people are taking Serena’s thunder so to speak, by arguing about how much a horse deserved to get it instead of her. Nevermind the fact that she has had one of the best years in her professional career, losing only three of 53 matches. How can this even be an argument?

One of the unfortunate truths of this situation is that this would not be an issue if it were one of the USA female soccer players or Maria Sharapova because they are white girl wonderful. It seems that any time, a black woman or black man achieves anything previously dominated so immensely by white people (yes I said it) there is a problem.

You have no idea how much this pangs me because as I have written before, I did not grow up with race in my face on a daily basis. I did not see the world in black and white as I, a lot of times, do today. But when you keep seeing this kind of thing happen over and over across multiple industries, it brings all these feelings up. Because the reality is no one is better than the other. No race, ethnicity, color or size for that matter is better. But we live in a world that categorizes people by how they look rather than their talents and because of that, it creates the divide amongst nations.

Aside from the whole “black people are animals” thing or “white girl wonderful” situation, maybe it’s just the fact that it is Serena Williams that fucks people up. I mean, she doesn’t fit the acceptable societal black girl mold. You know, the one that says light skin girls with long hair, green eyes, a big ass and bit boobs can play the game. That mold society can deal with. That mold is worthy enough to get the praise because they are more reflective of societal tastes. Just look at Serena Willaims, a powerhouse chocolate hottie that is unapologetic in EVERYTHING that she does. That shit doesn’t always sit well with people. And not to mention that the girl can dress her ass off too. An athlete and a fashionista, now that is a winning combination.

Perhaps the real reason for the uproar is elitism, another ass-backwards mindset that runs rapid in our culture that is spoken on quite a bit. And I do so often because I have seen it first hand and so I know it’s root and the damage that it can cause. People like Victor Espinoza, feel entitled to something that they have not worked hard enough for and thus when they don’t get what they want, they create a backlash in the biggest way-publicly.

I don’t care what anyone say Serena deserves SportsPerson of the Year. I mean damn, how much more do black women have to take on to get our props. We are not all angry. We are not all bougie and we are not all looking for a handout. All we want is a chance to play, and when we get it, you can best believe that we will not accept anything less than 1st place.