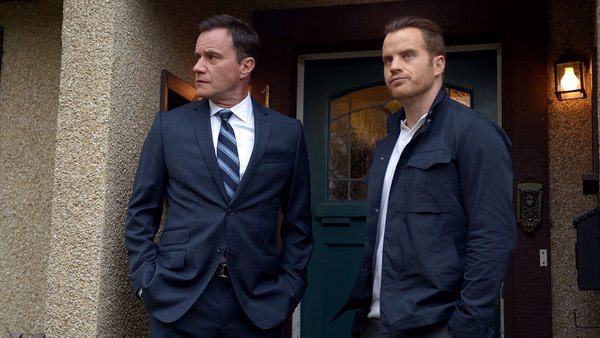 Second Chance Se1 Ep 7 That Time in the Car

Someone who’d never seen Second Chance may have drawn a couple of strange conclusions if they only caught bits and pieces of episode seven.

– They may be confused by Alexa being married to her “dad.”

– Or a new viewer might just see Alexa’s elderly husband as one lucky dude.

To start this week, we see Jimmy is drunk after another poker night. Alexa helps him to his room and gets to see his tank, as well as the data log that would be of help to Conner.

I have to believe Otto or Mary would be alerted if anyone was entering Jimmy’s restricted living area, but we’ll let that go.

I can envision the hardass that old man Jimmy was when it came to guys dating his daughter Helen. The Sheriff and Duval get to revisit one such fellow, Wally The Weasel.

Jimmy decides this guy is still no good for Helen, so he follows him and violates his Constitutional rights with the help of his digital pal Arthur. The Weasel is falsifying parole records for a thief named Jasper. So the Pritchard boys have to tell Helen about her boyfriend. She feels like an idiot and says her dad was spot on when he called her just that back in high school. An idiot.

We get a hint of what’s going on with Alexa as she sends Conner parts of the regeneration code she swiped. Her “father” sees what she’s doing and knows she feels guilty, but knows she is doing it for him. Alexa justifies her actions by saying, ” Otto threw me out before I was even formed.”

It sounds like she was the first human trial from Otto’s experiment to bring a human back from death, or maybe just old age.

The Pritchard boys try to figure out what Jasper is up to, by using Wally. He says he got set up before he ever agreed to take any bribes. Wally goes along to help, but the money transfers are too complicated for Arthur to solve. Otto is of no help as he mourns on the anniversary of his parents’ death by not speaking.

The “big bad” in this episode is Brian Mellenburg, a hedge fund con man who is working with Jasper. He is doing the money transfers to Wally, and eventually, Otto breaks his silence to figure this out. If something were to happen to Otto, no crime would ever be solved on this show.

Otto blames himself for the wreck that took his parents from him since his dad was distracted by the little genius’ blathering on about some science information right before the crash.

The heist turns out to be of the human variety as Jasper steals Mellenburg from the police van. Mellenburg is one determined dude! While in jail, this brainiac has set a plan in motion to fake the death of the judge who sent him to prison. Then have the judge caged at a secret location where Mellenburg arrives all set up with eight months of food. The plan is to watch the judge starve to death right up until the crook meets his own demise from cancer.

Operating inside the rules of law, the FBI can’t  get any info from Jasper so the Sheriff steps in with the help of Wally. Jasper gets the “Full Sheriff” treatment, which means two broken hands before the guy squeals on Mellenburg.

The FBI ends up storming the compound as Mellenburg enjoys his classical music and a steak dinner. Duval took a lot of pleasure in telling the megalomaniac that it was an old man and a weasel who tracked him down.

The softer side of Jimmy was on full display as he apologized to Helen for the “idiot comment” in the only way he could in his current form. Duval interrupted the moment before Jimmy confessed to being her dad in a regenerated body.

The Sheriff showed more progress toward becoming the best version of himself than we’ve seen so far this season.

He and Duval have another dinner set up for Helen and Wally to smooth things over. Bad news for Wally is he still has to serve a short stretch in the pokey for the bribes.

Mary and Otto relive the day of the wreck that left them orphan wonder twins. Otto needs reassurance that Mary will keep her promise of never leaving him. The promise made by his sister as they sat on the roadside near their parents’ lifeless bodies.

Plot twist: Alexa is an old lady, similar to what we see with Jimmy. This is revealed as she and the old guy I assumed was her dad take a stroll down memory lane with their wedding pictures.

It’s unclear just how she came to be young again. What is clear is that Conner needs Otto’s notes to make Alexa’s husband young like her. My guess is that something went wrong with Alexa’s regeneration, but Mary knows nothing about it. Otto did start Jimmy’s resurrection without his sister’s knowledge.

We’ve got six more episodes left, and I’m guessing Alexa has some special abilities of her own.