Google‘s biggest problem has been having too many operating systems. The Chrome OS is basically an extension of Chrome’s web browser, and then there’s Android, the more popular of the two.

Chrome works great on large laptop and tablet screens, whereas, Android is more awkward. Android is great for gaming and offline functions, but Chrome OS is limited in those areas. So you can see the issue is two systems doing what the other wishes it could.

How did Google fix this? They brought them together. Something that should have been done long ago. Last spring, they announced the Google Play Store would now be compatible with Chrome OS. So those thousands of Android-based apps could be expanded further.

Samsung is one of the first out of the gate from this pairing up, and while not perfect yet, this could prove to be quite the game changer for Google.

Samsung created its Chromebook Pro from the ground up so it can run Android apps from the Google Play Store. Quite a nice marriage of the two without those pesky overheating fires that plagued Samsung last year.

Early reviews have run from not quite ready for primetime to Samsung’s new Chromebooks could pose a serious threat to Microsoft‘s devices and Windows OS, which have always kept a healthy share in the market. The touchscreen and digital pen push the Chromebook Pro into the Microsoft Surface turf.

Having the integration between the Chrome OS and Android could push Chromebooks ahead quickly for Windows users who would like to have cross-device access to all their apps and services.

The 12.3-inch, 2.38-pound Samsung Chromebook Plus, which has been available for pre-ordering since last month, is priced starting at $449.99. It features a Quad HD display made of Gorilla Glass 3 that can rotate a full 360 degrees, enabling the device to be used as either a laptop or tablet. It comes with a 2 Ghz, hexa-core dual ARM processor. In contrast, the same size Chromebook Pro will be powered by a 2.2 Ghz Intel Core m3 processor and will be priced starting at $549.

Both devices come with 4 GB of RAM and 32 GB of storage, with a battery life of up to eight hours and include two USB-C ports and support 4K streaming.

All of the latest Chromebooks will also now provide improved assistive technology for visually impaired users, Google announced yesterday. The updated version of the ChromeVox screen reader will make it easier for users and teachers to navigate and select commands, and adds new auditory features to give users more contextual information about screen and app activities, according to Google. 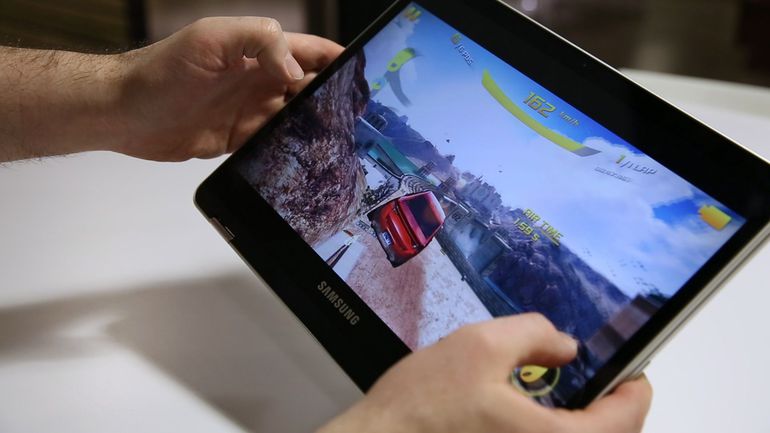 The two new “premium” Google Chromebooks from Samsung offer hardware and software improvements not available on most standard models. The company has wisely carried over many features from Samsung’s tablets, including a touch screen, a stylus and an Android app store to extend the app offerings.

The hope is that the new versions will attract a broader range of consumers than the K-12 students who mostly use Chromebooks now. Currently, Chromebooks are stripped-down laptops that don’t function well in the absence of a Wi-Fi connection.

Here are some details on the new laptops:

– PRICING: Samsung’s Chromebook Plus starts selling Sunday for $449. The Chromebook Pro, with a faster processor, will come out in late April for $549. That’s cheaper than MacBooks and many Windows laptops, but still high for Chromebooks. Budget models sell for less than $200.

– BECOMING A TABLET: Both new Chromebooks have 360-degree hinges so that the screens can flip over into a tablet mode. This makes them similar to “2 in 1” Windows offerings, which use hinges or have detachable keyboards to turn laptops into tablets. One oddity: With the screen faceup, the keyboard is on the back. Though typing is disabled in that mode, it feels odd in your hands.

– A WRITING INSTRUMENT: The Chromebooks borrow a design element from Samsung’s Note phones. Fortunately, it’s not the battery found in the fire-prone Note 7 phone, but a stylus that fits into a spring-loaded slot on the side when not in use. Apple‘s iPad Pro and Microsoft Surface tablets don’t have any slot, making it easy to misplace the stylus.

– ANDROID’S ARRIVAL: Google is bringing Android apps to Chromebooks, broadening their possible uses and allowing people to use the devices even when an internet connection isn’t available. Many Android apps are already designed to work with phones and tablets, even when offline. The Netflix Android app, for instance, supports downloads for offline viewing; Netflix on the browser requires a live internet connection. Android on Chromebooks is still in a “beta” test mode and is available only on a handful of devices. The two new Samsung models will be among them. More Chromebooks will get Android when the Pro comes out in April.