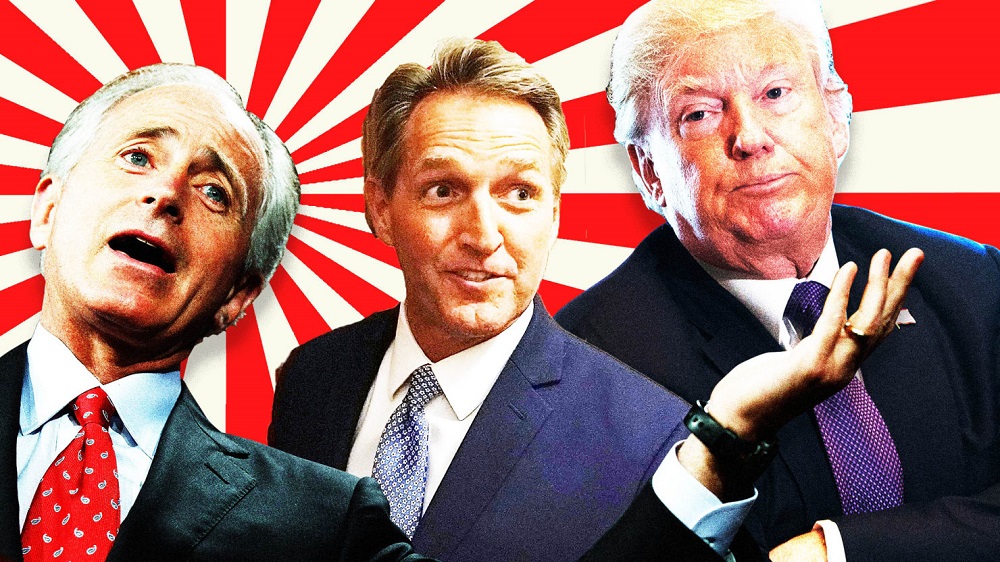 People keep wondering just what will it take for Republicans to finally stand up to Donald Trump, but on Tuesday, it turned out Senators Jeff Flake and Bob Corker doing it just wasn’t enough.

In the past week, three top well respected Republicans have called out Trump for his disgraceful behavior and treatment of the being American’s commander-in-chief. Still, Republicans can’t let him go yet.

There was no dam break of Republican rancor against Donald Trump on Wednesday, a day after a pair of the party’s prominent senators denounced their president and invited colleagues to join them. Instead, most GOP lawmakers rallied around Trump and his agenda, with one all but saying “good riddance” to Jeff Flake of Arizona and Bob Corker of Tennessee.

“Maybe we do better by having some of the people who just don’t like him leave, and replace them with somebody else,” Sen. Jim Inhofe of Oklahoma told media outlets. “And I think that’s what’s happening.”

Trump heartily agreed, declaring that both men were retiring because they couldn’t win re-election, and “I think I’m probably helped greatly in Arizona by what happened with Sen. Flake.”

Inhofe went further than most GOP lawmakers, but he had plenty of company in his refusal to echo the criticisms of Flake and Corker. Trump himself proclaimed he was leading a party unified in its pursuit of tax cut legislation.

“There is great unity in the Republican Party,” he contended as he left the White House for a hurricane briefing and other events in Texas. Claiming a show of affection at his appearance at a Senate GOP lunch a day earlier, Trump said: “I called it a lovefest. It was almost a lovefest. Maybe it was a lovefest.” He repeatedly said that he got multiple standing ovations.

But if the lunch — no outsiders allowed — displayed a unity of sorts, the events that preceded and followed it did the opposite. First Corker and then Flake blistered Trump with criticism, accusing him of leading the nation into a moral black hole. Both lawmakers do plan to retire at the end of next year, a semi-bombshell Flake dropped Tuesday, freeing them to speak without fear.

Flake kept it up Wednesday with an opinion piece in The Washington Post. He likened the current moment to the red scare era of the early 1950s when Sen. Joseph McCarthy threw accusations of communism at a wide range of people. McCarthy’s career ended in disgrace; his downfall hastened when an Army lawyer, Joseph Welch, confronted him at a hearing with the question: “Have you no sense of decency, Sir, at long last?”

“We face just such a time now. We have again forgotten who we are supposed to be,” Flake wrote. “There is a sickness in our system — and it is contagious.”

Flake has contended in interviews that the Republican Party is at a tipping point, or close to one, and others will start to speak out, too.

There was scant evidence of that Wednesday on Capitol Hill, aside from the few Republicans in the House and Senate who have already made public their grievances with Trump. Nearly everyone else dodged questions on the topic, voiced unqualified support for Trump, or answered by saying that distractions aside, the GOP must remain focused on passing landmark legislation to simplify and reduce taxes.

After a drought of legislative accomplishments so far this year, a tax bill would give Republicans a major victory and a powerful argument for retaining their majorities in next year’s midterm elections, something the lawmakers desperately want.

“You know my answer. I’m focused on getting stuff done,” said Sen. Rob Portman of Ohio, when asked about his colleagues’ criticisms of Trump. “He was elected. I disagree with him fairly frequently, and I do so publicly and privately. But I want to work with him to get stuff done.”

“I am just not going to engage in that conversation at all. There’s no benefit to anyone,” Scott said. “At the end of the day the goal is for us to keep the focus on the American people and tax reform that will help them keep more of their money.”

Sen. David Perdue of Georgia was even more direct. “We’re all professionals here. These two guys can say and do what they want to do. But right now, we’ve got a bigger issue, and the bigger issue is to get this tax bill done,” he said.

In addition to their desire to get results on taxes, many GOP lawmakers confront the political reality that despite Trump’s relatively low poll numbers nationally, he retains the loyalty of a segment of the party’s base that nearly any Republican needs to win re-election. Trump has shown he can turn viciously on critics, and few want to find themselves in his Twitter crosshairs.

Flake and Corker raised the question: Will the GOP ever part ways with its mercurial leader? Certainly not anytime soon it appears.