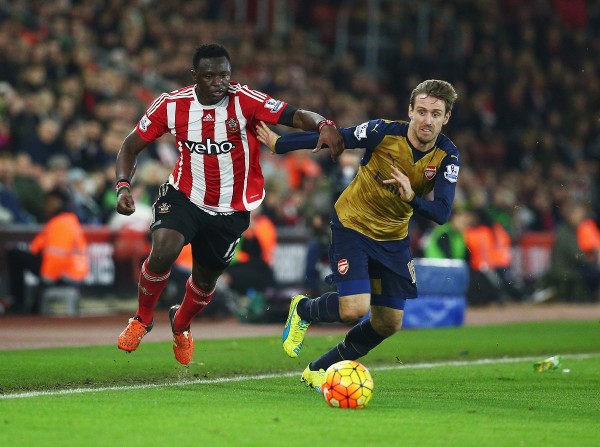 Arsenal played host to Ronald Koeman’s Southampton at the Emirates Stadium on Sunday, where a win would have seen them keep pace with Leicester City in the race for the Premier League title, but the Saints, who had inflicted a crushing 4-0 defeat on the Gunners at St Mary’s on Boxing Day held on to a scoreless draw that sees Arsene Wenger’s men now five points adrift of the Foxes and two behind Manchester City.

Jamie Vardy scored one of the goals of the season as he lashed an absolute blooter past a hapless Simon Mignolet following a long but perfectly placed ball from Riyad Mahrez to put Leicester City 1-0 ahead against the visiting Liverpool. Vardy was on the scoresheet once more to help his team to a memorable 2-0 win. This was supposed to be the first of three-match run where the Foxes were likely to drop points, but they didn’t look like doing so and certainly gave a good account of their title challenge before they take on Manchester City this weekend which will be followed by a trip to the Emirates Stadium.

Two strikes from Harry Kane and an early goal from Dele Alli were enough for Tottenham Hotspur to see off the challenge from Norwich City at Carrow Road. The three points have placed Spurs fourth, and they are tied with bitter north London rivals Arsenal on 45 points.

Manchester City had to scrape their way to a 1-0 win against relegation strugglers Sunderland. Sergio Aguero put the visitors ahead in the 16th minute, but the Citizens had to rely on the heroics of Joe Hart to take the three points home.

Jordan Ayew let his team down with a first half yellow card, and West Ham United made full use of the one man advantage as they won 2-0 courtesy of a goal each from Cheikhou Kouyate and Michail Antonio against Aston Villa. The Villans are rock bottom in the table and increasingly look a surety to spend the next season in the Championship.

Bournemouth were 2-1 winners against Crystal Palace and have now moved 15th in the league standings while the Eagles are now 12th with a haul of 31 points – three more than Eddie Howe’s men. West Bromwich Albion managed to grab a late point against Swansea City following a 1-1 draw.

Manchester United finally treated their fans to some exciting football as they romped home to a 3-0 win over Stoke City, with some nice attacking play between Wayne Rooney, Juan Mata and Anthony Martial. Jesse Lingard, Rooney and Martial were the scorers for the Red Devils at Old Trafford.

Watford held Guus Hiddink’s Chelsea to a scoreless draw at Vicarage Road to move ninth in the league table with a tally of 33 points. Meanwhile, the Pensioners are now 13th with 29 points.

Everton were 3-0 winners against Newcastle United courtesy of an Aaron Lennon strike and two late penalties from Ross Barkley. It was the first win for the Toffees at Goodison Park since November; however, Newcastle remains in the relegation zone despite heavy spending in the January transfer window, piling pressure on manager Steve McClaren.