Home All News Paul George Learns Think Before You Tweet 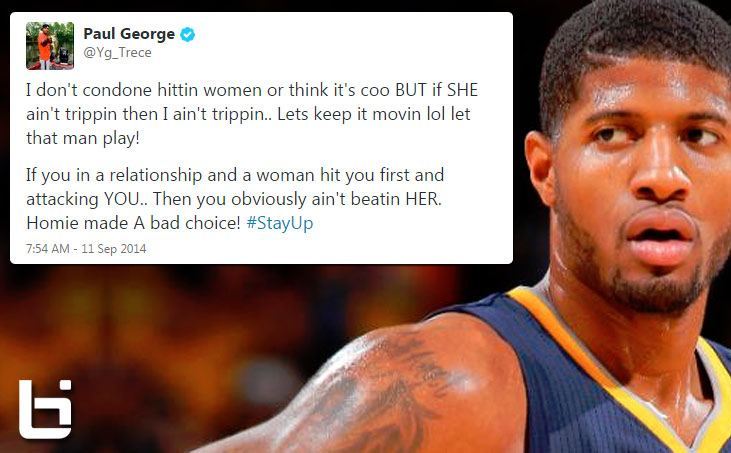 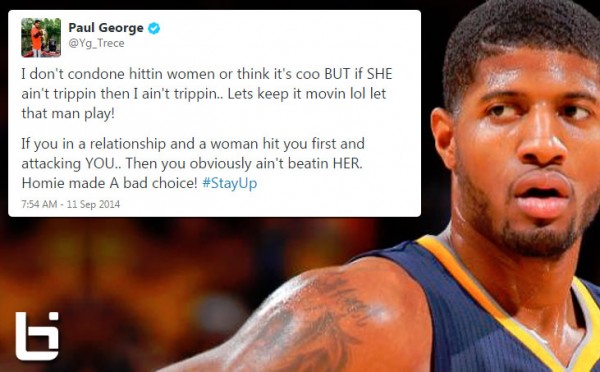 We have seen it time and again. Athletes take to Twitter to spout off about the latest news item, an opponent, or just their general opinion. Most of the time these tweets go unnoticed to the general public. But when an athlete tweets something really stupid or inappropriate it blows up in the Twitter space and makes the mainstream news.

There were a few of these tweets that popped up on the national radar involving the Ray Rice domestic abuse video. Paul George of the Indiana Pacers had this to say, “If she ain’t trippin, then I ain’t tripping, LOL. Let the man play”. Evidently George thinks it Ok for a pro athlete to throw a devastating left hook at a much smaller woman that ends with her head upside a metal railing. Of course the NBA baller later deleted the tweet and apologized like most public figures do when they screw up. If there were no backlash from the public, he would have been fine leaving his comments up on Twitter. Social media, especially Twitter, lets our thoughts escape our heads quickly and be put into text form. That is a very cool thing, as it gives us all a good view of the people around us in this world and what they are thinking. I don’t know if Paul George is a terrible person or not. But those Twitter comments sure don’t make me want to get his autograph or pay for a ticket see him play basketball.

I love Twitter and the glimpses it gives us inside athlete’s domes. It makes writing posts like this fairly simple…..check Twitter for idiotic sports thoughts and crush the tweeter. If I were managing an athlete, I would offer two choices when it came to Twitter and other social media outlets. They should not post anything ever….best choice. Or they would sign up for a filtering service to delete any posts that could embarrass their team, family, community, and generally show their lack of self awareness. Deleting a post before it is live on Twitter is much better than having to backtrack and delete it after it has been online for even a brief time. There are reporters and regular Joes just combing through the internet, ready to screen shot the next stupid tweet from a celebrity, athlete, or politician. It is like mining for gold.

I love the freedom of speech we have in this country. But that freedom is not free from public scorn if you say something offensive enough. Some athletes just don’t know what they are saying before it comes back to bite them. Then it is too late. I almost wish Paul George would not have apologized. Apologies after one is widely criticized appear like empty gestures. If George was being true to himself, he would say that he meant every tweet. but of course, he knows that would bring him more trouble in the form of fines, possible suspension, and even some protests of his own to deal with. Evidently he didn’t want any part of those scenarios. So he backtracked just like so many public figures have done in the past.

There are many sides to most stories and people should be able to voice their opinions. But there are times when right is right and wrong is so wrong that it should be apparent to anyone. The Ray Rice incident was one of those times. Paul George stepped in it big time, but he wasn’t the first and won’t be the last. The next dumb thought is a tweet away.