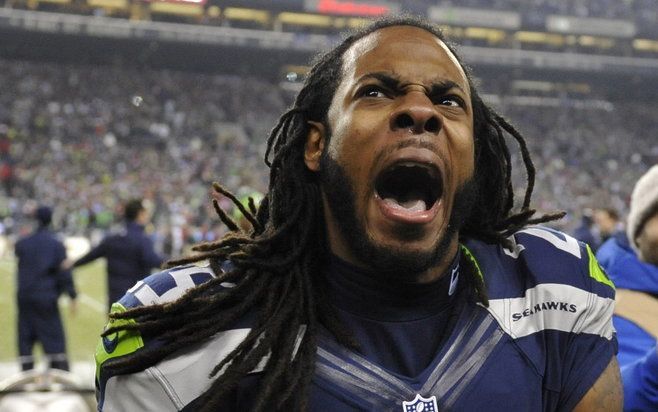 The Seattle Seahawks are starting the new 2014 season off just like they ended 2013. They are hammering the opposition with authority on both sides of the ball. The Seahawks defense made the Packers look like a mediocre team in the opening week of this fresh season. A big part of the defense is of course Richard Sherman. The loud-mouth cornerback made big news when he went on a post-game rant after last year’s NFC Title game, proclaiming himself the king of cornerbacks and assuring the world that the receiver he covered was indeed a “sorry” one. That rant led to many fans hating on the guy, along with a few racists comments on the player, and some analysts were shocked at his arrogance. What some viewed as a big negative turned into some big money for Richard Sherman in the end though.

Sherman already had some endorsement deals before he became twitter famous and was featured on every TV sports debate imaginable. But after the NFC Title rant, then the Super Bowl win, his opportunities for getting paid off the field went crazy. Companies wanting the brash corner from Stanford to pimp their products came out of the woodwork. It turns out that if you run your mouth and get national attention for a couple of weeks around the Super Bowl, you become very valuable. Before you athletes with bragging skills and no game get the wrong idea, Sherman is valuable because he IS at the top of his game. He is one of the two best cornerbacks in the NFL. So when he runs off at the mouth, he can back it up with his play. If he was just average, his rant would have been funny for a bit, then he would have been shuffled to the back of the deck of helmeted anonymous NFL defensive players.

Richard Sherman was not a first round pick that came into his own after a couple of seasons. He was the 154th player taken in the 2011 draft. He is now one of the highest paid cornerbacks in the NFL. So much for all the NFL draft experts knowing what they are doing. If they were so smart, Sherman would have been a top 10 pick.

I am not usually a fan of athletes with big mouths, but I do like guys that are different. Being able to back up the talk is key as well. I was never a big fan of Deion Sanders, who took showboating to a whole new level and loved to talk about his own greatness. But what could I say about him? He was the best cornerback in the history of the NFL. He made other great athletes look average, so he was free to talk all he wanted. He may have been annoying to me, but his game provided back up to all his swagger. For people that hate Richard Sherman, they face the same problem. He is damn good and he is young. So this trash talking, ball hawking, receiver blanketing cornerback is going to be here for a while. He has a long career in front of him and I hope to see more moments that create polarizing national debate from the guy.

It is a shame that it took an epic interview at the right moment to get Sherman the rightful attention he deserved. Defensive players just do not get the kind of respect and coverage they should. Sure, the experts love to point out great defensive efforts. But main street USA loves offense and scoring. That is why Peyton Manning rakes in so much cash from endorsement deals and seemingly appears in more pizza ads than “Papa John” himself. Quarterbacks get much more face time during live games. Cameras are focused on them on the sidelines between plays with their helmets off. That might seem trivial, but NFL players are less recognizable to the average fan because they are all covered up in helmets and other gear. Five minutes on camera per game for a quarterback with his helmet off is more than any other position will get all year usually. Advertisers need players that are easily identified by John Q. Consumer. Sherman’s loud mouth antics made him very easy to identify. Peyton Manning can just be a nice guy with a good sense of humor, but a defensive player has to have something special to get the attention of potential advertising executives. Sherman has that “it factor”.

If there are still folks out there who think that Richard Sherman is just another blow-hard dumb jock, they need to pay closer attention. The guy graduated from Stanford with a communications degree. Dude is not dumb by any stretch of the imagination. He knows what he is doing on and off the field. His specialty is communicating for Pete’s sake. Any product in need of promotion, I am pretty sure he can handle the task. He has done a tremendous job of marketing himself after all. That was the hard part. Now that he has broken through the barrier of anonymity that comes with the defensive side of the ball, he will continue to rake in more cash off the turf. He already has a multi-million dollar contract with high-end beef jerky maker, Oberto. He has been in Madden commercials as of late. Several regional companies had already signed the shutdown corner to endorsement deals before he got major attention.

I hope Sherman plays at a high level for years to come. If you are tired of his act, then you better find other sports to watch. I can see him dominating receivers for quite a while. I can also envision more and more commercials with his face involved. Oh by the way, when he retires he will likely just move into an analyst job covering the NFL. Bright, opinionated, and charismatic players are known to get those jobs. So those that are Sherman haters are not going to shake him anytime soon. Neither are any of those “sorry” receivers.