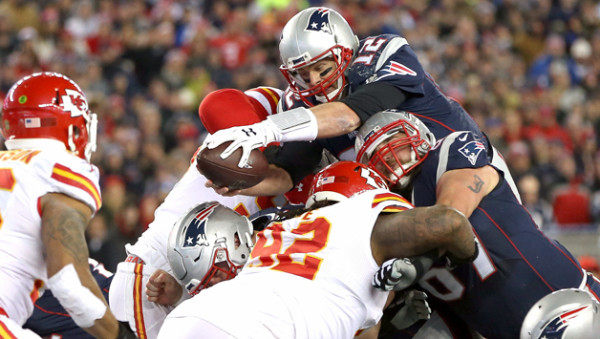 Kansas City may have came into this game with an 11 game winning streak, but had dropped five in a row in Foxboro. The Patriots don’t lose at home, but would be tested as their beat up offensive line took on the stout KC defense.

The two opening drives were impressive as both teams marched down the field. Brady targeted Edelman four times in the wideout’s return from injury. Gronk was big on the drive with a 32-yard catch, and then capped that with a TD catch to put New England up 7-0. No runs the entire drive.

Kansas City answered with a 17-yard drive that saw Alex Smith convert a big third and 13. The Chiefs offense was just as impressive as New England on the initial drive, except for settling for a field goal at the end. KC would need sixes, not threes to win on the road. 7-3 Pats still up.

The next three drives would all result in punts by these AFC contenders. The Patriots were targeting Edelman like he was the only receiver on the roster as #11 finished the half with 10 targets. There were several drops by the New England receiving corp that had Brady pissed.

Kansas City’s run game was very effective while Robert Kraft’s lawyers were looking for a loophole to get a refund from Steven Jackson.

The Patriots did manage another score before the half as they chewed up 98 yards on the way to a touchdown to go up 14-3 on KC. Brady found Keshawn Martin on a key play for 42 yards, and the offense benefited from a roughing the passer call on KC.

Brady ran the ball inside the ten-yard line and appeared to get enough of the pylon to tally six points, but the refs didn’t agree. CBS’ Mike Carey’s insight was almost as valuable as Steven Jackson’s contribution to the running game. No matter, the tough SOB took it in on the next play on a quarterback sneak to go up 14-3, advantage Pats.

Alex Smith managed to get his Chiefs down the field at the end of the half but had to settle for a field goal after missing high in the end zone twice. Brady’s accuracy compared to Smith is the difference in red zone opportunities so far. KC got a field goal again to make it 6-14 at the half in favor of New England.

The second half saw the first turnover of the game when Knile Davis gave up a fumble to the Patriots defense. Brady would make the Chiefs running back pay as he added another score on the ensuing drive, finding Gronk once again for a score. 21-6 Pats and looking like they were about through with their challenger.

The Chiefs did answer however as KC converted another fourth down then finished off with a touchdown pass to Albert Wilson. 21-13, Pats still ahead.

New England managed a field goal after getting the ball back despite Brandon LaFell looking as though he doesn’t even practice with the Patriots. The Chiefs had a shot at an interception on this Patriots possession but failed to capitalize on the opportunity.

Belichick and company would add another three points after getting good field position on a Danny Amendola punt return to go up 27-13.

KC would not throw in the towel as they moved into scoring position late in the fourth. They crossed the goal line after wasting tons of clock to make the score 27-20 with 1:13left. The slow drive with time so crucial was reminiscent of the Eagles Patriots Super Bowl game when Donovan McNabb acted as though his team was ahead as he let the Andy Reid coached Eagles waste precious seconds as they tried to mount a late comeback.

The only hope for KC fans was to get the onside kick. New England put the game on the line with a wall of blockers in front of one Rob Gronkowski, who was trusted to handle the onside attempt and end the game. That’s just what happened as #87 hauled in the ball along with the victory for New England.

The Pats will play the winner of the Pittsburgh Denver contest.