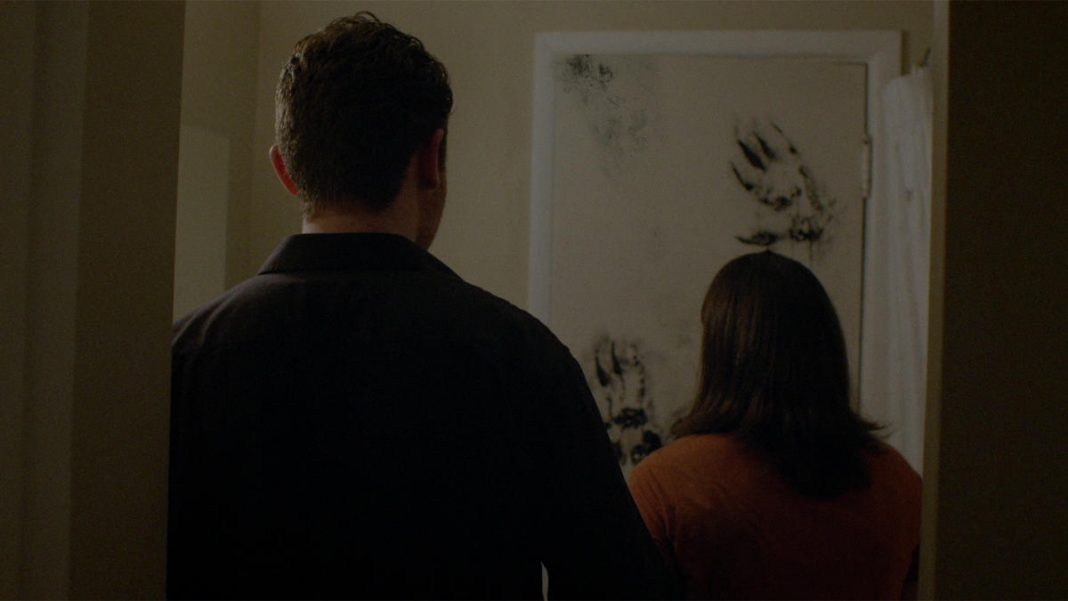 “Paranormal Witness” features The Mothman Curse in this episode but surprisingly doesn’t mention the exceptional film “The Mothman Prophecies” starring Richard Gere and Laura Linney. The film wasn’t as much on horror but grieving and loss, but it was a really strong character study of a town affected by the Mothman and then the loss that occurred shortly after.

Jeff and Krystle loved to take day trips and discover new places … places like Point Pleasant, West Virginia. The shop across the street from their hotel had several newspaper clippings on display about the infamous Silver Bridge collapse in 1967 … and its possible link to a winged entity known as the Mothman, which many have come to believe as a harbinger of doom or Angel of Death. The Mothman was allegedly first seen in one of the long abandoned WWII munitions bunkers at a local nature preserve; intrigued, Jeff and Krystle make the trek.

When they enter the bunker, Jeff decides to try some recordings, as the shop owner had told them that people have captured strange voices inside … especially when they ask questions. “Is anyone there? What’s your name?” Jeff asks, seemingly getting no response. Krystle gets an uneasy feeling and wants to leave; as they exit, is that the sound of … wings flapping, coming from somewhere in the darkness?

Back in the car, Jeff and Krystle play back the recording … and this time hear in a deep, raspy voice: “I am here.”

Jeff and Krystle are more than happy to return to their Maryland home, a good four hours away from Point Pleasant … although that’s where things really start getting creepy. Krystle gets repeated phone calls from a blocked caller, which result in either silence or strange chirping noises on the other end. Strange claw-like handprints appear on the bathroom wall, made of ash and soot. Jeff and Krystle listen to the recording they made in the bunker again, terrified of what they might have unleashed.

One night, Jeff was driving home from work late at night on an isolated woodland road, and his truck just went dead. At the same time, Krystle received another call from her blocked caller, this time greeting her with garbled, raspy voices. After a few minutes, Jeff’s truck started up again, and a few miles down the road he came across what looked like a hitchhiker wearing a long dark robe. As Jeff’s headlights illuminated the figure, it scurried into the woods with animal-like speed and fury.

Jeff and Krystle’s home becomes ever more the house of horrors as Jeff wakes up in the middle of the night to the sight of a dark figure moving back and forth along the window. Later, the kitchen cabinet opens by itself and a glass falls of its own accord, shattering on the floor. The most bizarre incident had all of their spoons and forks flying from the drawer of their own accord, bent and warped by an unseen force.

After doing some Internet research and reading several eyewitness accounts of Mothman sightings, Jeff and Krystle return to the bunker to confront the entity at the source. Krystle is too frightened to go past the main entrance, so Jeff ventures into the darkness alone, shouting “What do you want from us? Leave us alone!” Suddenly, Jeff is lifted into the air by an unseen force and slammed into the wall. “Run!” he screams at Krystle, and they race through the nature preserve, jump in their truck and burn rubber back to Maryland.

The next night, Krystle is waiting for Jeff to return from work and decides to take a shower. She sees what she thinks is Jeff’s hand pressed against the shower curtain, though her playful inquiries get no response. When Krystle pulls aside the curtain to investigate, she finds another claw-like handprint, this time on the bathroom mirror.

Jeff gets quite a scare as he’s driving home when a winged figure suddenly drops from the sky and lands on the road a few feet in front of his truck. The figure then rushed the truck, jumped on the hood and flew off into the night sky.

The last straw was Krystle getting one final phone call from her blocked caller, in which the raspy voice said, “I’m going to eat your light.” Krystle retreated to the bathroom, where globs of goopy sap-like gunk started hitting the mirror, the walls and finally Krystle herself. Where was this stuff coming from? Krystle and Jeff run from the house; when they go back in, the disgusting substance is everywhere, oozing down the walls and covering the floor.

Jeff and Krystle moved out, hopefully leaving whatever was taunting them behind.

Paranormal Witness 506 The Mothman Curse: Whatever Happened To Jeff Drenning:

The Mothman has made for one of the most befuddling and terrifying creatures of folklore since its first appearance in the Point Pleasant area of West Virginia in November 1966. Whether it’s real or not, it doesn’t seem to be leaving anytime soon …

We spoke with Jeff Drenning about the terrifying events depicted in Paranormal Witness Season 5, Episode 6: “The Mothman Curse.”

Have you always been generally interested in out-of-the-way adventures?
We’ve both had lifelong interests in the paranormal/unexplained, but this was our first foray into attempting an ‘investigation.’ Part of the allure that drew us to this area was the Mothman legend (mainly the Richard Gere film, The Mothman Prophecies), but also the American history that has taken place in the area as well.

When you first heard the words on the recording, what did it feel like?
Utter disbelief. It’s hard for words to capture the feeling we experienced upon hearing those first few words. We nearly went into a state of shock. We barely spoke a word to each other for the next few hours while we attempted to process what had happened.

When these things started happening in the house, did you connect them to the recording?
Definitely. Prior to capturing the initial recordings there was no activity of any form; we led normal lives.

The night where the cabinet opened and dishes shattered, and then when the spoon wound up in your bed, what did you think at the time?
We knew it was another manifestation of the activity we had been experiencing. It had taken many forms at this point to garner our attention, but we now realized it was getting more physically aggressive.

When you started researching Mothman, what was the most interesting bit of information you discovered?
Beyond comparison we found the most interesting aspects of the story to be those that weren’t typically known. We hadn’t heard about anything outside of the core Mothman sightings until our research led us to read John Keel’s The Mothman Prophecies. The events in Point Pleasant involved far more than the appearance of a winged cryptid. There were also strange phone calls to some of the Mothman witnesses, visits from ‘Men in Black,’ poltergeist-like activity and rampant UFO sightings throughout the region. We found that our experiences mirrored many of those that took place in the late 1960s.

Have you ever had a moment where you tried to think up non-paranormal explanations to what happened? What were they?
Our initial reaction to hearing the recordings was to somehow rationalize it. We attempted to explain it away via the possibility of someone having followed us and somehow managing to reply to our questions on the recordings.

This, however, would have been an impossibility. The bunker is in a completely desolate area, with only one access point (which we used). There were no other cars parked along the road where we parked, we saw no other people on the trail. We were completely alone, beyond a shadow of any doubt.

Also, the way the bunkers are constructed in a dome shape causes the slightest sound to reverberate and echo. If someone else was speaking from outside, we’d have heard the echo of their voice (just as we heard the echo of our own). The voice in the recording had no echo at all. It defied any reason we attempted to place on the situation.

As for the activity that followed, no, there is no possible way it has a rational explanation. Anything that happened to us and we attempted to debunk, we came up glaringly short. Simply put, there is no explanation for what we have experienced.

When did you decide to go back to the bunker to communicate with the Mothman?
We have always felt that whatever we communicated with at the bunker was some sort of ancient intelligence, which we believe to be connected in some manner to Mothman and the events that took place in Point Pleasant during the late 1960s. We went back the next day to attempt to further communicate with the entity. In the beginning we didn’t feel threatened; we felt as if something was reaching out to us for some reason, almost as if we were ‘chosen’ by it.

WHAT IS THAT TERRIFYING GOO?! What was the texture like? Where did it come from? What on Earth?
We have no idea what the substance was. It was a sticky, earthen-feeling texture. Almost like an extremely sticky form of mud. It would literally appear out of thin air. Krystle was once hit in the back with it while her back was turned towards the wall. It somehow manifested behind her. That was the scariest aspect concerning the goo, that it would literally appear out of nowhere with no warning.

How did you feel when you left the house?
When we moved out of the house, we initially felt hopeful that we could leave all of it behind. However, we were rightfully wary in the belief that if it followed us from Point Pleasant it could follow us anywhere.

Has anyone ever expressed skepticism in the story? What do you tell them?
Yes, but we simply state that what we experienced actually happened and all we can do is tell our story. The rest is up to them to decide. We’re typically very guarded in who we share our story with.

What kind of advice would you give someone who finds themselves realizing there is a presence?
First and foremost, they need to realize that it isn’t some type of game. Very real damage can happen. Don’t be afraid to seek help, regardless of whether or not you think people will believe you. They need to know there are things that can be done to empower yourself. We hope to turn our negative experience into a positive, and possibly help those in similar situations. We want to shed light on the fact that there is more out there than just haunted houses.

How is everything now?
We still have experiences to this day. Just last night we had knocking on our bedroom door. A few weeks ago I was touched on the shoulder by an unseen hand, and Krystle was awoken by a smack to the face. These are only a fraction of the continued experiences we’ve had. We’ve had a priest bless our home twice, which seems to help for a limited time. However, the priest has said that he believes an exorcism may be warranted.