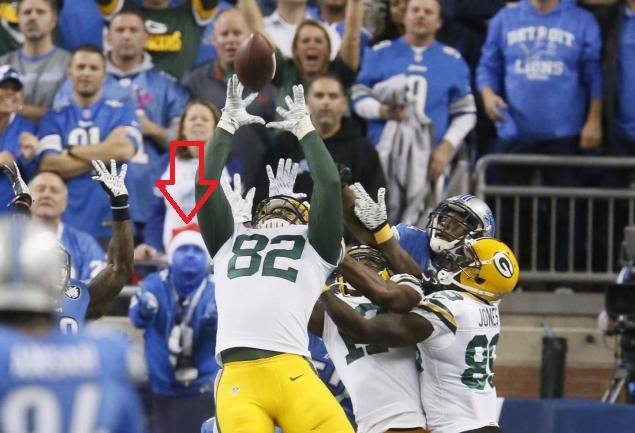 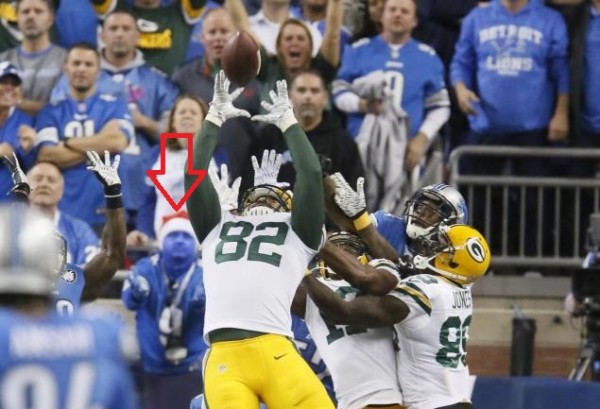 Green Bay Packers fans woke up elated on Friday morning after Green Bay came back from 20 points down to shock the Detroit Lions on Thursday Night Football. Lions fans woke up pissed off at the world and more directly at the refs who gave the Pack one last chance with zeroes on the clock.

The epic Hail Mary from Rodgers to Rodgers never happens unless the officiating crew has mercy on Green Bay by throwing a flag on Detroit for a facemask.

The Lions defense did exactly what was necessary to get the win despite letting the Pack back into the game in the second half.

On the second to last play of the game as time ran out, Aaron Rodgers was sacked by Detroit’s Devin Taylor. That’s the worst way for an offense to go out. Not even getting the ball in flight for a jump ball in the end zone.

The Lions did their job, only they got popped with the facemask call that gave Aaron Rodgers one more shot to launch the ball about 60 yards in the air for the win. Detroit’s nightmare was complete when Richard Rodgers came down with the ball for the touchdown. 27-23 Packers, ballgame.

Detroit fans are livid of course while Packers fans say this game is just payback for the Fail Mary from 2012.

I don’t blame Lions fan for feeling cheated. I’m sure they see this call as a gift to one of the biggest names in the game, Aaron Rodgers. No way Matt Stafford gets the same call on the last play of the game. That had to be the general feeling in Motor City on Friday morning. I’d agree.

As an unbiased observer I’d rather see the refs swallow the whistle on a last gasp play. No matter if one team has mounted a tremendous comeback, just like we saw in TNF with Green Bay. If the comeback falls short then so be it.

Needing a flag to help turn a nice try into a comeback for the ages takes a little mystique out of the game.

Of course we can go back through the game film and find numerous infractions that weren’t called. Even some that were similar to the play in question. Pics on Twitter showed a few from a Packers defender basically reaching inside an opponent’s eye socket through the facemask in a previous game this year.

No, call in that one. Thing is, everything gets magnified in the final minutes of a game.

The pattern in many historical comebacks is for the game officials to resist the urge to toss a yellow hanky when the chips are down. Or even pick the flag up. Think the Immaculate Reception and the Music City Miracle. Those game winning touchdowns could have been called back. But we know they weren’t.

In today’s NFL, defenses have a hard enough time stopping offenses who get the benefit of the League trying to protect the QB and receivers. If defenders are going to be flagged for ticky tack stuff in the last few seconds of every comeback attempt, then offenses end up with all the chips stacked in their favor.

Detroit made the play of the night when they sacked Rodgers with no time left. The best QB in the game only got a chance to be the hero because the refs helped him. For that reason today’s great quarterbacks can never compare to the Montanas, Aikmans, Moons, Kellys, etc.

The old school quarterbacks had to earn their fourth quarter comebacks. Just remember that the next time you see one of our modern passers with an unbelievable amount of wins after bringing his team back late in games. Not as hard to do now as it was in the 80’s, 90’s, and early 2000’s.

It sucks for Detroit to have a game end like that, not to mention their three game winning streak being no more.

But at least fans got to see an awesome Thursday Night Football game for once. And before long the record books will simply show this ending as another bookmark in the legendary career of Aaron Rodgers.

Only Lions fans will have the phantom facemask call burned into their memories forever.