Was it really a quest for getting rid of the superhero underpants or the difficult quest to rein in new readers and satisfy longtime fans at the same time? Both are difficult actually. For the longest time, many have asked the question on why superheroes wore their underwear on the outside. That fact has been parodied around many times. On an artistic view, it looked good, sort of defined the costume, made it stand out during action scenes but we’ve come to an understanding that the look has to go and for years it worked out quite nicely for both men and women, though not for everyone. One of those characters is Superman. While fans don’t mind getting rid of the underpants, the rest of his New 52 costume was just atrocious for many as well as his personality which seemed darker and this New 52 Superman is where Henry Cavill’s version is coming from.

For those not familiar, the New 52 universe is a reboot by DC to make their characters more relatable to the modern audience just like what Marvel did with its Ultimate Universe. The New 52 began with The Flash saving his mother’s life in the past (she was destined to die) and messed up the timeline. Pick up the DC Animated Film, Flashpoint Paradox for more on this, it’s great. The Flash then restores the problem but not exactly, resulting in The New 52 reality where the heroes’ stories are re-booted for the modern audience and give DC the opportunity to get rid of underpants. But the reality is just one fragment of several. More on that later. 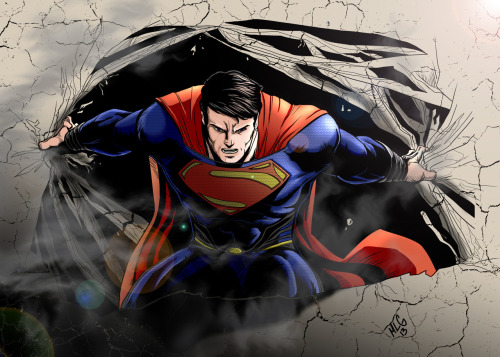 Superman ends up with some sort of high-collared, thin battle armor in exchange for his fabric/spandex suit. He ends up with blue boots instead of red and a weird-looking belt to more reflect his alien heritage. How he hides that collar makes the mind itch. He also has this new personality longtime fans were not comfortable with, the result of a metaphorical quest to find his place. Fast forward, this Superman died resulting in a transfer of his powers to Lois Lane (new Superwoman), Lana Lang (another Superwoman) and a Chinese Superman. The new Superwoman also died, and Lana Lang is undergoing the same process. After the death of the New 52 Superman, another Superman, the old one we’re used to known as Post-Crisis Superman, re-appears with his own version of Lois Lane who is his wife (the marriage was widely celebrated in the 90s) and their son, Jonathan Kent. They somehow survived the New 52 reboot. This version of Superman goes around in a black costume to help people so he can’t be seen but resumed the old costume with the low collar, red boots and underpants after the New 52 Superman died. Superman and Lois Lane assumed the identities of their dead counterparts. But there’s another mysterious version of Clark Kent roaming around. That makes three Clark Kents, still with us?

The problem here is not the underpants but with identification. In this new universe, fans and regular comic readers know there are at least two versions of Superman. New 52 and Post Crisis and those prefixes are stuck to their minds until DC finds a way or pull another reboot. The most recent Superman story finally puts an end to that by combining both versions of Superman and Lois Lane into one and solving the mystery of the third Clark Kent at the same time.

The third Kent turns out to be classic villain Mister Mxyzptlk. The magical guy whom you have to get him to say his name backwards to defeat. He took Jonathan hostage for an unknown reason. Post-crisis Superman and Lois Lane try to rescue him. So Superman battles Mxyzptlk for Jonathan and while Jonathan is trapped, he’s approached by the ‘essences’ of the New 52 Superman and Lois Lane. Jonathan helps bring back New 52 Superman and Lois Lane in the place of the post-crisis versions. While New 52 Superman is fighting Mxyzptlk, the essences of the post-crisis versions also present themselves to Jonathan and gives him their power. In the end, Jonathan escapes his prison, and the essences of post-crisis and New-52 physical versions become combined. Their memories, their personalities and maybe even their ages are averaged. The combination also results in a new costume. Oh and Mxyzptlk is defeated of course.

The new Superman suit is a combination of both old and new. The preferable thin material, the low collar, red boots, an alien-like belt with a buckle and no underpants. While the re-appearance of post-crisis Superman and his old costume was welcome, the underpants still presented a problem as well as his identification of being from another reality. This time, combined with New 52 Superman, Superman finally belongs in the universe. There is no longer New 52 and Post-Crisis, just Superman. One Superman, or at least until DC decides to get rid of, or change the name of the Superman from China.