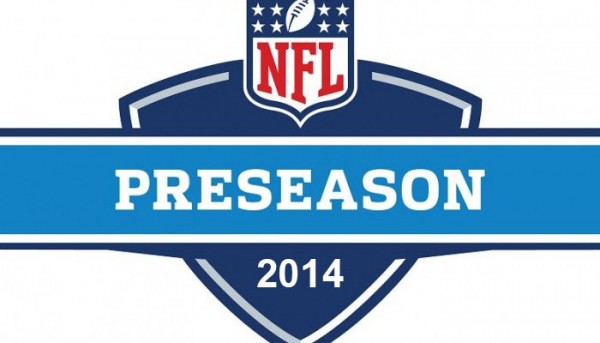 For all intents and purposes the NFL preseason is over. There is one more game for teams to play, but the starters are basically done. Roster cuts and personnel decisions are being made right now like a corporate firing wave. That is a fact of life in the pros. Don’t make the cut in high school or college, you still can attend school. Miss a roster in the NFL, and you won’t be signing any autographs at the stadium come week one. You might be working security at the stadium, but that will be about it.

Week three did shine more light on what is to come once the regular season starts next Thursday night on September the 4th. We know that Geno Smith will be the Jets starter, something I would have put a few dollars against. I felt like he had such a horrendous year in 2013 that Mike Vick would have little trouble unseating him. However, even Vick became more and more public about the fact that Smith was going to get another chance. He was the top pick for the Jets last year. They have to give him and their own decision making in the draft the benefit of the doubt I guess. I would doubt seriously he could have a worse year than his rookie campaign, but I may be underestimating his penchant for throwing picks. 21 INTs was not a great start to a career. It is usually the end of one.

Another name that has been tossed around a ton is Kelvin Benjamin, wide out for the Carolina Panthers. He has played well in the preseason, impressing coaches with his hands and big play potential. Seeing how the Panthers have little promise otherwise in the receiving corps, the rookie from Florida State may end up leading the team in receptions and any other category involving a catch. He has good size and might be the real deal. The Panthers and especially Cam Newton better hope that is so.

The Seattle Seahawks are playing the preseason like their heads are on fire and tail feathers catching. Scoring 75 points in their last couple games is not just a coincidence. They are putting in something to these exhibition games that is very unusual this time of year. It is called effort and enthusiasm. Can they keep it up for the next 20 or so weeks? That is what it will take to get back to the Super Bowl. Repeating is no easy task, especially in the NFL. Players are already comfortable since they make millions. Add in some success and the hunger sort of quietly goes away. We will see if Pete Carroll, master motivator, can get his team to buy in again. He got thousands to dump ice water on themselves for a good cause, so I would not doubt him in 2014.

With all the Johnny Manziel talk settling down for now, Blake Bortles is getting some due attention. The rookie played well for the most part in his opportunities through week three. He wasn’t perfect last week but he appears to be the top QB from this draft thus far. That could fall apart as soon as the real action starts, especially in Jacksonville. The Jags have gotten a few nods for being exciting on offense though. I will have to see it to believe it. Not sure where I would see it, as this team is not on national games of the week very often, or ever honestly. Look for the Johnny Manziel buzz to start back as soon as Cleveland sputters. I say week three is a good guess.

Julio Jones is getting plenty of love for his play thus far. He is a fun wide out to watch and I hope he does have his best year yet. I do think Roddy White is just better though, and I don’t know why he doesn’t get the attention Jones does. White may not be the speedster that the younger Jones is, but he is still the man in Atlanta. Julio Jones needs a couple more years to come out of that shadow. He will get there, but the big media people want to push it before it really happens.

Some quarterback play has been ugly this preseason. Colin Kaepernick has looked less than his usual self. His protection has not been great, so that is a big part of it. But he just got a huge new contract, so Niner fans don’t want excuses. Cam Newton looks rusty after coming back from his ankle injury of 2013. He needs all his parts to operate properly to make Carolina into a playoff team again this year. It may take him a couple more games to get comfortable with his ankle, which basically fell off his foot last year. If Oakland really thought Matt Schaub was the answer at the QB1 spot, then they are now being fed some reality. He is shot as a quarterback in this league. He now has a noodle for an arm, and the confidence of a freshmen asking out a hot senior cheerleader. The Raiders will continue to be the Raiders for another year it seems.

One QB who is surprisingly off, is Alex Smith. The usually steady game manager has been flustered so far in the preseason. He is not doing well behind a line that is shaky at best. The Chiefs will play a tougher set of teams this year as well. That will not make it quite as easy as 2013 when KC made their bones with some weak opponents.

Booing a QB in the preseason is a bad sign and a bad scene. Real bad scene. Buffalo has seen enough of EJ Manuel to tell he is not a viable answer for them. But they are stuck with him. There is not much else to turn to. If there were another option, they would be starting. It is a shame to see a very proud fan base suffer though a bad quarterbacking situation. But this is the NFL, and no one is going to feel sorry for them. My pity evaporated since that last sentence as well, as I look toward September 4th and the first regular season NFL game of 2014.